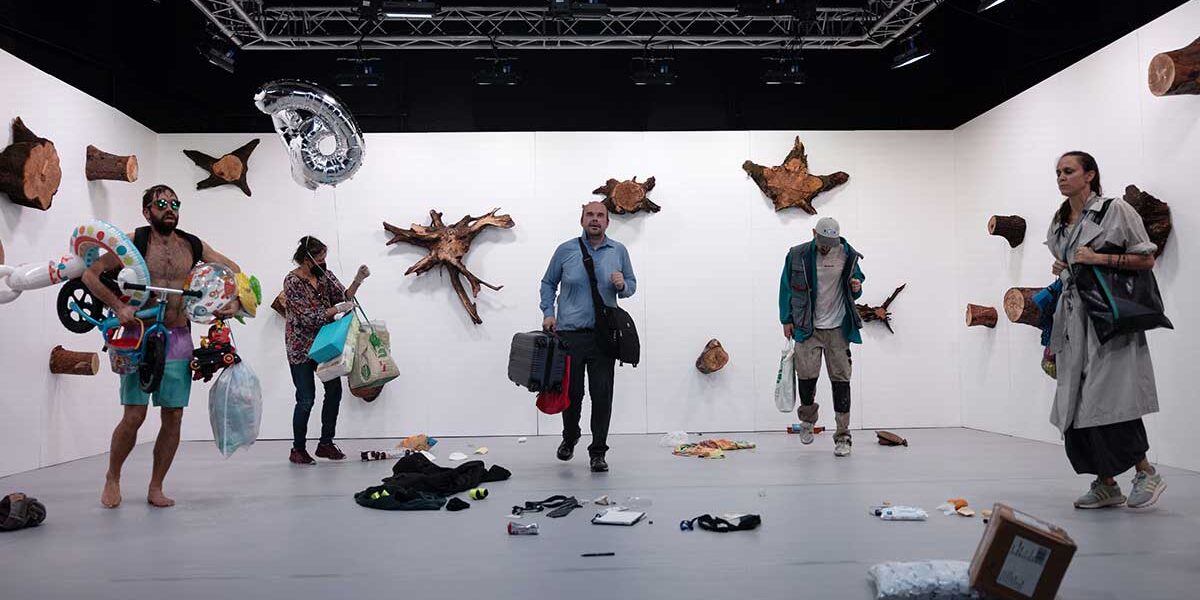 One by one, seven performers calmly enter the stage naked. The clothes are waiting for them on the floor, in between the four walls of a white box (set design: Igor Vasiljev).

The performers carefully get dressed, grab the props and start running. One of them is carrying a bunch of packages, the other files of documents, the third is carrying a children’s bike and toys, the fourth grocery bags, etc. Each of them represents a particular role – a postman, an office worker, a father, a housewife, etc. – but all of them are running mindlessly in one place even when the sweat pierces through their clothes and they struggle to maintain breath.

This situation lasts for about 45 minutes in the performance. But if we look at the metaphor behind it and if we interpret the seven performers as representatives of humankind, this condition has lasted for many decades, ever since capitalism became the dominant socio-economic system on planet Earth.

Crises, the latest performance of Slovenian theatre director Žiga Divjak, is centered on this metaphor. The show explores the themes of the climate crisis and the looming ecological catastrophe that are caused by humanity’s obsession with constant economic growth. In this show, Divjak continues to explore the climate crisis, as he did in his 2021 show Fever.

Crises not only had its premiere at the 56th edition of the BITEF, but the festival is a co-producer of the show, alongside Mladinsko Theatre and Maska from Ljubljana as two main producers, as well as Cooperative Domino from Zagreb as another partner. Crises is also complementary to this year’s BITEF programme which explored the broken relationship our society has with labor.

The core of the ecological agenda of Crises is its explicit and fierce anti-capitalist critique. Just like Fever, Crises is partly based on Less is More: How Degrowth will Save the World, a book by Jason Hickel that sees the root of environmental problems in the capitalist exploitation of nature. In addition, the show is based on Anna Tsing’s book The Mushroom at the End of the World, a study about the rare matsutake mushroom that turns into a parable of post-disaster existence.

Divjak and the dramaturg Goran Injac used the material from these two books to write an elaborative essay on the contradictions of the economic system that’s based on perpetual growth and the way that system destroys the environment. Although the essay is in a quite literal form, it is vividly delivered during the performance with a voice-over narration by Blaž Šef and supported by the electrifying music and sound design by Blaž Gracar.

This audio essay – broadcast while the performers are running – is the essence of the show, straightforwardly presenting its anti-capitalist and ecological idea. There is no time for subtle and clever metaphors because we are on the verge of a climate disaster. The essay traces the history of capitalism in its bloodiest forms – for example, how European wealth and entrepreneurship depended on slavery and exploitation of other continents – and underlines that these horrific crimes are not mere exceptions in the way the system functions, but its inherent nature. It is also noted that humans per se are not the reason the world is falling apart, but capitalism. Thus, the current geological epoch Anthropocene (the period when humans have the dominant impact on the environment) should be called more precisely Capitalocene.

After 45 minutes, the audio essay ends and the performers fall from exhaustion, their bodies scattered all over the stage. What follows is a post-apocalyptic scene when, ironically, the characters finally show some compassion towards each other. The cast members Sara Dirnbek, Iztok Drabik Jug, Klemen Kovačič, Draga Potočnjak, Katarina Stegnar, Vito Weis, and Gregor Zorc non-verbally play characters who support each other with their disabled bodies, they share food, water and even a cigarette. The show is reaffirming what we previously heard – when the exploitative system is gone, humans finally show their true, good side. It is “only” that the system is gone not through social change but through collapse together with the environment.

This last segment of the show is most susceptible to criticism. It’s like the director admits that the ecological catastrophe is inevitable and that humanity – or what remains of it – will show its good side only after that happens.

The way in which disability is depicted in Crises can also be interpreted as problematic. After the catastrophe, all the performers play disabled bodies – one bends his leg into his trousers, the other tucks his arms into his shirt. While it’s not entirely clear how these mutilated bodies came to be (the scene is more associated with a war or a nuclear disaster, rather than an ecological one), the disabled characters could be stereotypically seen as representatives of a collapsed civilization.

It could also be said that Divjak is more interested in delivering the message than in the theatrical form itself. Thus, the show has only three major artistic choices that are very simple – an informative audio essay, the running of the performers and the final collective scene of solidarity.

But since the existence of almost all the ecosystems on planet Earth is endangered by climate change, who can blame the director for being primarily interested in the message? Despite its simplicity and lukewarm pessimism, Crises are a valuable performance that not only shows us the full danger of climate change but gives us the tools to analyze the cause of the problem: capitalism.

Based on books: Less is More by Jason Hickel, The Mushroom at the End of the World by Anna Tsing

For more information on  this year’s BITEF festival, visit: bitef.festival.rs

Further reading: review of (Not) the End of the World (BITEF 22)

Further reading: interview with Žiga Divjak: “We must completely change our value system“