(Not) the End of the World The author of (Not) the End of the World – the prologue performance of the 56th BITEF – Chris Bush, has not written another lesson on environmental matters as the title might suggest.

Her text is a diagnosis of climate crisis that does not tell us aggressively something we already know. It promotes pluralism of opinions, shows different attitudes towards a number of topics related to climate change: birth rate, colonialism, educational system, the influence of the profession on politics, the dominance of big capital, etc. However, ecology is not the central theme, rather the conflicting relationship that society has with it. The conversations that take place generate words of trust and denial, courage and cowardice, struggle and surrender, hope and defeatism, power and weakness.

Chris Bush creates three situations: a young climatologist comes to an interview with a renowned professor with the desire to become part of her team, the consequences of the death of a female explorer on a research mission, and a eulogy. Tensions do not arise because of the progression of a single conflict between characters, instead the scenes represent fragmented situations in multiple variations.

Chris Bush builds a multiverse of dramatic situations. For example, in one version the climatologist comes to the interview on time, in another she is late, in one she arrives by taxi, in another by bicycle; in one scene the professor looks at her biography with approval, in another with disdain. These numerous variations change rapidly. An anxiety arises because of the multiplying of possible worlds in which the same people in the same situations represent different attitudes. In this way, (Not) the End of the World comes to feel like a theatrical, ecological version of the movie Everything Everywhere All at Once. 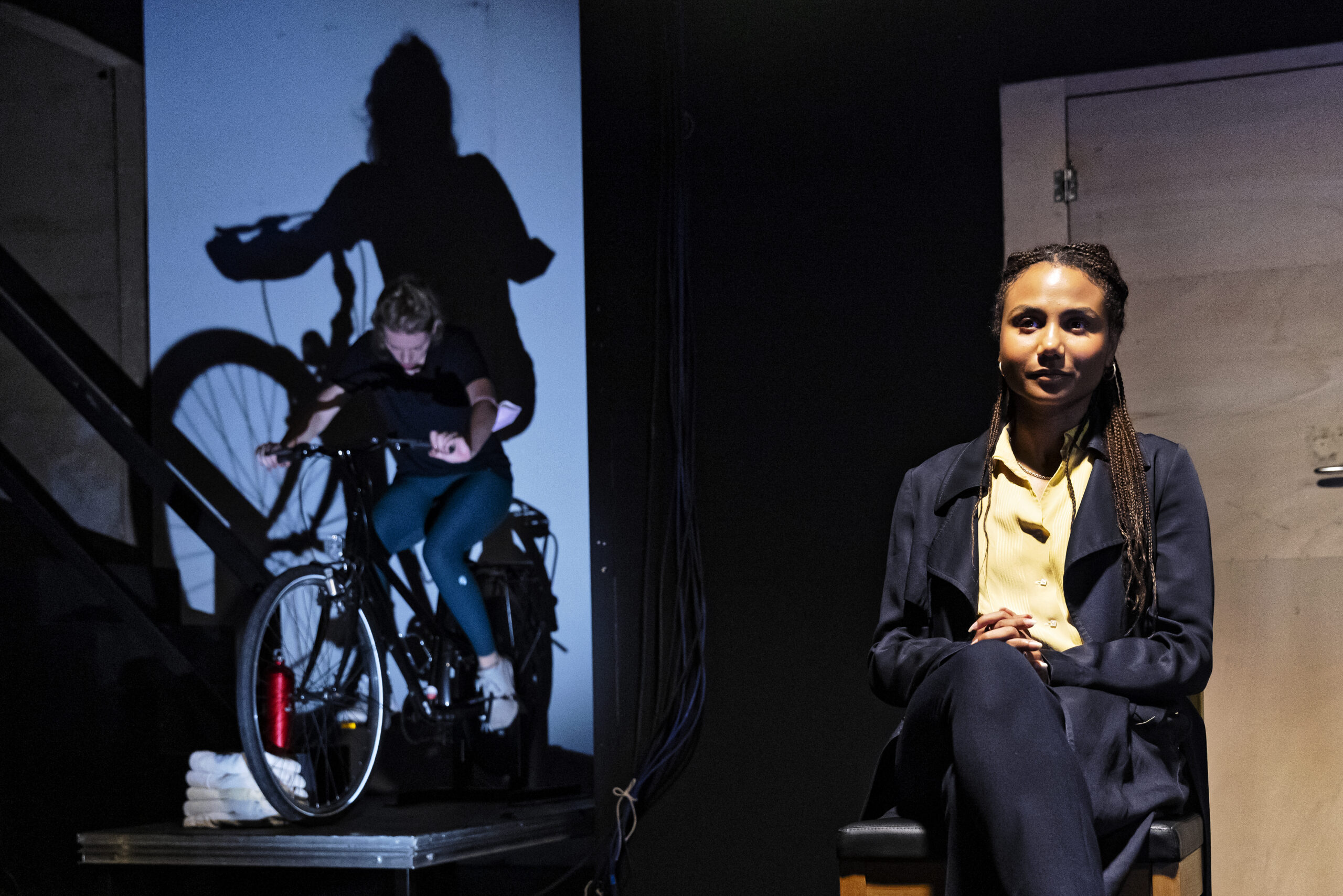 Renowned British director Katie Mitchell sets this piece in the context of self-sustainability, recycling and rewinding. The electricity that powers the lighting and sound system is produced on stage with the help of two bicycle generators, powered by two performers. The material for designer Chloe Lamford’s set and costumes is borrowed from other Schaubühne theatre productions. The consists of one wall and three doors. Countless variations of the same situation within the multiverse are not set up as the parallel situations in numerous worlds that fall apart in their own way, but as the repeated rewinding of one situation and its re-enactment in different ways.

The three actors Alina Vimbai Strähler, Jule Böwe and Veronika Bachfischer each emerge from their own door, briefly step onto the stage to say a sentence or two then walk backwards to the accompaniment of a squealing sound effect and exit the same door. This happens every few seconds during the entire performance. Mitchell has set up the heterocosmica of Chris Bush’s text in such a pronounced and at the same time repetitive way, with the actors constantly coming and going, that it becomes very tiring to follow. However, this is consciously made decision.

The three performers with equal ferocity and dedication enact a communication deadlock in front of us. There is something wrong with the relationships between the characters, which are evident from the fact that there is a need to repeat their communication in different ways. However, different does not always mean better. The repetition does not lead to progress because the characters are not aware of the rewinding of their lives. Anger, carelessness, hatred, arrogance, cynicism is repeated by the characters without awareness of the consequences. The researcher will die in every outcome.

No matter how many times she goes back and starts her speech again, the mourning daughter speaks emotionally and truthfully at her mother’s funeral. She is the one who brings out flowers and plants, the only thing that stay on the stage. The eulogy situation is resistant to this restart. Only in the universe where death has already occurred is there awareness of relationship between the cause and consequence, only the posthumous speech is resistant to the discontinuity of permutations and only it gives the impression of unity. This is a very pessimistic conclusion – true awareness of the consequences of our actions will only appear in the face of death. Only then do our actions become recognizable as mistakes.

Our individuality, our right to different opinions, the values ​​that modern civilization values ​​the most, are the source of our inertness in a situation when death approaches us. What is ecology in such an equation? Judging by the production (Not) The End of The World, ecology is a eulogy for humanity spoken in advance. When the time of apocalypse really comes, there will be no one to deliver the speech or to listen to it, and most certainly, there will be no one to admit what really went wrong.

For more information on  this year’s BITEF festival, visit: bitef.festival.rs