You are here:
kosovoserbiaswitzerland
Features 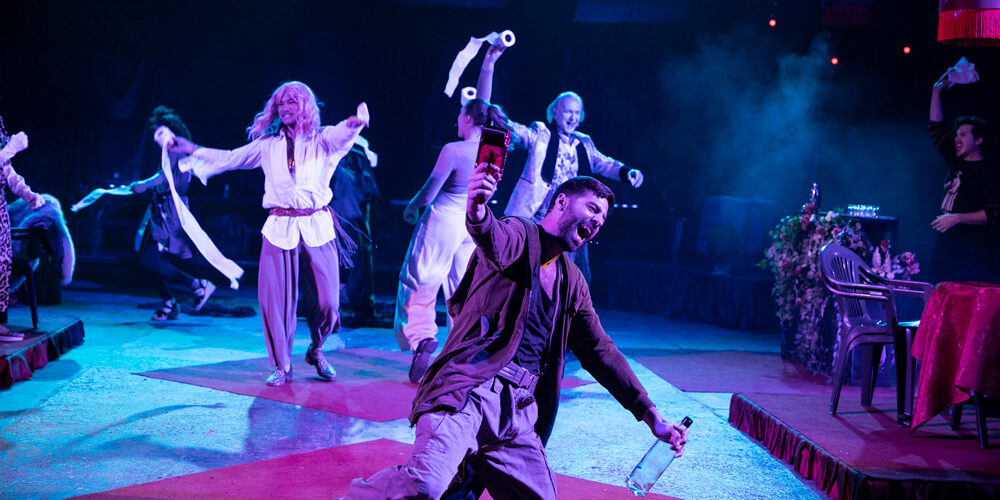 The fourth Kosovo Theatre Showcase was bigger and more international than in past years. Taking place predominantly in Prishtina, with excursions to the nearby towns of Gjilan and Ferizaj, international guests – theatre makers, programmers, journalists and critics – attended plays, panels and discussions over the course of five days.

It was my second visit and the issues from the 2020 edition of the showcase, such as the inadequacy of financial support from the government for theatre freelancers during the covid-19 pandemic – and issues with funding in general – still remain. Despite this, and the complex, time-consuming problems around exporting and importing work to and from Kosovo (because Kosovo is the only place in the Western Balkans whose people need visas to enter the EU), 2021’s showcase featured a major premiere (Balkan Bordello, an ambitious international co-production) and several shows in a new strand from visa-free countries such as Cyprus, Serbia and Switzerland.

This year’s showcase saw playwright Jeton Neziraj, whose company Qendra Multimedia organises the showcase, awarded the European Award for Cultural Achievement by the European Culture Forum for encouraging meaningful collaboration between Kosovo, Europe and the US, overcoming national and cultural-historical borders.

Democracy in art is constantly being redefined. Yet Kosovo, as a young independent country, has perhaps already defined it for themselves. Kosovo law demands that municipal theatres and its National Theatre employ long-term ensembles. This undermines the idea of the writer and the text as the heart and soul of theatre while also highlighting issues of state control, intervention and censorship. Artists in Kosovo are learning to question power structures by reflex.

Ironically Neziraj, arguably the country’s most successful theatre export, often plays with the idea of the writer, sometimes writing the least he can on the page and leaving theatre makers to interpret his scenes as they will.

Balkan Bordello, which premiered at the Oda Theatre, Kosovo’s only independent theatre, was eagerly anticipated (guests included new Kosovo Prime Minister Albin Kurti). It was an example of how Neziraj is encouraging collaboration across borders. Directed by his wife and regular collaborator Blerta Neziraj in a co-production with Qendra Multimedia, New York’s famous La MaMa theatre and Atelje 212 in Belgrade, Serbia, with actors from all three countries in the company, it was a turbo charged mash-up of theatrical styles and cultures. Some of the actors were from La MaMa’s own company, and their naturalistic style of acting – particularly that of Onni Johnson as Clytemnestra – rubbed up abrasively against the more physical style of Blerta Neziraj’s directing. Based on the Oresteia, Balkan Bordello reminded me of a quote from Che Guevara – “history finds us where we are born.” Which is to say, history finds us everywhere, if the history of violence and its perpetuation is universal as this play purports it to be -Kosovo’s problems, though particular, aren’t just peculiar to Kosovo, they are the problems of the whole world.

The play also spoke to a Western society which is starting to face its murderous colonial past. The character Pylades (played by LaMaMa actor John Maria Gutierrez) was here a dancer from Berlin who, arrives in Kosovo intent on “healing” the souls of those who have suffered during the war using his art. It seemed an apt way to address authorship and artistic responsibility, particularly those of Western powers and countries.

Bob Watson falls from the 9th Floor but does not die completely, another recent text by Neziraj, produced by Dodona City Theater, was inspired by playwright Eugène Ionesco’s The Bald Soprano and novelist Haruki Murakami’s The Elephant Vanishes. In the play, practically everyone is called Bob Watson in ta community. The real elephant in the room – also called Bob Watson- rebels violently in a zoo, and most likely against the absurdity of being called Bob Watson.

Directed by Erson Zymberi, the play seeks to find truth in which language obscures societal collapse, incompetence and corruption (a million Euros is somehow lost). It’s a tragicomedy and, if the images that Zymberi creates onstage are anything to go by, a comment on how language can become meaningless, how it is the basis for arbitrary laws that are not questioned by the hapless characters in the play. 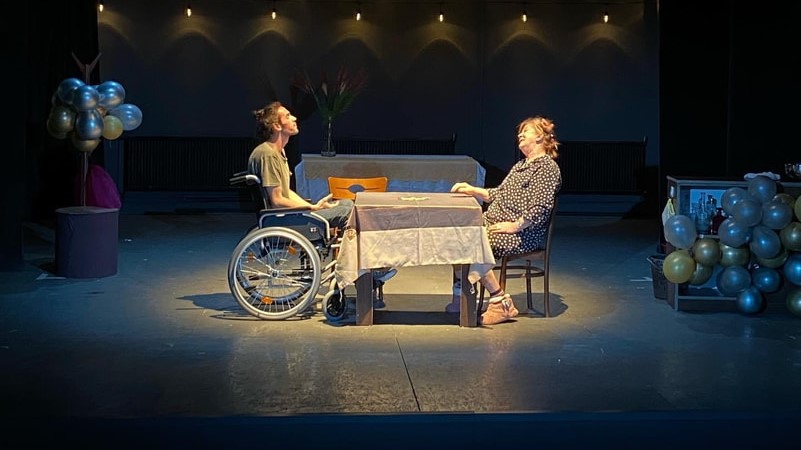 Birthday (My son just walks a bit slower), written by Croatian playwright Ivor Martinić, directed by Ilirjana Arifi and produced by Dodona City Theatre in Pristina, felt like an anomaly in the showcase. On the surface, this was an example of a classical kitchen sink drama with a put-upon mother struggling in her relationships with her own dementia-afflicted parents, socially ambitious daughter and seemingly disabled son who uses a wheelchair (whose birthday it was). The play seemed to be a tragedy of small-time domestic woes compounded by the Croatian patriarchal society – but this was not so; as the absurdist ending hinted, this was a metaphor perhaps for the blind dependence and corruption of all mankind.

For the first time, in a gesture that was at one a provocation and a means of highlighting Kosovo’s own difficulties in exporting work, the showcase included a strand of “productions from visa free countries.” This included works written by Neziraj. One of these was Madeleine’s Incident, performed by Cypriot company Pocket Theatre (acted by Andreas Nicolaides, Miranda Nychidou, Athena Savva and directed by Marios Theocharous), which used puppets to elegant and elegiac effect. The use of puppets was somehow fitting given that this show was about the Roma people, who are generally abused and alienated in European countries and having to fight systematic racism. 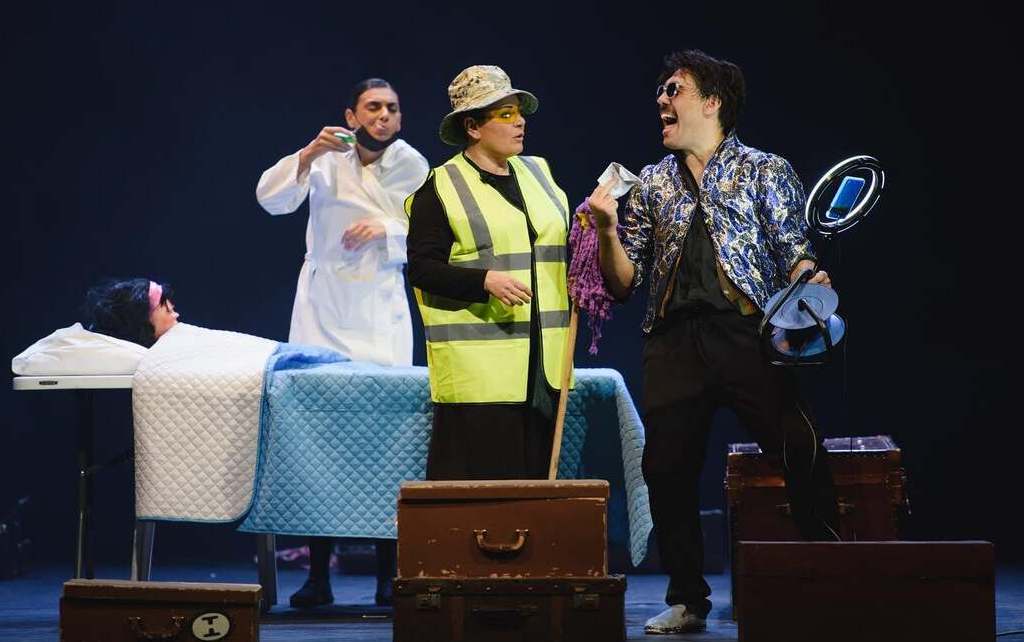 Another of Neziraj’s plays, The Swiss Connection, was a crime comedy, directed by Manuel Bürgin, a collaboration with Theatre Winkelwiese in Switzerland. This was a more classical retelling of the Kosovar Albanian liberation movement in the Swiss Confederation (with a cast including long-time Neziraj collaborator actor Adrian Morina) but with a modernist twist. If it seems odd that the visa-free strand was dominated by Neziraj’s writing,  it only serves to highlight the issues that Kosovo has with exporting work – it is much easier of course for a writer to cross borders, a writer who was forced out of his role as artistic director of the national theatre in 2011 and survives in the barely funded independent sector.  This strand featured other work, including The Double Life, by Daniela Janjić and directed by Maike Lex, produced by Schlachthaus Theater, Bern. Another, The Editor, from Reflektor Theatre in Belgrade, was cancelled due to illness.

The showcase also included older work, such as last year’s premiere The Return of Karl May, (a co-production between Qendra, the National Theatre of Kosovo and the Volksbühne in Berlin) a scathing comedy on the still popular German writer Karl May and on modern German attitudes towards the Balkans and the ‘east.’

Another earlier work, A.Y.L.A.N, was an ironic dark comedy on the refugee crisis produced by Gjilan City Theatre. Both plays were written by Jeton Neziraj and directed by Blerta Neziraj; both attacked the abuses of power and turbo-capitalism. Both are very much ‘theatre works’ as opposed to drama. The use of form was central to both. In The Return of Karl May, the storytelling device is as important as the story itself is. May is mocked by the use of the form that made his writing famous: the adventure narrative. (Europe’s hypocrisy over writer Peter Handke, who wrote a series of impassioned apologies for the genocidal regime of Slobodan Milošević, also comes under attack). 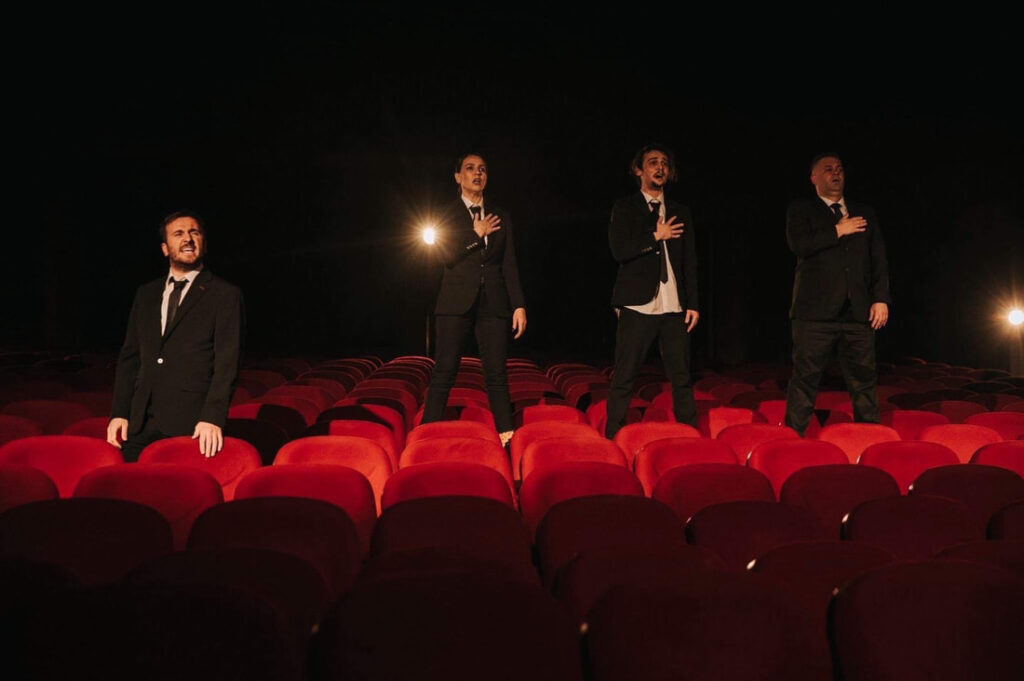 In A.Y.L.A.N, the author decentralises himself and the creatives and turns the spotlight squarely on the audience. Director Blerta Neziraj places the audience on the stage and the actors among the auditorium seats. A play about the refugee crisis, but not about refugees, it explores the Western manipulation of the continuing emergency, human need, greed and responsibility. Culpability is placed squarely at the audience’s feet. They are asked directly what they would do to help if they met a homeless refugee family on the street. 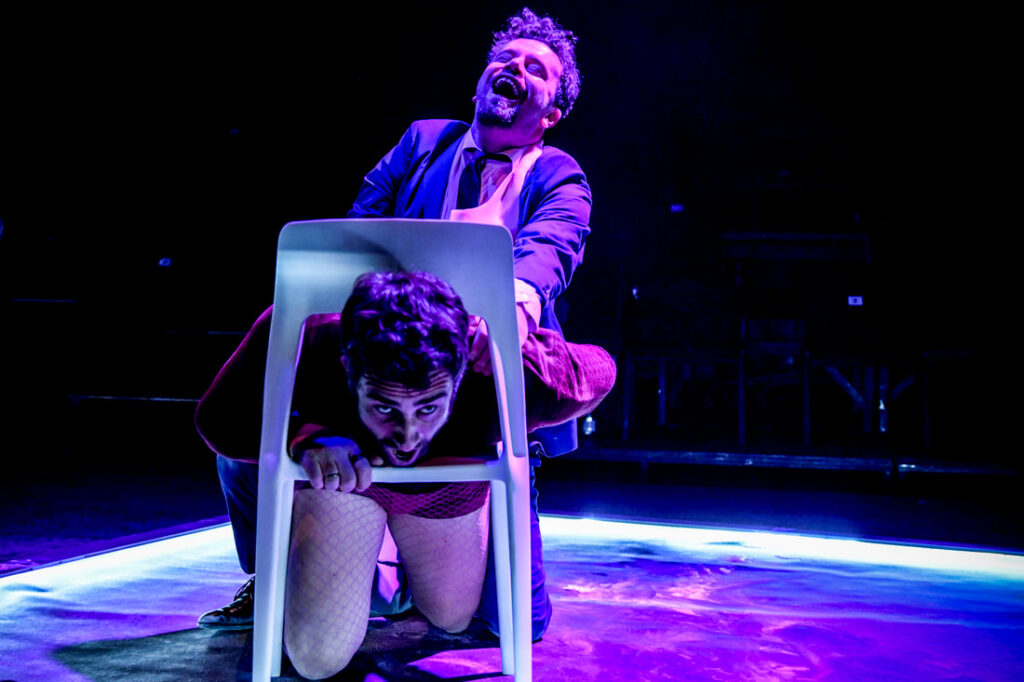 As ever at the showcase, the performances were supported by discussions and provocations. A debate (available to watch here) chaired by Polish theatre maker Nastazja Domaradzka who lives and works in Britain and which included NT Gent artistic director Milo Rau as a panel member, explored the politics of representation on stage, and Bosnian director Haris Pašović discussed his career and the evolving role of critics. He asked them to write about his work with understanding so that he in turn could determine his own artistic development. As a writer based in the UK , I am always given hope by the generous culture that this showcase encourages between journalists and artists. They key word was dialogue. It’s open and honest, unafraid of discussion and difficluty –  an environment I don’t always find elsewhere. 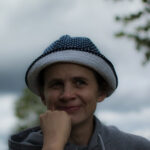 Verity Healey is a writer and critic published by The Stage, Open Democracy, Howlround, British Council, Calvert Journal, with editorial commissions for Belarus Free Theatre. She is a contributing author to Routledge Companion to Contemporary European Theatre and Performance (pub 2022).

Verity Healey is a writer and critic published by The Stage, Open Democracy, Howlround, British Council, Calvert Journal, with editorial commissions for Belarus Free Theatre. She is a contributing author to Routledge Companion to Contemporary European Theatre and Performance (pub 2022).