Zagreb-Belgrade via Sarajevo imagines a fictional journey taken by two of the most important Yugoslav writers of the 20th century – Miloš Crnjanski and Ivo Andrić.

Originally written for television by Jelica Zupanc, the drama shows the two of them travelling by train from Zagreb to Belgrade after the First World War, in 1919. At this time, they are still not the great authors we know today. On the contrary, they are traumatized young men who have spent their most vital years in the shackles of war. Crnjanski spent the war fighting on several fronts and in a Viennese hospital, risking his life for Austria-Hungary. He is bitter, restless, frustrated and impulsive from his experience in the trenches and the sicknesses he endured for the country that mobilized him against his will – which will become one of the main motives of his fictional universe.

He is haunted by the character of a soldier from the war who speaks the passages from the Diary of Čarnojević, the novel that brought Crnjanski recognition on the literary scene. In contrast, Andrić is a calm, measured and mild-mannered character, whose withdrawal from the world was probably increased during his stay in Austro-Hungarian captivity. He was arrested because he was a member of Young Bosnia, the movement that advocated for the liberation of the South Slavic peoples from the Austro-Hungarian occupation, whose membership included Gavrilo Princip, who assassinated Franz Ferdinand and thus started the First World War.

Zupanc wrote the play, which takes place in the years of the formation of Yugoslavia, in 1992, when the country was disintegrating in a brutal war. In the programme note, she suggests that her intention was to create a parallel between two young writers after the First World War and the young men who fought in the nationalist wars in the 1990s. In the context of destruction, death, loss and blood-stained memories, this story of two returnees from the war who shaped the national literature (Andrić won the Nobel Prize for literature for his work) should inspire hope in all those who were mobilized – to tell them that the future after the fighting can be bright.

Although neither Andrić nor Crnjanski were known to the public at the time, in Zupanc’s play the two have not only heard about each other, but they have cultivated a mutual respect – which, in Crnjanski’s case, sometimes transforms into envy.

Famous quotations and allusions to their yet-to-be-written literary achievements ripple through the dialogue. Travelling with them in their compartment are a doctor and a young lady, while a sailor joins them in Sarajevo. These three, as well as the soldier who appears to Crnjanski, are there to emphasise the character traits, intellectual abilities, artistic talents and inner restlessness of the two writers. The Doctor, for example, comes into conflict with the impulsive Crnjanski because Andrić is too mild to engage in any kind of quarrel.

The occasional apparitions experienced by Crnjanski and the polemical moments that erupt between him and the Doctor are not enough to compensate for the essential lack of action in the play and a plot that is almost non-existent. The drama consists of sporadic conversations in the train compartment. These are unconnected and random; sometimes some proverbial wisdom is uttered, sometimes the conversation moves in a certain direction, but this is soon interrupted, breaking this thread.

Crnjanski will start the conversation by bragging that his play Maska has been printed. Immediately afterwards, he complains about typographical errors, and about the fees of the other authors. Andrić will answer that he would like to work as a playwright at the Split Theater. Crnjanski adds that he thanks Andrić for receiving him in the editorial office of a magazine. He then suggested that the editorial office should be moved to Belgrade and begins to wonder if his exams from the Export Academy in Vienna would be recognized at the Belgrade university. Andrić comments on the climate in Belgrade. And so on.

These exchanges are full of biographical data, intended to demonstrate the writer’s knowledge of the lives, characters and work of the two famous authors.

Gorčin Stojanović, artistic director of the Yugoslav Drama Theater, has adapted Zupanc’s text, as well as acting as dramaturg, scenographer and director, but he doesn’t connect the imaginary events in the train compartment with a modern context. Instead, his production is of a sentimental nature, turning the original idea of ​​the play into a performance with a mild Yugo-nostalgic air. Stojanović himself states in the introductory notes that “what we live is a permanent post-traumatic stress disorder”. He does not say exactly what he sees as the problem, but he suggests that something is wrong and sees the consequences of the war as the primary cause.

Zupanc’s play is characterized by thematic vagueness; this is combined with directing that is also devoid of focus and clear ideas about what it is exactly that this play should deal with. Stojanović’s scenography consists of metal pillars that represent the railway station. At the top of these pillars is a platform on which the wagon is located. As the dialogue progresses, the walls of that wagon rise to dramatic sounds that suggest the turbulent disintegration of the world. But with lines that do not have the power to evoke any kind of chaos, this moving scenery is just an arbitrary and forced action. The culmination of this consists of the alternating projection of rails from the perspective of a moving train, images of the sky and flames. 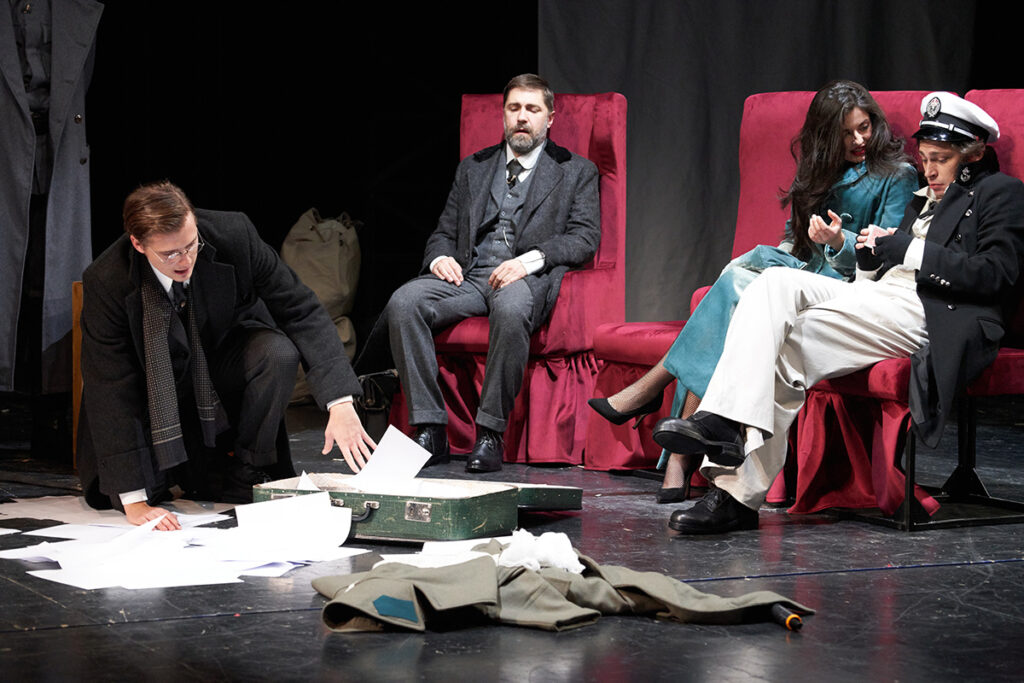 The cast of young actors display a passionate enthusiasm in the realization of their roles, but their dedication fails to bring meaning to the cacophony. Unfortunately, in some cases the performances contributes even more to the impression of irrelevance and irritability. Miodrag Dragičević is the most striking in this regard. He gives Crnjanski a high, squeaky voice combined with distinct grimaces of nervousness and anger. This over-the-top acting seems awkward and unnecessary. Aleksej Bjelogrlić has an easier task as the calm and reserved Andrić. He brings a dose of pleasant charm to the role. However, given the vague nature of the text, the young actors could not have gotten a better result.

Stojanović has significantly enlarged the intertextual web of the original play with the text of the Croatian classic Miroslav Krleža from his story Drunk November Night 1918 and with Andrić and Crnjanski’s poetry for whose verses Anja Đorđević has composed music. Joakim Tasić displays a fiery dedication with the role of a young soldier who speaks passages from the prose of Crnjanski and Krleža. But Nikolina Vujević has the unenviable task of singing these non-melodic songs with their emphasized expressiveness, and occasionally pronounced sexuality. None of this has a clear significance within the structure of the play. Gorčin concludes the performance with a scene in which the Soldier hangs himself in a completely unmotivated accompanied act by the song Train to the South by the famous Croatian singer-songwriter Arsen Dedić, an anthem of Yugoslavia accompanied by a projection of Crnjanski’s eyes and a video of the Nobel Prize being awarded to Andrić.

All this feels as if it should allude to the consequences of the sad disintegration of Yugoslavia, which Stojanović saw in Zupanc’s text. The problem is that Stojanović, with his position in a major theater institution, is able to succumb to his own obsessions and adapt a TV drama that has little to tell us about our contemporary problems. Not because Andrić or Crnjanski are not relevant today, but because their fictional appearance here does not say anything meaningful about our time.

The significance of this series of accumulated quotes and facts is extremely difficult to recognize. Stojanović doesn’t manage to make any sense of it all. The lack of thematic focus and the idiosyncratic nature of the direction gives the impression that, in this instance,  a public institution has been used as a private playground.