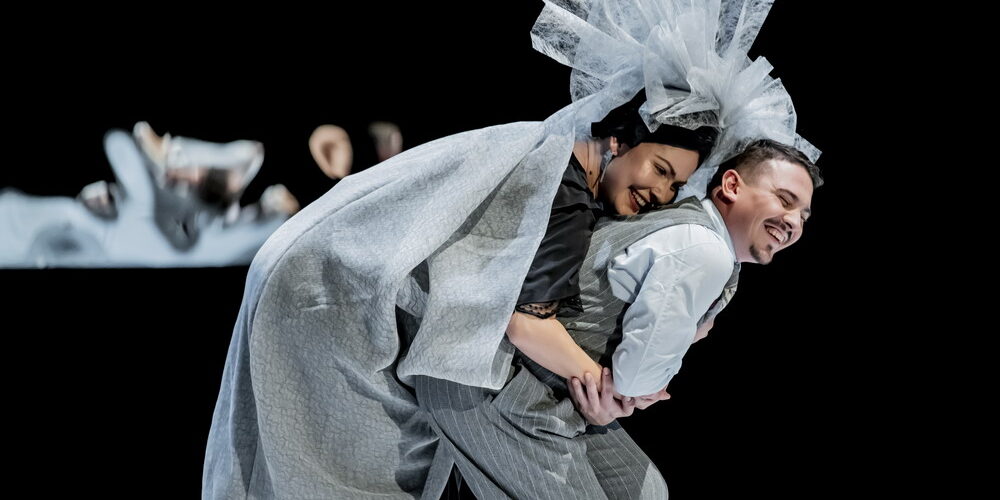 When I heard that the Pulitzer Prize-winning 2002 novel Middlesex by the American writer Jeffrey Eugenides is being dramatized at the Serbian National Theatre in Novi Sad, I was overjoyed by the fact that intersex people will finally gain some representation on the Serbian stage.

Although the situation has been improving in the last few years, gender and sexual minorities are still hugely underrepresented in Serbian theatre and there is no show with an intersex character that has been staged in recent history. Eugenides’ story isn’t liberating only because it gives a voice to its intersex narrator Cal, previously known as Calliope, but because it gives them space to talk about other topics such as Greek-American migration and the 20th century turmoil of the American society. In other words, a minority doesn’t stereotypically speak only about their condition, but about broad and important social topics.

However, the performance – adapted and dramatized by Dimitrije Kokanov and directed by Jovana Tomić – feels steps behind the novel in terms of its artistic analysis of these social issues. The director and dramaturg are an experienced team. They have collaborated before, most notably on the performance My Husband at Yugoslav Drama Theatre, a dramatization of Rumena Bužarovska’s short story collection exploring gender relations in traditional families in the Balkans. But it feels that Middlesex, a 600 plus-pages epic multigenerational story, is too complex to be faithfully dramatized in a two-hour performance.

Tomić and Kokanov decided to keep the outline of Eugenides’ novel, following all the major plot points. Cal narrates the story of their Greek family, and the story is at the same time re-enacted on stage, starting from his grandparents’ immigration to the USA from war-stricken Turkey in the 1920s.

Quickly we realize that they are not just lovers, but also brother and sister who found love in each other in a time of danger. Then follows the story of their cultural assimilation which gradually shifts to the story of Cal’s parents who lived through numerous hardships in America, including the Second World War, and who were also related – second cousins – amplifying later suspicions that Cal’s intersexuality is a result of their ancestors’ incest. Finally, the narrator is born at the start of the counter-culture in 1960, named Calliope since everyone thought of the child as a girl. Only later in adolescence do masculine characteristics arise that ultimately leads the narrator to identify as male and rename himself as Cal.

The most notable acting choice is that the narrator is played by both an actress and an actor who stay together on stage all the time. They narrate parts of the story directly to the audience and when interacting with other actors, one of them usually speaks while the other stays beside. Bojana Milanović is the younger counterpart representing Calliope while Branislav Jerković represents the older Cal, certain of his male identity.

While it might make sense from a plot point of view to represent two different gender identities in this way, as the narrator does in different stages of their life, it feels deeply problematic that the director represents an intersex character through gender binary.

Contemporary gender and feminist studies tell us that gender is a spectrum and that sex is perceived in society through the lens of gender – that it’s also a social construct – so it’s puzzling why the director chose to represent an intersex person as a combination of two gender-normative identities, with one of them “winning” at the end when Cal identifies as male.

Though this decision is quite controversial, the rest of the acting choices are more conventional. The cast enact the scenes indicated by the narrator. The acting is expressive, often exaggerated in a comical manner. Since there’s a large number of characters, some of whom only appear once or twice, the director and actors emphasize the comic potential of Eugenides’ text, giving one dominant and underlined characteristic to most characters. The most prominent of these is the pushy but humorous Sourmelina, a cousin of Cal’s grandparents with whom they take refuge when coming to America, skilfully played by Tijana Marković. Marković doesn’t shy away from showing her character’s self-assertiveness with supple and abrupt gestures and an elevated tone of voice. Another example of this device, albeit a less successful one, is Aljoša Djidić, as Cal’s brother whose affiliation to the hippie movement is shown with a caricatured gesture of meditation and loudly and tactlessly expressed political views. 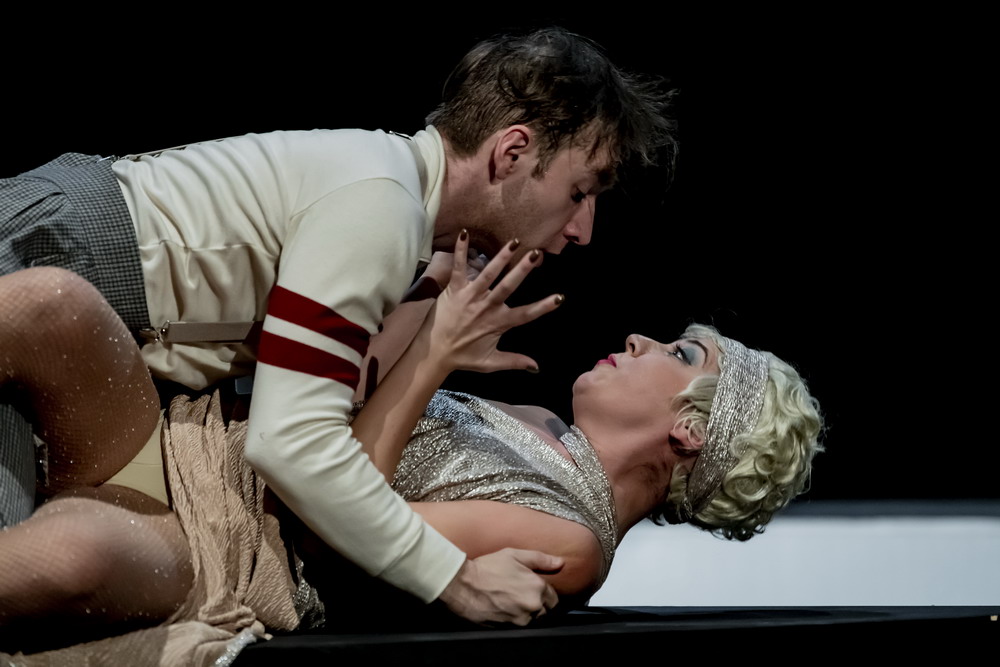 As entertaining as this is, the complexity of the novel is reduced to a story featuring typical characters with basic characteristics. The story is also reduced to its basic structure and plot points as if solely for the sake of telling it even though there are no characters to identify with on a deeper level.

Other elements of the production enhance it, such as the set design, by Jasmina Holbus, which is minimalistic but colossal at the same time, consisting of a rotatable circle and a half-circle with an empty centre. These objects can represent different settings, like a ship, an apartment’s furniture or a doctor’s office. Luka Mejdžor’s music adds an epic, emotive quality to the performance.

But those elements can’t substantially change its trajectory. If the novel Middlesex is a marathon through 20th century American history with in-depth artistic analysis, then the performance feels like a sprint through the decades where characters that might be complex on the page are mere signs by the road. The same could be said for the treatment of intersex identity.

Journeying down Jeffrey Eugenides’ adventurous, sociohistorical and introspective road isn’t an easy task. It’s courageous that these theatre artists embarked on such a mission and it’s admirable that there’s finally some representation of intersex individuals on the theatre scene – even if we may still ned to wait for a dramatization worthy of this complex novel.