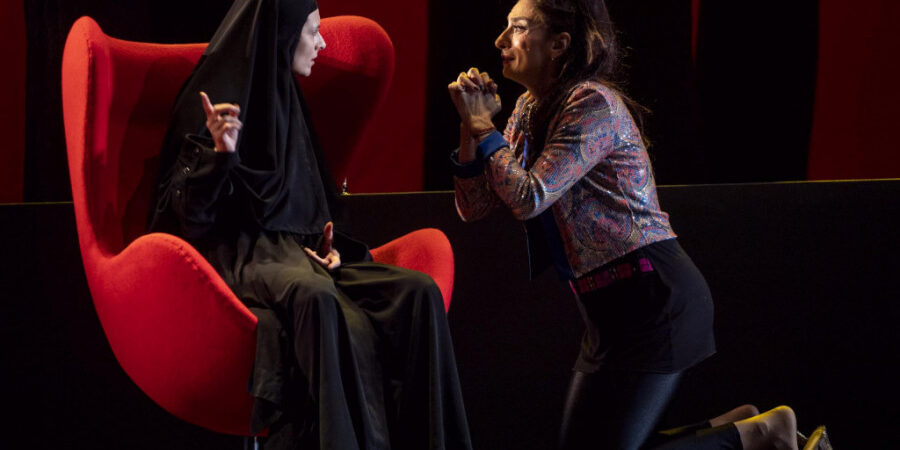 The title, Wolves and Sheep (Vuci i ovce) gives us a clue that this play –  written in 1875 by the Russian playwright Alexander Nikolayevich Ostrovsky – is about predatory and exploitative behaviour.

Director Egon Savin has ostensibly set the play in a modern society with an Orthodox Christian tradition. In the director’s notes, he states that he wanted to show that this exploitation is an essential part of human nature, that human relationships are based on material benefits, and that that’s the way it is and the way it has always been. But is this really human nature, or is it the product of capitalist patriarchy? Is it predetermined, or do we have free will to change things individually and structurally?

The plot revolves around a rich, young widow Yevlampia Kupavina (Anastasia Mandic).  Her wealth makes her  a target of Meropa Murzavetskaya (Olga Odanovic), a nun who wants to marry off her alcoholic nephew who has just lost his job because he was caught stealing. Since Kupavina is not interested in him, Meropa has to make a deal with the man that Kupavina is actually in love with, her former neighbour, Vasily Berkutov (Aleksandar Djurica), who is also attracted to young widow’s money and land.

Meropa wants to make a coalition with a future city mayor, so she  tries to convince Kupavina to run for office but then she makes a deal with Berkutov instead – and so a  deal between the church and the state is made.

All the relationships in the play are about business. The other characters include Glafira Alexeevna (Sonja Kolacaric), a poor young nun and a relative of Murzavetskaya who is determined to get married to Mikhail Lynyaev (Radoslav Milenkovic), a rich nobleman. She ultimately succeeds when she manipulates him into having sex and then accuses him of sexual assault, after which he has to marry her because he has dishonoured her.

Savin’s production doesn’t quite succeed, however, because he hasn’t found any appropriate analogies in the present. The characters’ motives are still those of 1875; for example, the nuns are still nuns, although today women would be unlikely to enter a convent since they are able to have an education and employment.

On the one hand, it is clear that the message here is that the themes of this play are universal, and that nothing has really changed, only capitalism has progressed, but on the other hand the production feels blind to the fact that a women’s revolution ever happened.

The choice of costumes is confusing. The nuns are dressed as nuns but the director has dressed the other characters in modern clothes (costume designer Jelena Stokuca). There are two different kinds of costumes for the female characters: shiny kitsch costumes, that are worn by Kupavina and her aunt, and the nun’s habits worn by Meropa and Glafira. There is a scene where Glafira opens up to Kupavina about her history before she came to the  convent. She tells her that she’d like to live a rich secular life and to have fun and to go to parties like she used to, and the only way she can do it is by marrying an old rich man, Lynyaev. In this scene she transforms from a nun to a sexually liberated woman with a tattoo on her thigh, and later she starts to wear fur and shiny clothes like Kupavina. Meropa also stops wearing her nun’s habit at some point in play and starts wearing a simple business gray suit. She is still not sexually liberated, but now she’s also become secular. The choice of women’s costumes make it feel as if the director is criticizing women’s emancipation from the church – and from patriarchal society.

The female characters are the most dominant ones, but they have to use manipulation to acquire power, because power is not something that belongs to women in a patriarchal society. Meropa is the best at this; she is never uncovered in her manipulation by the other characters. She’s the queen of this game, a wolf hiding behind a sheep’s facade. Odanović plays the role of Meropa as a woman who’s seen it all, who knows that the people around her are liars and hypocrites who think only of their own interests and try and curry favour with her. She’s fully pragmatic, playing the sinless nun when she deals with Kupavina, but she shows the audience that it’s just a facade; like Shakespeare’s Richard III, she’s a mastermind. Odanovic plays the villainous character like a cross between an everyday old lady and matriarchal queen. She’s very funny in her role of a wolf in sheep’s clothing.

The character of Kupavina is the only one who is honest the whole time. As portrayed by Anastasia Mandić, she’s the biggest victim of circumstances, she’s the sheep that everyone wants to shear. But her character is under-explored in the show, instead it feels as if  her “girl-boss” persona is being mocked. She’s a sad character and Mandić recognizes this sadness and plays her as a woman with not much will to live. Everybody around her is fake and trying to take advantage of her, but she sees through it, and gives them money anyway, like she’s accustomed to doing this. The only character that interrupts her dysthymia is Berkutov, the man she’s in love with, but he also wants her for her money.

Savin scenography is minimalistic and symbolic – a dark mysterious forest that belongs neither to the present or to the past, but to a world of a fantasy, the forest is a symbol of Kupavina’s money, the motivation for all the characters. There is also a black wall symbolising the monastery walls and one big red armchair where Kupavina sits, sad and alone.

Central to the show is its analysis of exploitative relationships and of how economic and political factors influence people. But there is little criticism of this exploitation. It is actually presented with sympathy, as the way it always was and always will be. In fact, the director states that this is human nature, and thus unchangeable.

But society has changed in the past 150 years since the play was written. Although we still live in a class-based society, people have fought and are fighting to overcome challenges on a personal and political level, to create change. Why aren’t we seeing plays about them? Why are we not seeing plays that inspire the audience to change things? Why are we non-critically staging and watching comedies in which we’re supposed to laugh at those who suffer in this way?

The metaphor of wolves and sheep is a very common one. But what we need as a society is to educate ourselves, to realise we can overcome if we try, not just to glorify and repeat and maintain it and call it a universal law of nature. This play is a product of the past and has its role in the history of drama and theatre. But since it was written, society has moved on and we have answers to some of the questions the play asks. A version of this play that acknowledges that would have been  a much more encouraging show to watch.

Savin has said that he likes to stage his shows again and again in different versions; perhaps he could stage this again, only with more awareness of the present.

Аdapted and directed by Egon Savin 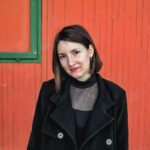 Mina Milošević graduated from the Dramaturgy Department at the Faculty of Dramatic Arts in Belgrade and studies Master studies at the Department of Theory of drama arts and media at the Faculty of Dramatic Arts in Belgrade. She writes theatre criticism for SEEstage, texts about theatre and film for the magazine Iz Off-a'; and hosts the radio programme about theatre Radio Nezavisna on Radioaparat. As a political activist, she campaigned for students and the right to a home (United Action Roof Over Your Head). She participated in the work of the Academic Film Centre at the 'Studentski grad' cultural centre, where she now moderates discussions about student protests in 21st century and works as a screenwriter on the documentary film about that subject. As a dramaturge, she staged the play Orlando by Tanja Šljivar and Goran Ferčec, which is performed at the National Theatre in Belgrade. She has written scripts for several short films and translated feminist texts.

Mina Milošević graduated from the Dramaturgy Department at the Faculty of Dramatic Arts in Belgrade and studies Master studies at the Department of Theory of drama arts and media at the Faculty of Dramatic Arts in Belgrade. She writes theatre criticism for SEEstage, texts about theatre and film for the magazine Iz Off-a'; and hosts the radio programme about theatre Radio Nezavisna on Radioaparat. As a political activist, she campaigned for students and the right to a home (United Action Roof Over Your Head). She participated in the work of the Academic Film Centre at the 'Studentski grad' cultural centre, where she now moderates discussions about student protests in 21st century and works as a screenwriter on the documentary film about that subject. As a dramaturge, she staged the play Orlando by Tanja Šljivar and Goran Ferčec, which is performed at the National Theatre in Belgrade. She has written scripts for several short films and translated feminist texts.