You are here:
BelarusUkraine
Features 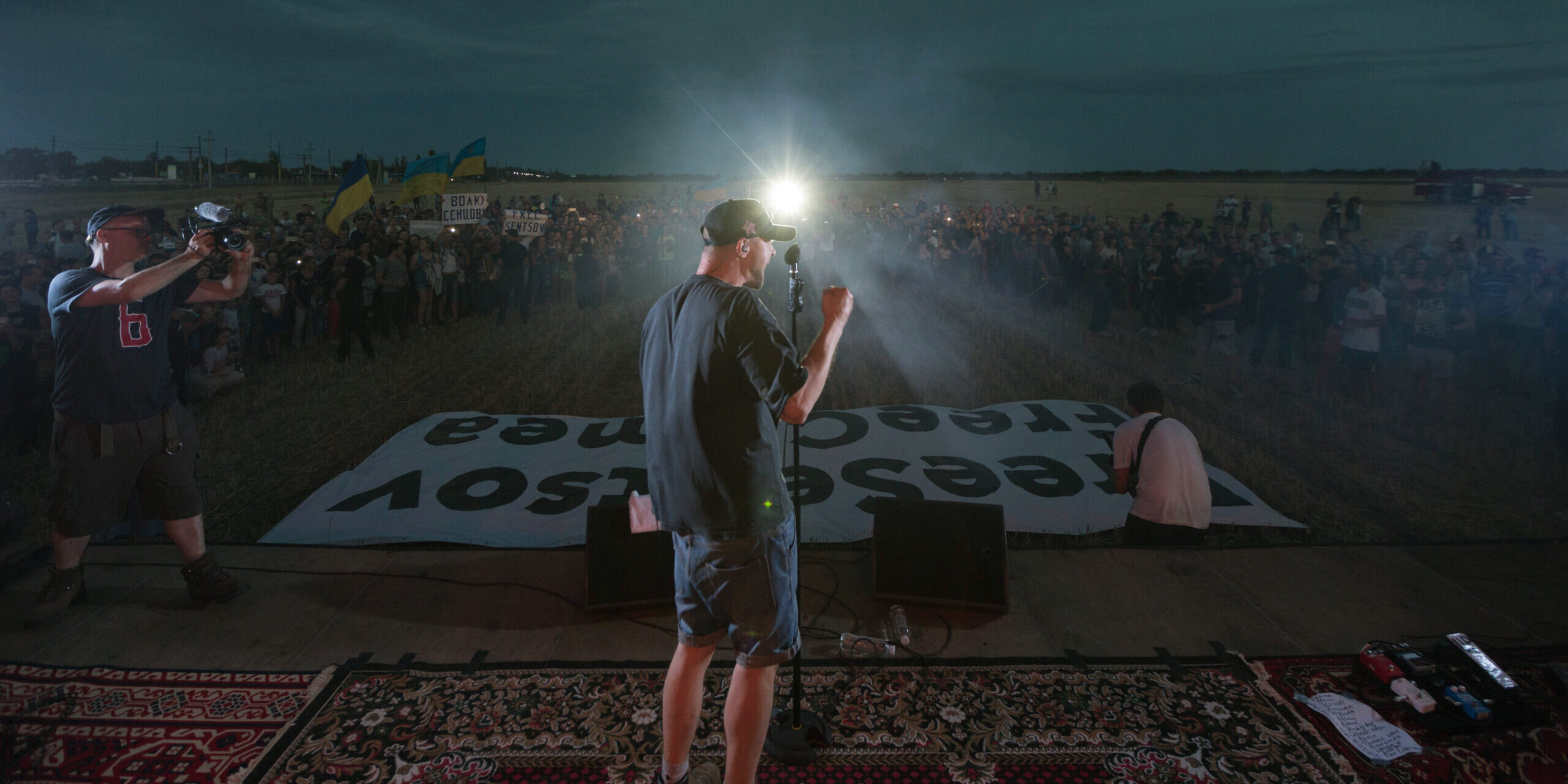 Alone is a new documentary film by Belarus Free Theatre charting the story of Ukrainian rock star Andriy Khlyvnyuk and his campaign to raise awareness about the plight of Ukrainian political prisoners. Natasha Tripney reports on a story of activism and political awakening.

When does an artist become an activist? What are the risks involved in doing so? As the lead singer of the Ukrainian band Boombox, Andriy Khlyvnyuk is one of the most prominent figures on the Ukrainian music scene. The band’s brand of hip-hip-infused rock has gained them a huge fanbase and he’s one of the most commercially successful artists in the country. But after Russia annexed Crimea in 2014 in the aftermath of the Ukrainian revolution, the band decided they could no longer play Russian shows.

This opened them up to attacks and accusations from the Russian media and, as a result, they lost a sizeable chunk of their Russian fanbase (it was particularly hard on the drummer who is an ethnic Russian), but they felt they had no choice but to do so. The war had left them feeling despair and emptiness. It was also impacting their creativity, they were unable to play music, unable to write, unable to go on as they had before. They couldn’t just pretend nothing had changed. They couldn’t do nothing.

The decision to stop playing Russian gigs was just the first step. Khlyvnyuk wanted – needed – to do more. He wanted to raise public awareness of the plight of Ukrainian political prisoners, in particular that of the filmmaker Oleg Sentsov, who was arrested for terrorism offences and sentenced to 20 years in prison, though Amnesty international judged the charges against him fraudulent.

“We are musicians, not activists,” says Khlyvnyuk near the beginning of the film, so he turned to Natalia Kaliada and Nicolai Khalezin, the co-artistic directors of Belarus Free Theatre, for help. They have years of experience of campaigning and making work underground. For over 10 years, they have been living in exile in London, having been forced out of their home country for resistance to Lukashenko’s dictatorship.

Khlyvnyuk’s growth into an activist is the subject of Alone, a film directed by Kaliada, Khalezin and the documentary filmmaker Andrew Smith. The film follows him to Minsk, where he meets members of the BFT company in the cramped garage that is their rehearsal space (people are wary of renting to them for obvious reasons). He watches a performance of The Master had a Talking Sparrow, a collage of stories of Belarussian people from the time of the Second World War. The performance takes place around a table with cast and audience  eating and drinking together. This is a device that recurs in their work. In 2019, Kaliada and Khalezin co-directed Counting Sheep, with Mark and Marichka Marczyk at the Vaults in London, an immersive show about Ukraine’s Maidan revolution, which also started with a meal – with shared vodka and borscht – before plunging its participants into a recreation of the protests. They also hosted Kitchen Revolution, a series of debates and provocations which took place over the dinner table. 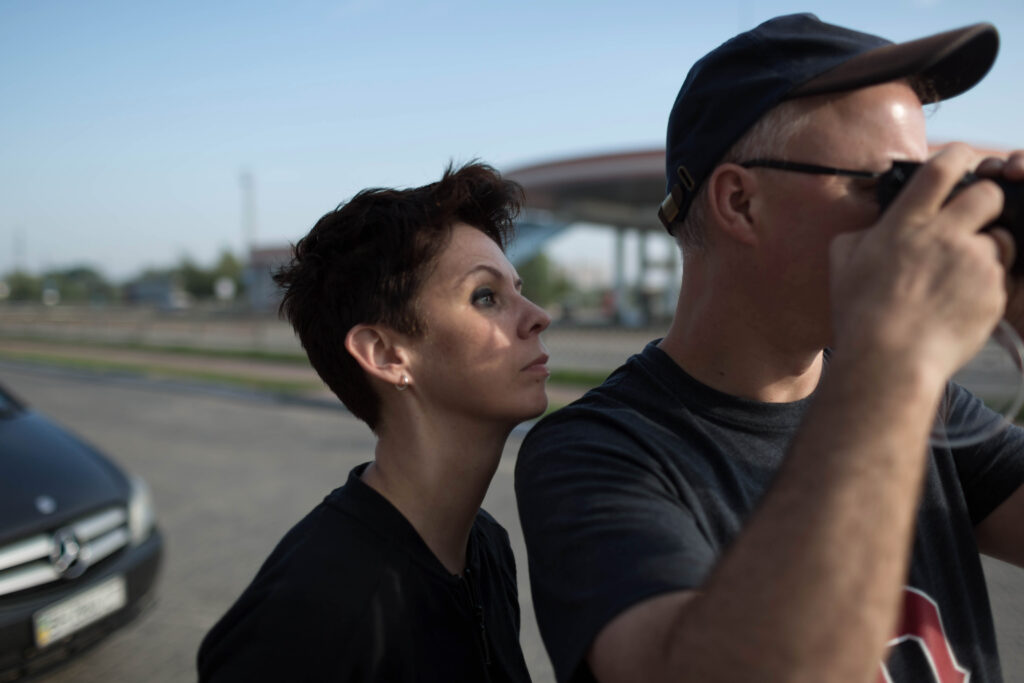 Natalia Kaliada behind the scenes on Alone. Photos: Justin Sutcliffe

The show in Minsk invited the audience to talk about their own experiences and actively challenges official narratives. Khlyvnyuk  is visibly struck by the subversive power of the piece, the risk of staging it at all. He realises that any protest of real consequence is going to involve an element of risk.

He ends up collaborating with BFT on their 2016 show Burning Doors, a piece about political prisoners, which starred Pussy Riot’s Maria Alyokhina, herself a political prison for two years in Russia. Khlyvnyuk wrote the music for the show; his song Alone, originally written as a love song, was transformed into a song of protest.

The film allows us a glimpse of BFT’s intensive rehearsal process. Burning Doors featured scenes designed to convey acts of torture, the beatings and the violence that is used to break people’s souls and bodies – heads are plunged into icy water, bodies are hurled across the stage or suspended from ropes. We get to appreciate the level of physical and mental commitment that goes not just into making a show like this, but being part of this company and living with the possibility of arrest, worse.

Alone is also a portrait of one man’s political awakening. Khlyvnyuk is often overcome by the strength of what he’s feeling. He’s a thoughtful and softly spoken man whose eyes sometimes fill with tears. One of the documentary’s greatest strengths is that we get to witness this internal pivot, almost as it happens, this realisation that he can no longer do nothing, that empathy is not enough – action is required. He’s determined to tell people about Oleg Sentsov’s plight, to ensure his predicament remains vivid in people’s minds. By this stage, Sentsov was on hunger strike. A key element of Belarus Free Theatre’s tireless campaigning is the recognition that is not enough to speak only once; you have to keep speaking out, you cannot allow people to forget; BFT have fought to keep Lukashenko’s oppressive regime and the plight of the people of Belarus on the media agenda, something that became all the more necessary after the waves of protests and subsequent brutal crackdown that followed the contested election of August 2020.

To raise awareness about Sentsov’s case, Khlyvnyuk gets the crowds at his concerts to chant his name. He dedicates the song Alone, his love-turned-protest song, to him – it becomes a song of solidarity.

But, still, it is not enough.

Khlyvnyuk decides he needs to do something bigger, much bigger, to make a more powerful gesture, one impossible to ignore. He decides to perform a concert near the Russian army military checkpoint at the illegal border to the annexed Crimea: a ‘concert for no one,’ a howl into the dark. It’s a bold and risky move; there is the possibility of landmines, of sparking an incident. His manager visibly panics when they discuss it. But Khlyvnyuk perseveres. He wants to turn a gig into a political gesture, blasting their music out across the empty grass towards the border. Because there were safety risks involved in doing this, they did not anticipate or intend for there to be an audience, but people got wind of what they were doing and showed up anyway – from both sides of the line. Some people brought their kids. Ukrainian flags were flown within sight of the checkpoint. A banner with Sentsov’s name on it took pride of place. 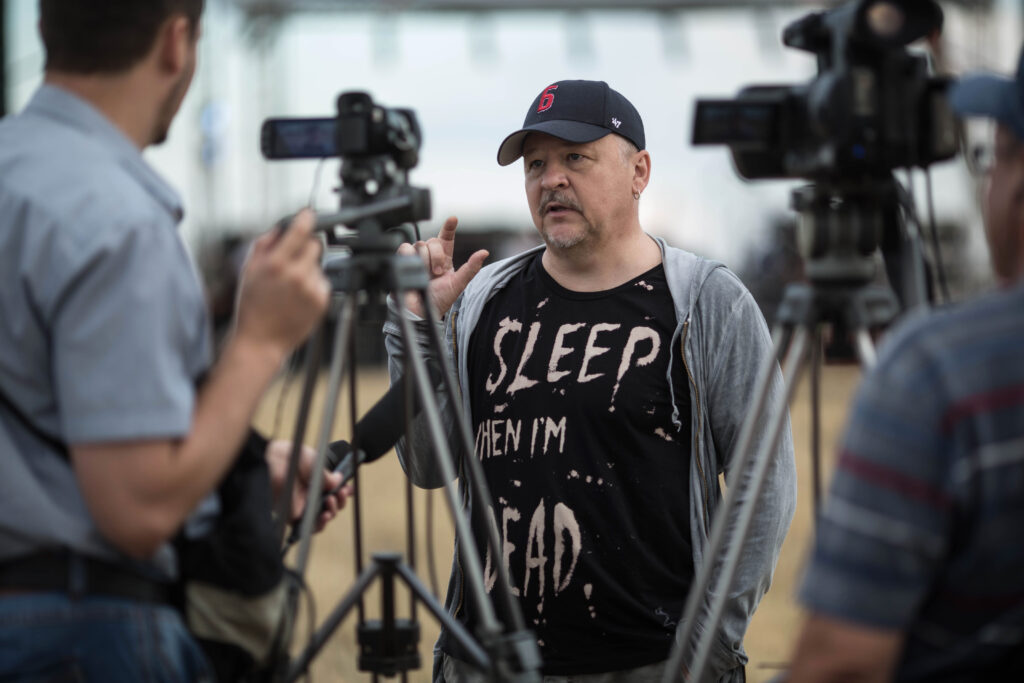 Nicolai Khalezin behind the scenes of Alone. Photos: Justin Sutcliffe

The documentary was screened in London on International Human Rights Day at a time when Russian troops are massing at the Ukrainian border once more causing international consternation and talk of war. It was also just days after it was announced that Belarus Free Theatre had taken the fairly momentous decision to move its entire ensemble out of the country, to uproot the whole 16-strong company and their families, because the situation in the country since the election had become increasingly unsafe for them.

In many countries, artists are obliged to walk a precarious line. There is power and responsibility that comes with having a fanbase and a voice that people listen to and yet there is a risk for those who speak out against oppressive regimes and injustice.

After enduring 145 days of hunger strike, Sentsov was finally released in 2019 and the two men eventually got to meet. Over the course of his campaign, Khlyvnyuk  had developed an intimacy with him because of his investment in his plight. When they finally meet, it’s very moving. Khlyvnyuk is awed and overjoyed to meet the man who he fought so hard for; his admiration and excitement is palpable. But though Sentsov may be free, his story is one among many, and there are many more in a similar position to him in Russia.

On one level the film shares similar thematic concerns with Complicte’s Can I Live?, a digital performance by Fehinti Balogun about the climate crisis and what it means to be an activist, as a young Black man, as an individual and as part of a wider movement. As much as Alone is about Khlyvnyuk ’s campaign, it’s about something larger. It’s about our interconnectedness. It captures the moment when you realise that silence is no longer something you can countenance in yourself, that as the Serbian activist, Srbijanka Turajlić in the similarly powerful documentary The Other Side of Everything, says: “passivity is impermissible.”