You are here:
kosovoserbiaswitzerland
Reviews 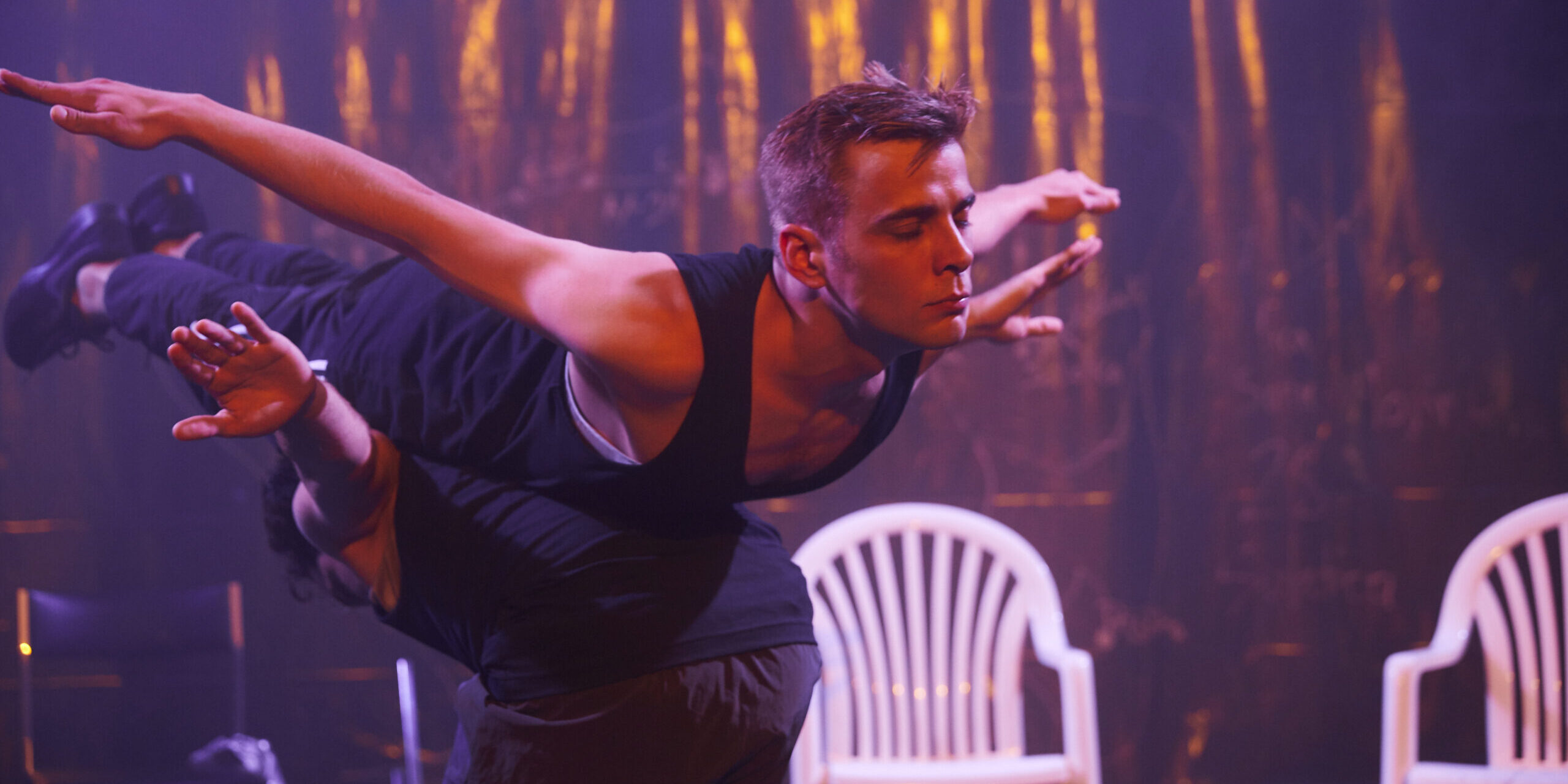 There are more people in the world who are either functionally bilingual or multilingual than those who are monolingual. While many English people go through life assuming the world will be translated for them, that there will always be someone nearby who speaks your language, it is more common for people to hop from tongue to tongue as the situation requires.

At the insistence of director Maike Lex there are no subtitles. How much of the play you understand will depend on your level of fluency and most people, I expect, will experience moments where they find themselves linguistically adrift.

A guest performance from the Schlachthaus Theater Bern at this year’s Kosovo Theatre Showcase. The text itself concerns Mila, a young woman who was born in Switzerland, but after receiving a parcel, sets off on a road trip across Europe, from Bern to Subotica, the city in northern Serbia with a large Hungarian population, to connect with her Balkan heritage. The cast – Patricija Bronić, Dávid Búbos, Boris Kučov, and Albulena Kryeziu – who all have roots in the ex-Yugoslav countries all play the character of Mila, donning matching blond wigs. They repeat lines of dialogue in their respective languages, before breaking out of this pattern. The various encounters that Mila has on her journey are relayed in different languages and also through movement sequences that echo Pina Bausch’s Café Muller, albeit with plastic garden chairs and Dávid Búbos wearing the familiar silky slip-dress.

On the bus Mila has intense conversations in German in which the words “Tito” and “antifaschismus” emerge from the wave of words. She gets her tenses tangled in Serbian, negotiating the complicated case system with hesitancy. Mila encounters a glamorous dancer and there is playfully-staged sequence in which many glasses of rakija are consumed in quick succession.

Eventually they encounter a roving DJ in a van (played by Milena Krstić, who also supplies live music throughout) and end up hitching a lift to Prishtina. At least I think this is what happened. I could be wrong. I lost track of the plot at times. I am not a German speaker and don’t know Hungarian, though I do speak some Serbian.

But this slipperiness feels like a key part of experiencing the piece. Not everything is intended to be intelligible to everyone watching. Some passages are wordless – the gentle duet between Dávid Búbos and Boris Kučov in which they support each other and balance on one another’s backs. Other scenes are very word-dense. The piece often pushes the audience into a place of non-understanding or half-understanding as it questions the concept of the “mother tongue,” and the overlap between language and identity. What if you don’t speak your mother’s tongue? What if you don’t share a language with your grandmother? What if you speak it, but not well enough to express yourself? What if you are limited by your language? What if you don’t have the words to say the things you want to say? Where do you locate yourself in the world? Do we present different facets of ourselves when we speak different languages? Do we amplify certain aspects of our characters? The Albanian-speaking performer, Albulena Kryeziu, stands apart, reading her lines, a necessity as she was a late replacement, but in some ways, this adds to the overall effect and amplifies the impact, creating another border between the performers. There languages are not always given equal space in the production. German speakers will probably come away understating most; at one point cardboard “subtitles” are brought out in Albanian; there appeared to be relatively less Hungarian spoken than the other languages. English is used relatively little (refreshingly or frustratingly depending on your perspective). It simultaneously feels as if there’s too much and not enough plot to sustain things, that the language aspect is the driver of the production.

A sheet of black plastic is affixed to the back wall on which the details of Mina’s journey are drawn, the different roads travelled and borders crossed. Coffee is brewed in a pot on stage at one point, but apart from a tray of rakija glasses, an array of chairs, a string of fairy lights and some neon green strip lighting, Romy Springsguth’s design is relatively minimal.

In an international festival context, steps are usually taken, either via subtitle of simultaneous translation, to ensure as many people present as possible are able to engage with the words being spoken on stage, so it’s rare to be in situations where this gesture is challenged or refused, where total comprehension is rejected. (Though, interestingly, another play in the showcase, John Cage’s Hamlet, directed by the late Bekim Lumi, was intended to be performed without subtitles, letting the physicality of the piece speak for itself). 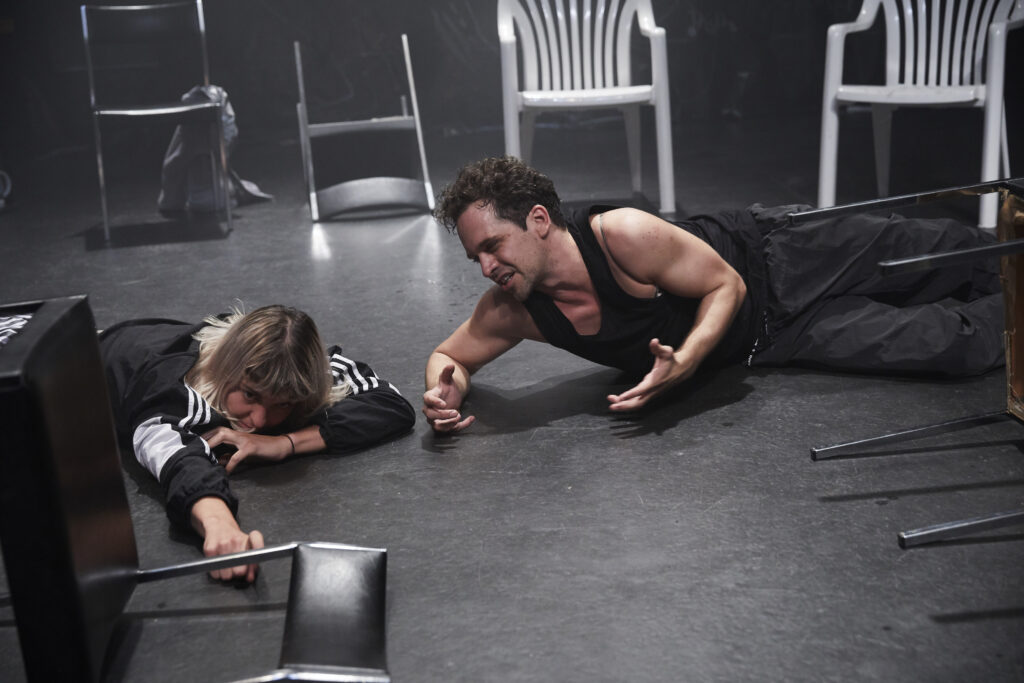 Lex’s production ends with a sequence in which the cast lay out the play’s thesis, that language does not define you, that seeing yourself through the lens of nation is unhelpful, whether or not you’re connected by blood or otherwise to what was once Yugoslavia. That identity is fluid and complex and it is possible to be from and of many places at once. This comes close to feeling didactic, telling the audience what to think about a piece that has thus far resisted spelling out its message, but there’s a heartfelt quality to the way

this last scene is delivered that softens this didacticism. It feels genuine and warm. In this one gesture, the fragmented parts of the play – and the person – come together, joining their voices.