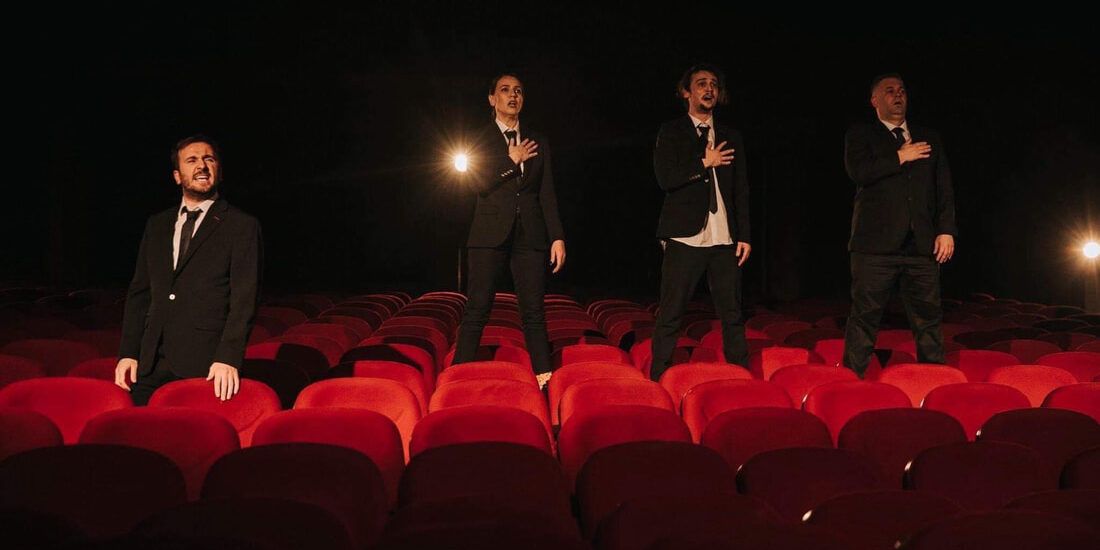 As the lights dim, the four actors start moving through the theatre. It looks as if they are swimming in the sea. The audience sit on benches on the stage, looking out at the rows of seats. The lights fall on these seats, creating the illusion of waves.

The actors appear as if they have emerged from the sea. They are all dressed alike (the costume design is by Mentor Berisa) to maintain their neutrality; they are citizens without names.

We are in Roccalumera, a small town in the south of Italy, where no refugees have ever arrived. This has caused a widespread depression in the city. Dreams of boats being emptied in the city’s harbour sweeten citizens’ sleep, but they are only dreams. All the money from the European Union is going to Lampedusa and other Italian cities where they do have refugees, “the bloody bastards” says one of the characters. Even the cat, Sonno, the only cat in town, decides to leave forever because of this intolerable situation.

Then someone appears among the ‘sea-seats’ and slowly, his body passing from row to row; he comes to rest at our feet, flowing to the shore. The person is dead; he is also not a refugee. It’s the body of an Italian. But the people of Roccalumera are good capitalists, and if life gives them lemons, they make lemonade and sell it, so they decide to cut off the dead body’s penis and put him in a niqab, turning him into Roccalumera’s first refugee. “Wherever there is one refugee there are many.” Scene follows scene as there are press conferences and the much-anticipated funding arrives from the EU. Life gets better in the town, even the cat, Sonno, returns.

Jeton Neziraj’s play is both genuine and artistically appealing. He re-creates a small fishing community between the seats of the theatre and is able to depict the passage of time, piecing together brief scenes where little happens – just the fall of a handkerchief from a balcony, or even, sometimes, nothing at all. We all have days like that.

The decision by director Blerta Neziraj to seat the audience on stage is a brilliant one; Yann Perregaux’s lighting design is also inspired. Despite the fact that the movement between the rows of seats does not appear comfortable, the actors do an impressive job. Gani Rahmani is able to quickly and convincingly convert himself into several roles (including Sonno the cat), and Tringa Hasani fits into all her roles well.

But the happiness of the people of Roccaslumera does not last long; since the dead body was an Italian, someone comes from the Italian mafia. And so he begins to murder the citizens while seeking among them the killer of his brother Giuseppe (the dead body). Later, he discovers that Giuseppe is still alive and that everything was a misunderstanding, so he returns to his hometown leaving behind, as a way to apologize, his torture tools. “Make a museum,” he advises. As if saying: “do not forget.”

The Roccalumera cat returns again. This cat reminded me of all the Albanians I know, always trying to escape to the fabled West, but always returning back, if not physically, in some other way.

Then a ship carrying real refugees approaches the shores of Roccalumera, but after everything the citizens lock the port and turn off the lights. They remain silent so as not to be heard by the refugees. We on stage are also silent.

This is when Jeton Neziraj decides to strike. He places one of the actors in the role of God, speaking to us. Asking us what would we do if a van with an African family of 15 members standing in front of the theater now, which of us would go and pick them up and shelter them in our house? Thus the sea disappears and we, the audience, return to Gjilan, and from Gjilan, we go deep inside ourselves.

​In the last scene an actor dressed as Superman enters the stage holding a large frame covered in black fabric. He tells the story of a little boy, Aylan, who with his father had taken the sea route to Europe, to escape the war in Syria. Superman was Aylan’s favourite toy, so he was not afraid, because his hero could save everyone.

The fabric is removed to reveal the real photo of little Aylan, that the waves had washed ashore. Apparently, the sea required a sacrifice. The revelation of the photo in this way stunned the audience; some burst into tears.

Superman, who saves everyone, could not save Aylan who never arrived in the promised land, in the free Europe where life would resume.

Pablo Picasso says that the purpose of art is to clean the dust of everyday life from our souls. This play shook the dust from our shoulders. The dust that makes us forget the human inside us. It was like a strike for the audience: remember, it said, remember…

Superman didn’t save Aylan, but can art do something? Can art save us all?

Translated into English by: Alexandra Channer