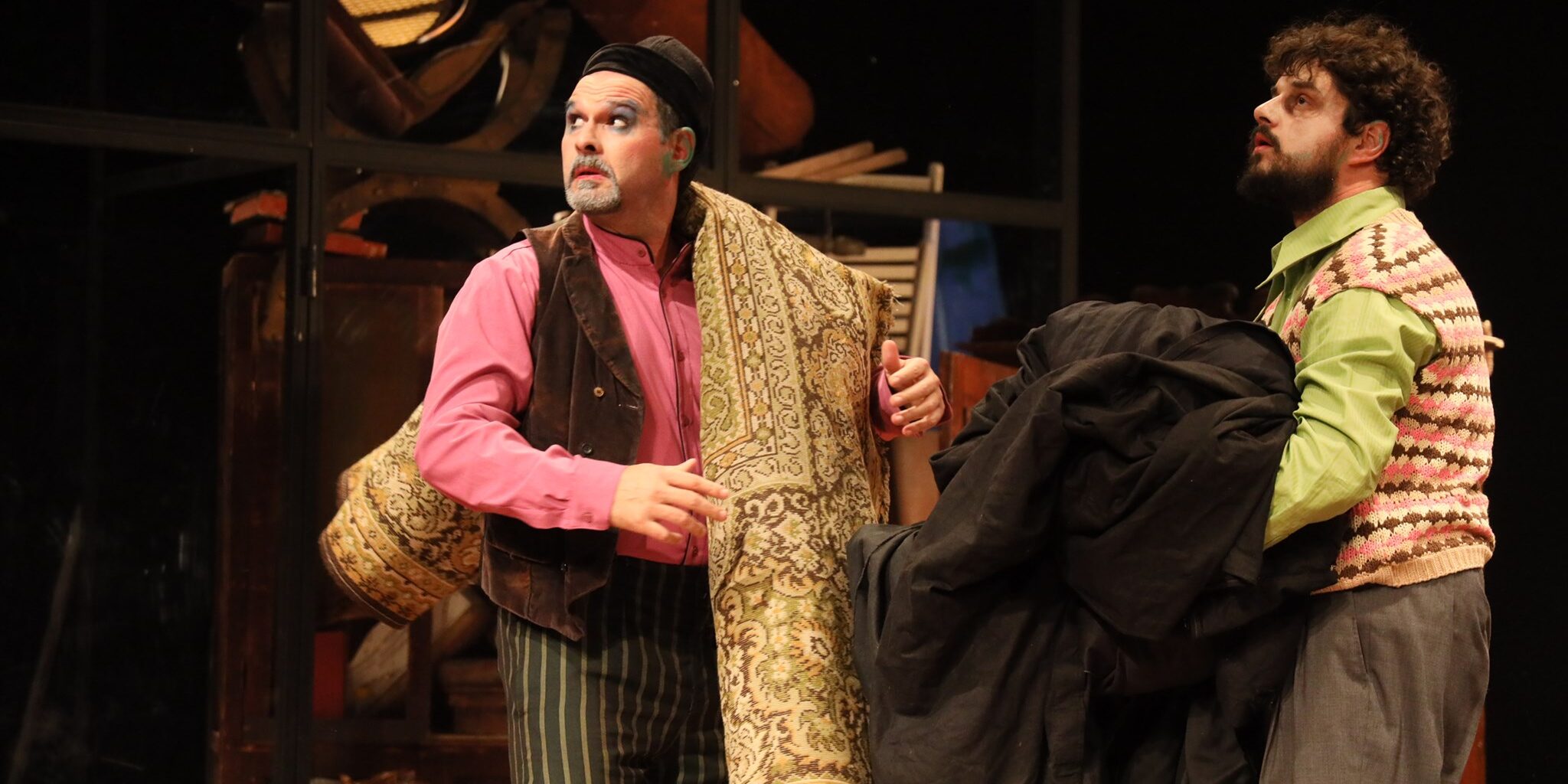 It is difficult to predict how Branislav Nusic, the famous Serbian comedian, planned to finish his comedy Vlast (Authority). The two existing acts, written before death interrupted him in 1938. have verbal wit, but it is hard to tell in which direction the plot is moving.

This was once pointed out by our famous theatrologist Slobodan Selenić when he emphasizes that Power is made up of independent satirical episodes, none of which has enough cohesive power to lead the action in a certain direction. Completing Nusic’s unfinished comedy is not an easy task. There have been various attempts. Some were well-received, others less successful in their  imitation of Nusic’s comedic style.

In order to avoid the danger of such a failure, Milan Nešković, the director, and the playwright Tijana Grumić have chosen to finish the play with a collage technique. They borrow characters and scenes from Nusic’s other plays. We can recognize characters and scenes from comedies such as Narodni poslanik (A Member of the Parliament), Sumnjivo lice (A Suspicious Person) and Gospođa ministarka (The Cabinet Minister’s Wife). They mostly borrow from the comedy Pokojnik (The Deceased), even the basic plot. The character of the newly appointed Minister Svetozar from the play Vlast and the character of Milan Novaković from the play Pokojnik become one and the same person and their joint misdeeds become part of that one hybrid character.

In the subtitle, the authors called this eclectic procedure of merging Nušić’s numerous plays into one whole: ‘the collected misdeeds’. However, instead of satirically mocking human flaws, and above all, the desire for power, what we get is a time-stretched mishmash of plots and subplots, a series of unrelated scenes and episodes.

The chaotic structure of this performance is further illustrated by the production design. On the right side of the stage there is a huge wall made of transparent material. Just as the text is full of scenes that lead nowhere, so too is the space filled with clutter: cabinets, tables, chairs, baskets, lamps, a toilet bowl and so on. Apart from the fact that sometimes characters sit on the toilet bowl and for some reason take out empty bottles from it, none of these things have any special purpose.

Other elements of performance also feel incomplete and unexplained. Some characters are given props that they carry with them, but they don’t do anything with them: Miloje has an electric drill, Arsa has a pocket watch, Dobrosav has a children’s rattle. The characters wear thick layers of makeup and colorful clothes. Such a circus-like aesthetic complements the mixture of acting expressions, sometimes vaudeville-style, sometimes realistic, which makes the performance even more confusing. Each of the ensemble of six performers has the task of playing multiple roles and they are at least successful in that.

The establishment of an endless catalogue of scenes and characters from Nusic’s comedies creates allusions to contemporary political circumstances in Serbia. There are politicians who cannot attest to the origin of their property. Public officials who do not take into account the needs of citizens. The list is long.

But the mockery is not performed as a meaningful critique of the regime, but as an expression of the cynicism of the authors who deal with a much wider range of problems.

There is a scene that is probably a reworking of a motif from the play Narodni poslanik. The opposition politician comes to see government official Miloje (Nikola Rakočević) to complain about the shameless rhetoric used by the pro-regime media to discredit its political enemies. The authors rightly wanted to point out the shortcomings and ineffectual nature of opposition politicians and this was achieved by the character played by Ivan Bosiljčić who speaks in a weeping voice, almost crying, complaining that his wife left him because of the media and threatening to kill himself. He is incapable even in this, because he can’t even hold a gun properly. The representative of the government, Miloje, feels sorry for him and tries to comfort him. The opposition politician tries to kiss Miloje in the mouth in response, but without success. Miloje throws him out in disgust. Thus the characteristics of  weakness, fragility, and helplessness are coupled with hidden homosexuality. In trying to discredit the opposition by using prejudice, the authors resort to homophobia.

Another scene highlights this performance’s reactionary, narrow-minded and discriminatory nature. What is a benign scene in Nusic’s original becomes an instrument for dealing with the MeToo movement. An abused woman Nina (Vanja Ejdus) comes to the office of the newly appointed minister and begs him to move her violent husband from his job in Belgrade somewhere else. She has turned to the police and institutions and begged for help, but no one has listened to her cries. She comes to the minister to ask him in every possible way to remove the abuser from her life. But the minister is not really a minister, rather his cousin Arsa (Aleksandar Srećković).

Nešković caricatures the unhappy woman as an intrusive and aggressive person: sometimes weeping, sometimes unbridled, sometimes broken, sometimes intrusive. She is a victim of violence who offers her sexual services to the minister in order to make him help her. Without his consent she starts masturbating him, and after that she pushes his face into her bare breasts. By putting her in an impossible situation the director made her a sexual predator who eventualy makes the poor man cry. It feels as if the production is saying that women cannot be victims of sexual violence because they not only never refuse sex, but also use it as a means to achieve their own goals.

In Nušić’s text, the woman only says that her husband is standing over her head, which might mean he is just annoying her, but in this performance, she points to the bruise inflicted on her by husband. That could possibly be a make-up which she put on to get rid of her husband, which would seem to imply that women pretend to be victims of violence in order to realize their hidden goals. This  kind of thinking is damaging to all women who are really victims of violence.

Whatever the case, this performance devalues ​​any attempt made by a victim of violence to report her case. It produces a narrative that discourages victims of violence from seeking help and justice by confronting them with mistrust, suspicion, and ridicule when they need protection.

The other female characters in the play are also unnecessarily sexualized. The costume of Mara (Vanja Ejdus) is such that it makes her appear as if she has extraordinarily large breasts. There is also a woman who shaves her legs in the background at one time,  a scene that Nešković included in one of his previous performances, 2017’s Switzerland, in which a semi-naked female character serves as a decoration throughout the performance.

There are no male characters who are sexually objectified in this way. And this sexual objectification is not problematized. The power dynamics are not analyzed. The inequalities are not highlighted. The patriarchal subordination is not exposed. These are things that Nešković does very rarely in his work. He often hypersexualizes women and makes them prostitutes or rape victims (as is the case in the performances Bela kafa from 2015 and Mrešćenje šarana from 2016) and even shows a man washing a woman’s genitals (Nečista krv from 2019). There is no sense of a critical attitude towards such things. He stages such scenes incidentally, without commentary, just as he does in Vlast. For this director, violence against women is a stylistic device, a means of developing a dynamic scene, or occasionally, a source of ridicule or excitement. It is telling that this misogyny has not stopped Serbian institutions from programming his work.