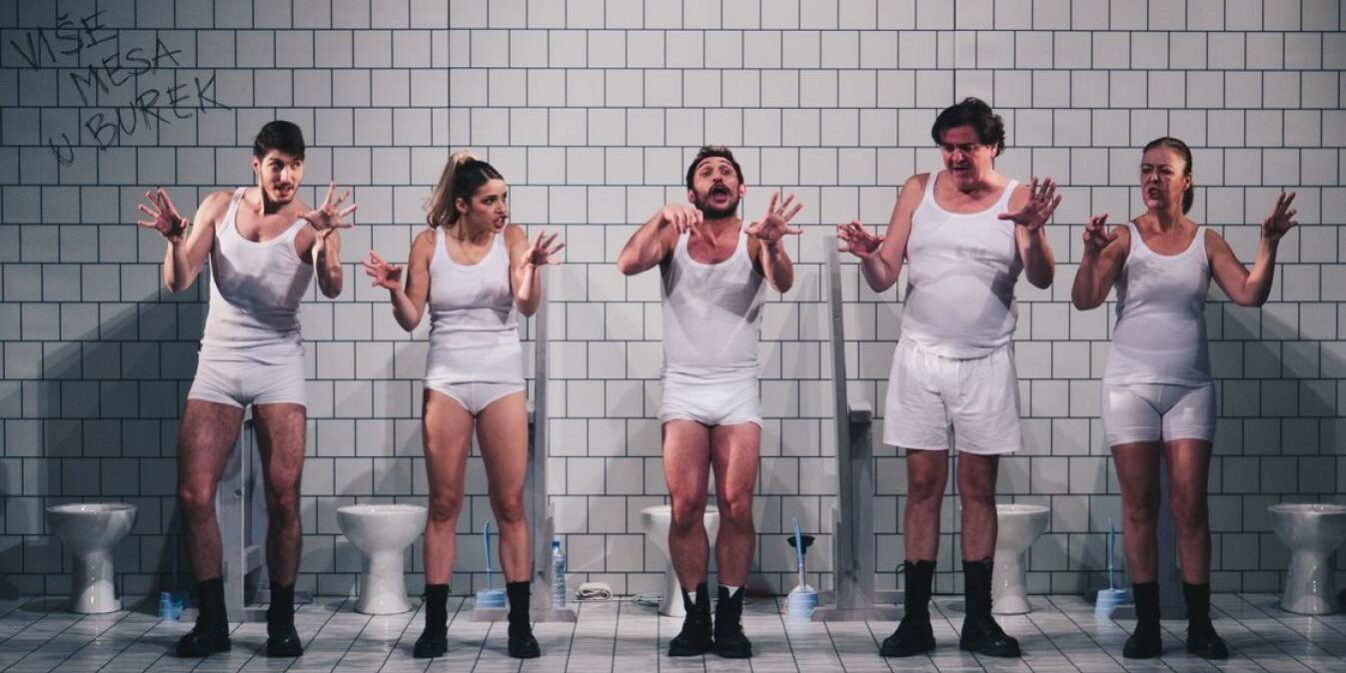 Given the fiercely provocative and politically engaged opus of the director Andraš Urban, it seems at first glance like a perfect match that he decided to direct Alfred Jarry’s Ubu Roi at the Sombor National Theatre. First performed in Paris in 1896, Jarry’s play anticipated the theatre of the absurd by more than 50 years.

Urban’s performances usually spotlight the absurdity of our contemporary political life, afflicted by nationalism, misogyny and blatant corruption. Jarry’s Ubu Roi also satirizes in a pseudo-Shakespearean way authoritarian state leaders that are so present today, both in South East Europe and beyond. The play also has a rich layer of irony and self-parody,  the deconstruction of classical theatre structures, which is a thread that also consistently runs through Urban’s work.

In keeping with this manner of parody and provocation, Ibi the Great (renamed for this adaptation) doesn’t start with a scene between Ibi and Mother Ibi in which they frenetically swear and scheme to murder and overthrow of King Wenceslas (that comes later). Instead, the actor Nikola Knežević insults the audience, telling them that they don’t know anything about contemporary theatre, so he’s there to explain things to them. He throws around facts about Jarry’s play and underlines that it has nothing to do with us and our society. That play is set in Poland, we’re in Serbia. Poles are Catholics, we are Orthodox. They have a population of 38 million people, we have seven million (wait, is that with or without Kosovo?) They banned abortion, we haven’t yet banned abortion. Shortly after this, Nemanja Bakić who plays Ibi enters with a soliloquy on how he adores Sombor’s audience, only for his claims to be subverted by the other actors who force him to admit that he uses the same cheap phrases for the audience in Belgrade.

This meta-performance represents roughly a third of Ibi the Great. The rest of the show is an actual adaptation of Jarry’s story that clearly – no matter what you are told at the beginning – represents a metaphor of our regressive, authoritarian society. And if you don’t realize this obvious metaphor… well, then you really don’t know anything about contemporary theatre.

The grotesque as a means of social critique is so vivid (and, yes, sometimes disgusting) that Jarry is probably turning in his grave because he didn’t come up with these ideas. Ibi pours a torrent of shit from a toilet seat onto  the other characters’ plates, which they are obliged to voraciously eat because this is a royal feast (the set design by Urban is a bathroom with a row of toilet seats and white tiles). Later there are numerous scenes where Bakić as Ibi energetically sings about his glory and his intention to rob the state and destroy every element of a democratic society, from the judiciary to a stable economy to peace. The background music (by Irena Popović Dragović) is folk, played by Strahinja Rašić on the accordion, because Ibi is a “people’s man”. A scene where Ibi is surrounded by his hanged victims (“played” by puppets) with whom he enacts a council meeting, animating the corpses so they can praise him, is particularly evocative.

One might ask how are the meta-performative elements of the staging connected to this grim, dark burlesque of shittiness, cynicism and violence? There might be a distant connection in which the violence portrayed in the Ibi story resonates with the theatre artists’ treatment of the audience or the self-ironising comments about the director’s mistreatment of actors. But, in truth, these two parts feel like two parallel performances that are sometimes unjustifiably brought together.

When Urban directed Wanton Lady’s Knights, he dedicated the whole show in a way that highlighted the clash between classical and contemporary approaches to theatre and the (mis)treatment of actors and the audience. But with Ibi the Great, it feels like he didn’t say everything he intended to say in Wanton Lady’s Knights, so he just added these elements to this show too.

Some of the self-ironising material can also feel counterproductive or defensive. There’s a moment when Danica Grubački, who plays Mother Ibi as well as several other roles, explains from the perspective of her character that she’s forced to be naked and sexualized during the performance, but then the moment quickly passes, the show move on to another topic. It seems as if the director is trying to inoculate himself from any potential criticism that he’s objectifying women (did you notice how Urban sexualizes actresses? – oh, he mentioned that himself in the performance, so that’s OK!)

A lot of talent has gone into the creation this performance, the actors in particular skilfully switch between different roles. Most notably, Bakić gives his all to convincingly play the berserk but charismatic Ibi, he gives so much that he could afford to dial down his performance on future occasions.

But the show as a whole oscillates between two insufficiently connected parts; the grotesque elements make for a show that sometimes feels darkly funny and provocative, but on other occasions feels like a scene from farcical reality TV. Urban’s production of Hasan-Aga’s Wife where he made a punk heroine of a female character stuck in an ultra-conservative environment, was incredibly accomplished. In The Patriots he made a clever actualization of the 19th-century nationalists fighting against an empire into a story of modern-day Serbian nationalism. But in Ibi the Great he just showed us what we already knew: that we live in a dark, corrupt, anti-utopian society. He just made the shit look deeper.