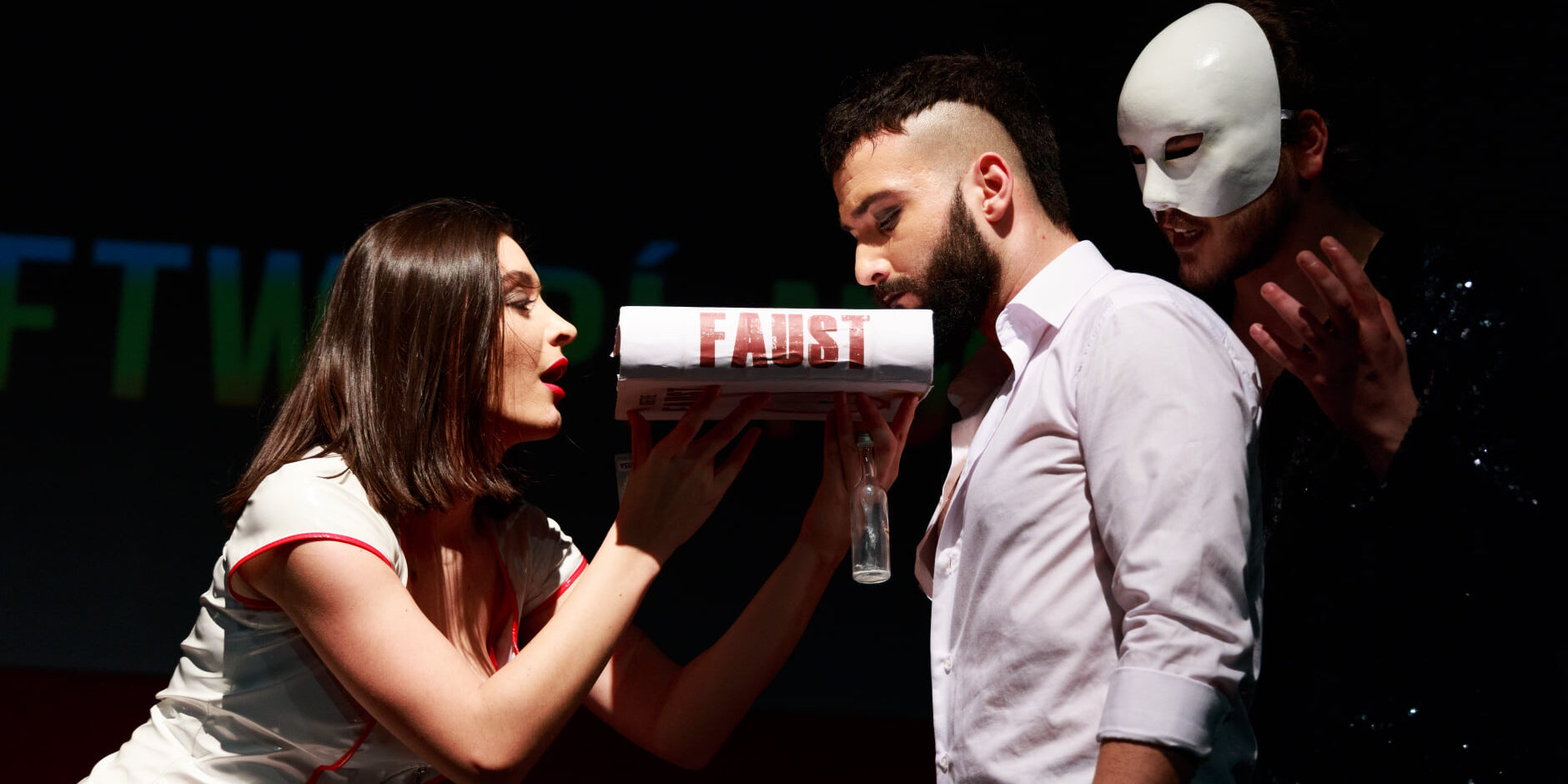 Goethe demands that the show be cancelled. The director fucks a book on stage. The actors run around as if they’re doing a marathon. There are Nazis, Communists, Albanians, Japanese, Bosnians, Australians, Kosovars, Americans, and possibly even, Martians – but, above all, there are artists.

The play, Hello, I am Mephisto, produced by Ema Andrea, is an inter-Balkan production with actors from Albania and Kosovo, a director, Dino Mustafic, from Bosnia, a choreographer, Gjergj Prevazi, from Albania and a composer, Irena Popovic, from Serbia.

Mustafic’s work is not unknown in Tirana; his show Equus, which premiered four years ago, was a huge success and the first to present a naked performer in a National Theatre production.

Even before the lights in the hall are turned off, Goethe (played by Ilire Vinca) appears on stage with a book in hand, demanding that the play be cancelled because it doesn’t stick to the book. The book is then picked up by the ‘Director’ (played by Matia Llupa), who enters on stage as Goethe’s polar opposite; dancing to the beat of electronic music, wearing high heels, sunglasses, and bright colours. The lights dim as the director fucks Goethe’s book in various positions. The relationship with the book becomes increasingly physical and erotic, and after climax, the book appears to have accomplished its goal. After this scene, there’s really not much point in attempting to stick to Goethe’s text.

It proved too much for some Albanian spectators, accustomed to classicism; a few left their seats and made their exits.

Klaus Mann, Johann Wolfgang von Goethe, Jeton Neziraj, Musine Kokalari, Paul Eluard, Goran Simic, and Klaudia Piroli contributed to the play’s text. Only Jeton Neziraj and Klaudia Piroli, however, are aware of this fact. On stage, the passages from the various authors merge beautifully, creating a sense of timelessness and placelessness. This creates a seamless and constant tone throughout the piece.

It sometimes feels as if the actors have written the script themselves as they tell us about the obstacles they’ve faced during their careers. This is illustrated by their running around the stage as if they were competing in an Olympic event. Everyone tries to push to the front, while someone occasionally breaks away from this vicious circle to tell their personal story: how an older colleague treated him like a student rather than a peer,  or how the director demanded sexual favours, or how someone was passed over for a role because he spoke in dialect, or how someone else was not even paid for their work… 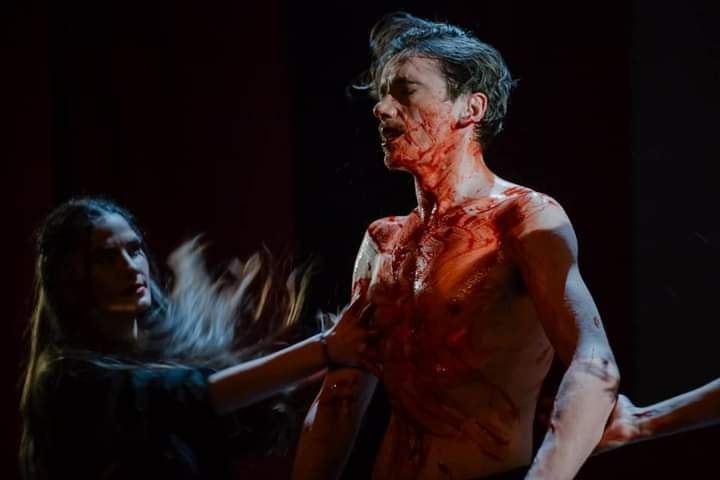 There is a single sofa on stage, and the actors move on and off it, allowing the audience to focus on the movement of the actors, which takes different forms in the different chapters of the play. Gjergj Prevazi’s choreography is outstanding, evoking virtuosity and vibrancy.

The character of Mephistopheles is crucial to the story. He is always connected to the time and space in which events occur, and as a result, he takes on different forms. Mephistopheles’ pact with God is simple. He’ll play his game with Faust in the hopes of luring him into wickedness. In this way, the narrative appears to be straightforward and clear. But who is Faustus? Who is Mephistopheles?

Until a few years ago, stray dogs in Tirana were taken to the veterinary institute and neutered, after which they were released back into their natural environment. While this method was not expensive; dogs were neutered by teachers and students for educational purposes, it appears to have been troublesome for the municipality of Tirana, which found an easier solution: poisoning stray dogs.

As the dying shriek of a poisoned dog reverberates through the theatre, piercing our ears with its volume, the actor Rafael Hoxhaj, in an extraordinary interpretation, conveys the anguish suffered by the dog until its end, while the other actors stain him with blood.

Mephisto now wears the face of those elected by the people in a society where compassion for animals is non-existent, and Gandhi’s quote “The greatness of a nation and its moral progress can be judged by the way its animals are treated” appears in the background.

Klaus Mann takes us to Nazi Germany, where the Mephistophelian pact is offered to the artist. As a result, he adopts a new style of work known as heroic realism, which helps him advance in his career. His compromise is his Mephistopheles. The shadows of the imprisoned Jews and the crematoria of the Nazi camps are veiled behind the simplicity of this trade. 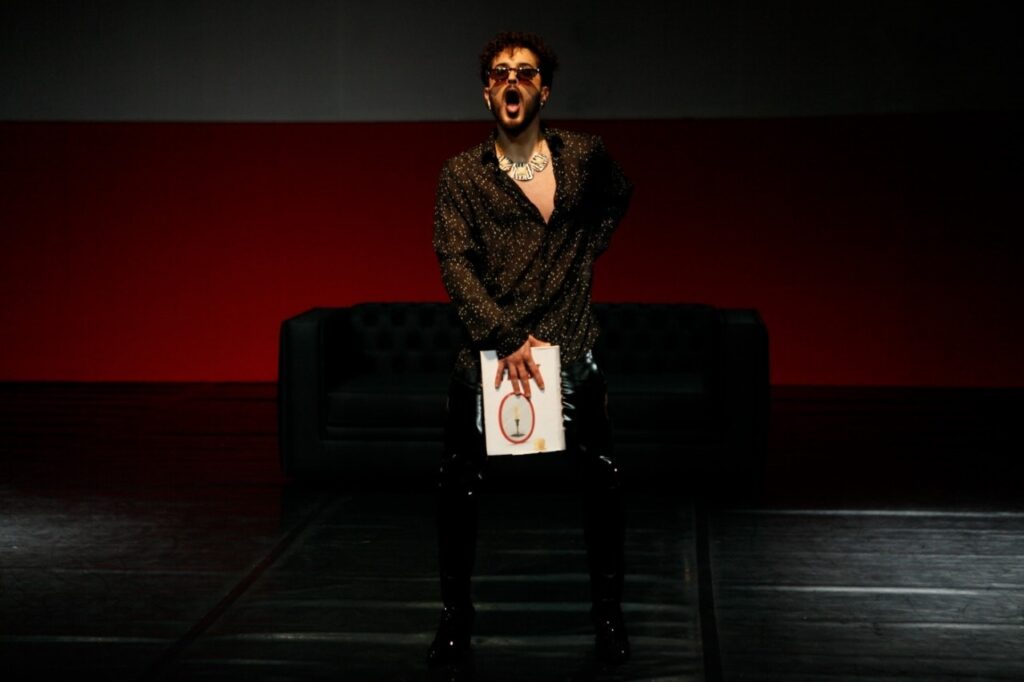 Musine Kokalari is Albania’s first female poet and political dissident. She was one of the founding members of the Social Democratic Party in Tirana in 1943, but when communists took power two years later, she was sentenced to 25 years in prison (of which she served 16 years), as well as perpetual persecution. She spent the rest of her life in a small city in northern Albania, working as a street cleaner in extreme poverty. She was diagnosed with breast cancer but was refused treatment. She died alone in the hospital and was buried at the municipal cemetery.

After reading Musine Kokalari’s poem “Around the plate…”, one of the actresses dressed in red and wearing Mephistopheles’ mask sits in the middle of the stage and eats elegantly while sipping from a glass of wine. Behind her, the others suffocate with a plastic bag on their heads, falling dead one after the other, while  two soldiers – who also wear Mephistopheles’ mask – drag them away, removing the dead bodies.

The callousness, the dehumanization, shown in this scene reminds us that dictatorships bring out the worst in people, and that we are virtually all guilty when we choose to ignore the tragedy unfolding right in front of our eyes.

In front of the microphone, the two actors, Ilire Vinca and Ema Andrea, seated on the sofa in the center of the stage, present the testimony of a woman in the communist camps.

On the road to camp, a mother is raped next to her sleeping children. She is trying not to wake the children by staying quiet; they should not see. The boy dies in her arms the next morning at the camp, and she hoped that he did not witness that scene…

“I took of my clothes” is repeated several times, as if to indicate that this is not a mono-history, but something that occurred multiple times in the infamous camps of the Mephistophelian dictatorships.

Outside of authoritarian systems, Mephistopheles can be presented to us in a more personal and intimate way. A mother who uses force to feed her son, as well as giving him suffocating advice, becomes a Medea. The inner cage in which we find ourselves becomes visible as the surrounding bars are painted in familial, personal colours.

One of the most important themes in this performance is the role of art and artists in society. What role should the artist play?

Mephisto can be found anywhere – even, perhaps especially, within us. In front of a mirror, the actors are ruthless with themselves. “Failed acting and yet the show a great success.” They all repeat the same phrase and then spit at themselves in the mirror. But, after all this boredom, sadness, unfulfillment, despair, and self-criticism, delivered in grey voices, the actress Ema Andrea enters the stage (possibly as the theatre cleaner) and begins to cleanse the bitterness reflected in the mirror while reciting Liberty by Paul Éluard in the original language. The recitation of the poem sounds like a prayer, with the phrase “j’écris ton nom – I write your name” repeated at the end of each stanza. A poem that reminds you that the mission of art remains unchanged across all systems and dictatorships, to protect freedom and dedicate yourself to it.

In the introduction to Kazantzakis’s autobiographical book, Letter El Greco, his wife, who wrote the introduction, writes: Kazantzakis asked God for ten years as a deadline to complete his work. And then, she quotes Kazantzakis: “I ask God to give me another ten years, to do my job, to say what I have to say and to empty myself. Let death come, and find only a sack of bones to take.” As if they are fulfilling this request, the actors ask to donate their organs and blood to true artists so that they can live a little longer and donate a little more art.

In a performance that is physically demanding, the cast manage to transmit full and true emotion to the audience. A new cast of actors inspires and invites us to identify Mephistopheles among us, and above all, within us.

It is call to get a little closer to our personal and social freedom, to uplift ourselves, as individuals and in society. “I’m just an actress”, says Ema Andrea at the end of the show, as if to say: “This is what I can do, now it’s up to you to do your part.”