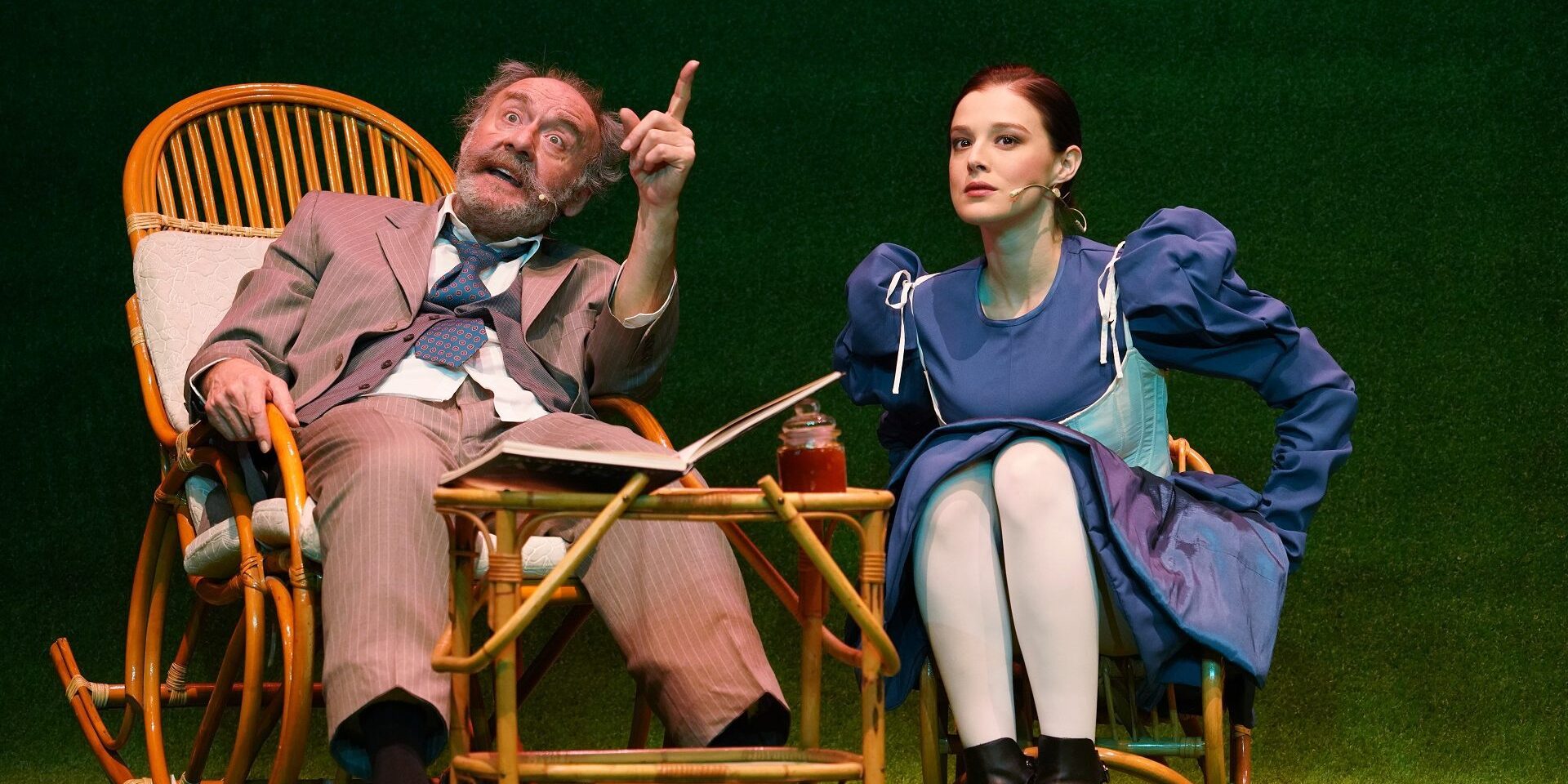 Strongly influenced by the work of Lewis Carroll, Alice in Fearland (Alisa u Zelmji Strahovi), by the Slovenian writer Eva Mahkovic, sees Alice, whose adventures in Wonderland are very well known, grow up to be a woman of thirty-five – and the world of wonder transformed into a world of fear.

The role of Alice is played by Milena Radulović, one of the main figures in the MeToo movement in Serbia. Since she is not part of the JDP’s ensemble, it might be assumed that this casting hinted at a courageous decision on the part of the institution to tackle the topic of violence against women in Serbian society.

At the beginning of the novel, Carroll’s heroine possesses the manners, self-confidence and way of reasoning of the British upper classes. Brought up in Victorian society, she is faced with a world of nonsense, paradoxes and aporias. Through meeting with the inhabitants of Wonderland, her identity is called into question as well as the values ​​with which she was raised.

Unlike Carroll’s Alice, who is going through a transformation from a self-confident rich girl to an insecure, questioning, and somewhat self-conscious individual, the Alice of Eva Mahkovic’s adaptation is confused and undefined from the beginning, and seems to remain so until the end.

The fears stem from Alice’s doubts that she will be able to fulfil the demands of the patriarchy and capitalism that dominate the modern world: you always have to be happy no matter what; do as many things as you can in order to make your CV long and diverse; by the time you are in your mid-thirties you have to be in a happy marriage and expecting a child; if you are not in a relationship you should work on those Tinder dates; do not eat too much; be aware of sexually transmitted diseases; do the team building exercises; stay positive; be friendly with your boss and colleagues, but turn against your friend and colleague if your boss requires it; give all your love to an uncontrollable child. Hurry up. Stay positive. Be yourself. And so on.

The characters from Carroll’s novel have become Alice’s acquaintances. The White Rabbit is Alice’s disinterested psychiatrist. The Caterpillar is Alice’s friend who broke their vow never to have children. Through conversations with them and other characters, the problems and fears are sorted out sporadically, arbitrarily, without any order, and it seems that there are more than seven of them and that some of them are smaller and others are more significant.

There are scenes that have the potential to provide a serious critique of capitalist ideology. For example, the Queen of Hearts in Mahkovic’s text is Alice’s cruel Boss. She offers Alice a promotion, only if she fires her colleague. She had previously offered the same choice to that colleague. The queen then orders them to cut off each other’s heads, while constantly saying: we are having such a good time. In that most successful scene, the employees are forced to fulfil the interests of their employers and perform their duties in order to keep their jobs. 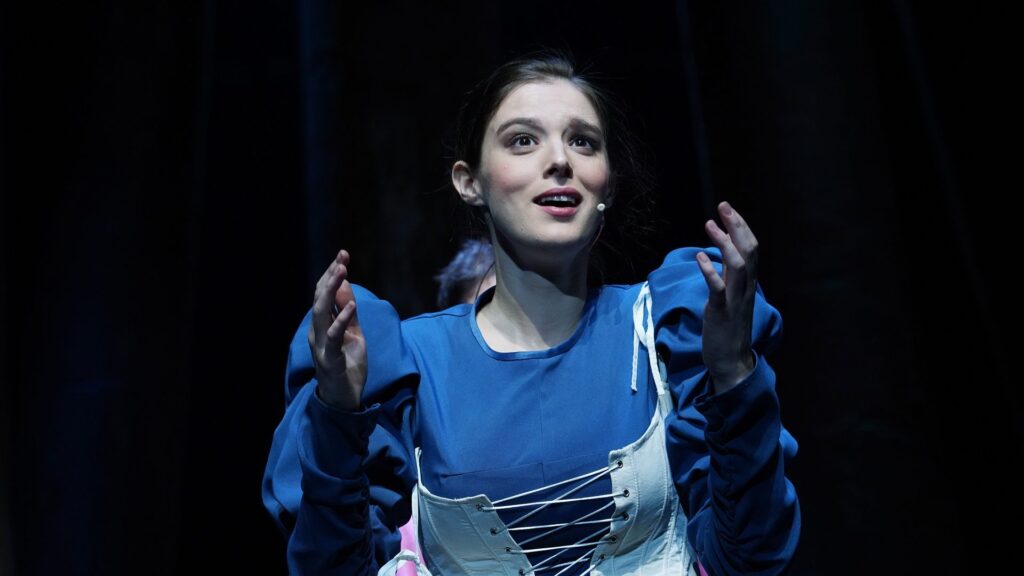 It’s disappointing that the topic of violence against women is not discussed as one of those great fears, neither in the play nor in the performance. Alice is afraid that her biological clock is ticking, that she is not sure if she wants a child (in one scene, it will turn out that she actually has a husband and a child). She feels great pressure from all sides, including the need to stay young, slender and beautiful, which can be seen in the costume choice.

Alice wears a corset over a blue dress (costume design: Mia Popovska) that seems to be made for children. That could suggest that she is not yet an adult even though she is in her thirties. Such a suggestion is confusing. If the fears that haunt Alice are a consequence of her immaturity, then the problems she faces are not real problems at all. Such a perspective would be extremely reactionary. For example, does this mean her concern about her job is a real consequence of a capitalist system or is it portrayed as a problem simply because she, as a weak individual, does not know how to stand up for herself?

The dialogue is incoherent, the characters’ motives appear only to disappear, threads of speech are regularly interrupted by illogical and arbitrary remarks. What could have been an intertextual achievement featuring one of the world’s most influential classics of children’s literature, comes across as an act of scribomania. The dialogue does not reveal any action and it is difficult to reconstruct the individuality of the main character, not to mention the other characters.

The whole ensemble tackles the impersonality of the characters with expressive movements, weird speech and sudden changes in mood and tone. But such changes are not the result of any logic, but by arbitrary playing with the dynamics of expression. In some scenes the actors are  fun and charming. But these are just moments in an otherwise long and exhausting piece. Nebojša Ljubišić is the most charming in the role of the White Rabbit/psychiatrist.  Sloboda Mićalović stands out as the Queen of Hearts, as does Milan Marić as the Hatter.

The director, Aleksandar Popovski, together with the stenographic duo Numen / For Use and Vanja Magić, have created some of the most important plays in JDP: Metamorphoses (2010) and Hamlet (2016). It seems as if Popovski, instead of trying to establish some order in this mess, withdrew and left the actors to fend for themselves. Milena Radulović was not able to find a solution. From the beginning to the end of her  monotonous interpretation shows no perceptible change. It is never exactly clear what Alice wants. All her fears haunt her equally. She interprets Alice more as a personification of the confusion, helplessness and indifference that arise under the pressure of patriarchy and capitalism, than as a living person.

The scenography had the potential to be seductive. Huge inflated greyish nylon bags fill most of the scenes. They are constantly swaying and reflecting the colours of the lighting, so each scene is enriched with vivid and enchanting paint. Again, even here there is no elaboration, no symbolism, just repetition. The actors pull these balloons across the stage, step over and hide under them. Playing with the striking scenography in this way soon becomes uninteresting. And somewhere in the middle of the show, huge inflated nylons in the shape and colour of a hot-dog are dragged from the depths of the stage, where they  hang until the end – I do not know why.

The Yugoslav Drama Theatre’s previous play Zagreb-Belgrade via Sarajevo was extremely vague in theme, illegible and tiring to follow. Alice in Fearland hinted at being the opposite. Sadly, this proved not to be the case – it is two and a half hours of vague repetition that bores its audience and is another project on which great resources were thrown away to little effect.