Belgrade Drama Theatre (BDP) has often included performances based on famous films in its repertoire. To name just a few: Play It Again, Sam (2009), Harold and Maude (2010), Black Box (2017, based on the Italian film Perfect Strangers), and Ugly, Dirty and Bad (2020), all mostly well-known and popular comedies.

A fanatic of high culture would inadvertently write off such a repertoire as trivial and populist. The last production of BDP, Shakespeare in Love (Zaljubljeni Sekspir), based on the romantic comedy of the same name from 1998, which won seven Oscars, may also fall under that condemnation.

The film was directed by John Madden, written by Marc Norman and playwright Tom Stoppard. The screenplay for the theatrical performance was adapted by Lee Hall. The Oscars very rarely recognize comedy as a genre worthy of attention, let alone awards. However, to dismiss a romantic comedy as mere entertainment is naive to say the least. At the core of the plot of this popular genre, we usually face essential social problems that prevent two people in love from being together.

For example, the theme of Notting Hill centres on the class gap between the rich and famous movie star and an ordinary bookseller. Similarly As Good as It Gets shows the horror of the American health care system (and which also did well at the Oscars), in a story about a compulsively obsessive, but very rich writer of romance novels, who wins the heart of a poor waitress by paying for the treatment of her sick son. The reasons why two cannot be together are not only individual, but imply a broader social and cultural context. A good romantic comedy always explores serious ideological issues through an easy, simple and fun form.

True love in romantic comedies is possible only when the obstacles that prevent the couple from being together are the strongest. When real life begins and when love meets the rut of everyday life, then both comedy and romance disappear. Shakespeare in Love is no exception in that sense, because it also talks about the forbidden love between a poor poet Shakespeare with a writer’s block and the rich Viola de Lesseps, eager for an adventure.

She is to marry the arrogant and insensitive Lord Wessex who has no money, but in return offers his title. Viola sees in the theatre the excitement and vitality that the formalized and cold high society to which she belongs lacks, and Shakespeare finds inspiration in her beauty and longing for poetry.

If a romantic comedy does not meet the criteria of good entertainment, then there is no incentive to analyse its content as a mirror of a society. In the BDP production of Shakespeare in Love, director Ana Tomović successfully stages a dynamic and playful ensemble performance. However, some decisions regarding the visual identity remain vague.

The set design by Aleksandar Denić, as suggested by the Production Handbook published by the Disney Theatrical Production Company, is inspired by the approximate appearance of the multi-levelled structure of the Elizabethan Theatre. What is specific is the impression of its incompleteness. The wooden structure is not decorated or painted. The BDP logo is left on parts of the structure, which indicate which part of the scenography represents the left part of the terrace, pillar or door of the storage room and so forth.

Such incompleteness suggests an attempt to experiment with the self-consciousness of theatrical illusion. Just as Romeo and Juliet appears as a play within a play in Shakespeare in Love, so Shakespeare in Love itself can be an inserted drama in the drama of life according to the principle of ‘All the world’s a stage.’ The fact that the theatre and life are equally fictional and that they represent two sides of the same coin is illustrated by the costumes of Momirko Bailović.

Under the Elizabethan costume, some actors wear modern sneakers. The striking incompleteness of the scenography and the anachronistic detail in the costume design are in no way significantly elaborated in a meaningful way, but feel like an arbitrary stunt. 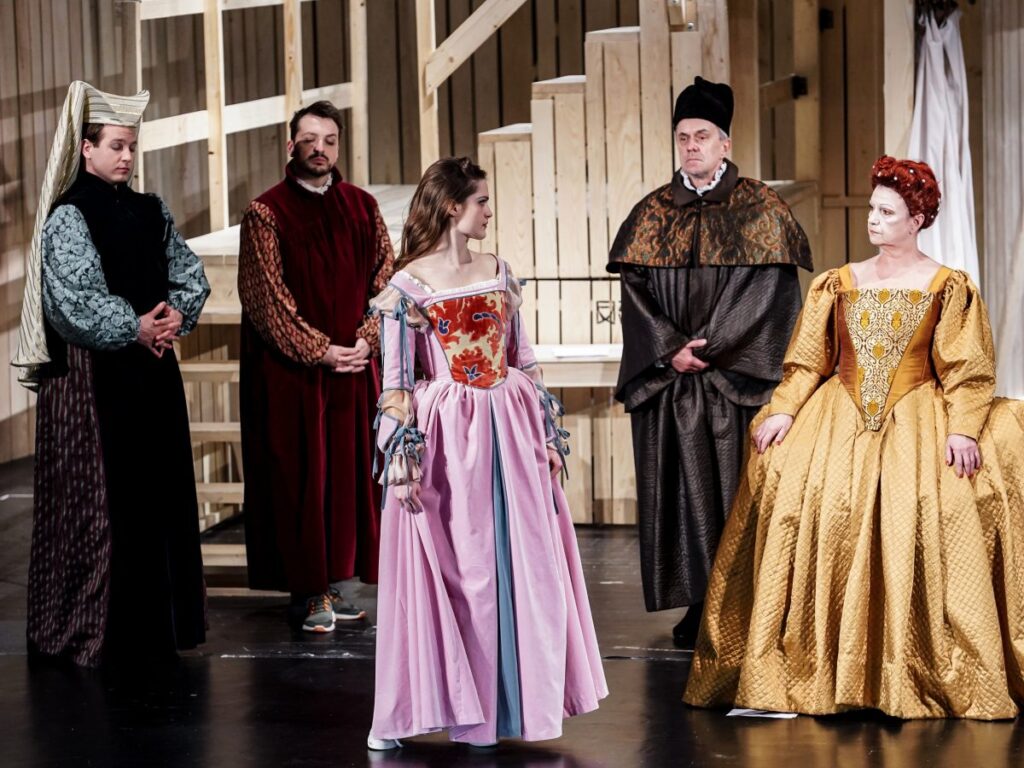 What makes this production of Shakespeare in Love so magnificent is the skill of the ensemble. In the last few years since Jug Radivojević took the role of director, BDP has rejuvenated its ensemble and employed a number of talented actors. While in many theatres in Serbia you can feel the atmosphere of uninterested routine coming from the stage, in BDP every performance is filled with enthusiasm.

This is especially the case in Shakespeare in Love, in which most of the new younger members perform. Luka Grbić, a BDP scholarship holder, convincingly interprets the character of William Shakespeare and demonstrates first-class acting skills. His acting with ease and naturalness produces a whole repertoire of mental states and emotions. We see him in a series of opposing situations: from the originally conceived writer with a lack of inspiration to the enthusiastic and inspired poet; from passionate and blissful falling in love to a broken heart; from a dedicated artist to a grieving man with a sense of guilt over the death of a friend; from well-timed comedy to heart-breaking grief. It is usually said that young actors who show such artistic maturity have the potential to be great performers, but Grbić already is great.

The skilful performance of the main actor is supported by a whole plead of exceptional supporting roles: arrogant Lord Wessex (Aleksandar Radojičić), theatre enthusiast Philip Henslowe (Andrej Šepetkovski), bloodthirsty John Webster (Amar Ćorović), confused Wabash and the boatman (Zoran Đorđević) and many others. But the two stand out. Aleksandar Jovanović in the role of Ralph is just as humorous and funny as in many other smaller roles assigned to him in BDP. His ability to provoke a successful comic effect with just one gesture or word is a real theatrical rarity. It is time to see that actor in the leading role in some future project. It would also be especially desirable to watch Dragana Varagić more often. In just a few brief appearances, the actress, in the role of Queen Elizabeth, performs an acting master class. In a short performance, she creates an incredibly complex character of a sovereign who seeks easy entertainment in the theatre because she performs the most demanding state duties every day. With perfect control of her voice and facial expressions, she produces stage eruptions with miniature gestures that surpass even the famous performance of Judy Dench in her original film appearance.

Despite the fact that in the end the lovers separate, this show ends in an optimistic note. How is this possible? Before she even saw Shakespeare, Viola was already in love with Shakespeare’s verses, and he first heard her speak his text with dedication. Before he even saw her, Shakespeare fell in love with Viola’s acting. There is a bet in the play: can theatre faithfully portray true love? The basic theme of the nature of true love becomes more complex because addresses the class relations and gender roles.

Shakespeare’s theatre usually implies a situation in which the poorest strata imitate high society for their entertainment. By descending from the sublime palace into the chaos of the theatre and falling in love with an ordinary writer, Viola transcends class barriers. Since women were forbidden to act at that time, she broke through strictly separated gender roles, but also provoked heterosexuality – when Shakespeare first saw her, she was dressed as a man. To whom or what has he fallen in love? With a man or with brilliant acting? Or did he only fall in love with Viola later when he found out who she really was? Or was the passion between them the result of resistance to their repressed desire?

The bodily consumption of their love is only a material proxy that hides the fact that their love arises as a product of a complex power relationship and an effort to meet different social and cultural needs. Viola needs Shakespeare’s romanticized vision of high society to which she belongs. Shakespeare, on the other hand, seeks an authentic experience of a forbidden love adventure with a rich beauty that is promised to a lord, so he himself can indulge in the imaginary world of his writing.

Their true love arises within the framework of art through which they fill their existential emptiness. Equalize their origin and there will be no sparks in their relationship. Get the theatre out of the equation and there will be no bridge between them. When Shakespeare finishes his play and Viola plays her part, then the stage where it was possible for their love to emerge disappears. Thanks to the fact of their forced separation the faith in love remains, illusion is continued. This is what makes a sad ending optimistic, even desirable. Their repressed desire becomes the desire for repression and that functions as the condition of true eternal love that will live on in art form.

There is one weakness in this context, one detail that destroys the credibility of this otherwise good production of Shakespeare in Love. Where they are ready to accept the theatrical illusion, the actors will be able to kiss, and where they stop believing in the illusion, a falsehood occurs. When Luka Grbić and Stanislava Nikolić, in the role of Viola disguised as a man, need to kiss, they will do so. When Luka Grbić and Ljubomir Bulajić in the role of Sam disguised as a woman should kiss, the actor’s hand will slip between their lips thus preventing the true kiss to occur. The illusion is broken with this homophobic gesture.

Accept the deception, defend the theatre, embrace your fictional role, kiss truly with faith in
illusion and thus show the path of love!

For tickets and information visit: BDP.rs

Review of Kamen, a BDP co-production