Pulp romance novels and advice from fashion magazines might not have been taught at schools, but they were a key educational factor for women in Yugoslavia who wanted to learn about love. How to find the perfect man. How to seduce him. How to keep him. What to wear. How to put on makeup. How to behave. All the most important things in a woman’s life.

Published in 1981, Štefica Cvek in the Jaws of Life, the popular novel by Dubravka Ugrešić – also the basis for a 1984 film – focused on this type of essential literature on the art of love. Of course, she does not glorify the industry that prepares a woman for a man, rather Ugrešić approaches the whole thing ironically; her novel exposed and made meaningless the whole narrative that shaped a woman according to the needs of the patriarchy.

The form of the novel is inspired by sewing, a job reserved for women, the division into chapters is inspired by tailoring terminology. The author often appears as a character in the novel, thinking about how she will shape the fate of her main heroine, ironizing the difficulties that the protagonist Štefica faces.

Even in modern Serbia, the topic of sex and love, though as important as the air we breathe, still isn’t taught in schools. The topic of partnerships is not explored in educational spaces. When it comes to the problems of love, sex, relationships and living together, we are instead educated by the internet, social networks and streaming services.

The staging of Ugrešić’s novel by the Belgrade Drama Theater does not go explore this fully. Yes, it contains some jokes about how diseases are diagnosed on Google or how it is necessary to smile when taking pictures for Instagram even if we were crying a few seconds ago. However, Biljana Srbljanović, in her dramatization, does not go into more detail about this, she does not find a dramatic approach that would be equivalent to Ugrešić’s postmodern form of writing and metafictional intervention.

Štefica Cvek’s long search for the right man is reduced to one day, the action centring on a bachelorette party. Characters who do not know each other in the novel are merged into toxic partnerships. Male characters who are caricatures in the novel are psychologically developed. Mister Frndić, Stefica’s chosen one at the end of the novel, becomes the fiancé of her best friend Marijana. 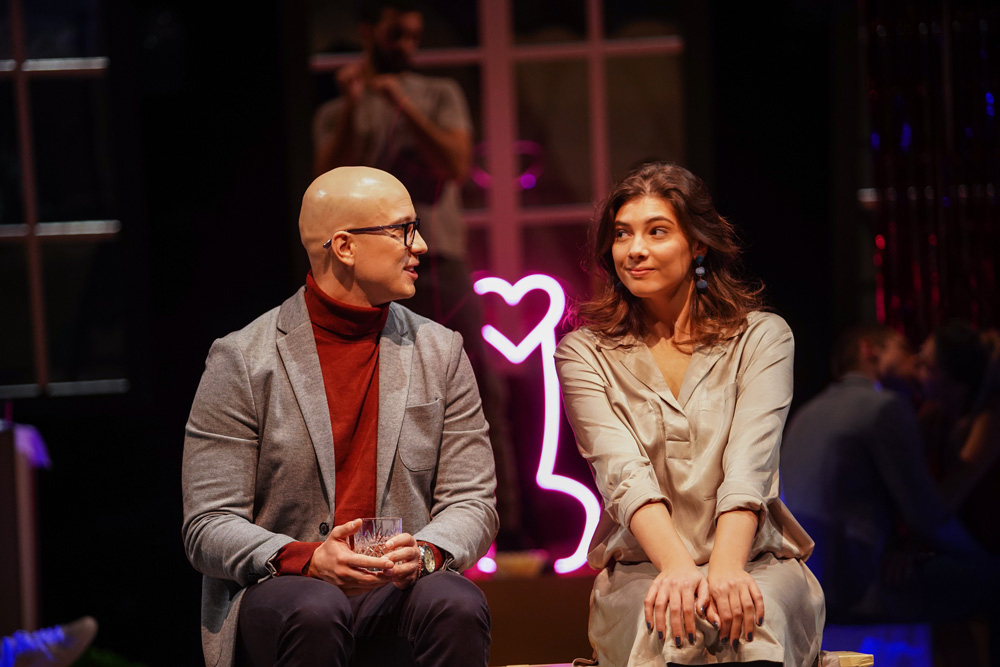 Srbljanović takes away the happy ending from Štefica. She points out the unfortunate circumstances of all the characters. Štefica (Iva Ilinčić) is lonely, depressed and lacks self-confidence. Mariana (Dunja Stojanović) who is getting married does not want to see her fiancé. Anushka (Vanja Nenadić) is in love with a married man. The women do not support each other and more than once enter into conflict. Štefica’s aunt (Vesna Čipčić) is an unhappy, nagging and ominous old woman. The male characters are equally hopeless. They become intoxicated. They jokingly insult and threaten each other. The insecure but tender Mister Frndić (Marko Todorović) doubts the love of his fiancée. Trokrilni (Luka Grbić), a bully and a seducer, cheats on his wife and deceives his mistress. Intelektualac (Miloš Petrović Trojpec) cannot get over the fact that his wife left him. Šofer (Aleksandar Vuckovic) is a sluggard with stocks of weed or cocaine for every occasion. By the end, no one is changed. Only the protagonist has experienced change – she decides to stop looking for love.

Srbljanović puts witty remarks in the mouths of this unfortunate group of people, thus disguising an essentially pessimistic text with comedy. Intelektualac ironically states that theater in general does not provide a meaningful commentary on modern society and that it does not offer people optimism. This is true of this show, which does not do this in any way.

The Belgrade Drama Theater’s young ensemble is the most enjoyable aspect of this production. They have the difficult task of playing defeated people in a comic manner, but they do not caricature their characters, they make them real people – people we can meet in our everyday lives. The male characters have a more witty and dynamic lines, so their performances are more distinct than those of the female cast members. Milos Petrovic stands out here. He excels in the role of a desperate quasi-intellectual. He has a perfect sense for pacing in the delivery of a joke while convincingly playing a serious person.

Some aspects of the dramatization could be said to be moving towards feminist criticism. The scenes of partying are often interrupted by the dialogic intermezzo between Štefica and Šofer, who have been in a long-term relationship. It is not entirely clear whether these conversations are the fruit of the imagination of the lonely Stefica or whether they represent her inevitable future. In these discussions, she accuses her male partner of not appreciating her enough. Of not being aware of her good qualities. Of not having a single picture with her on his Instagram profile. Of being ashamed of her, etc. He, on the other hand, points out that she listens to him, especially when he slaps his fist on the table. He complains that she is constantly hysterical and that he does not know what she wants. Although it is clear that the production wants to expose and condemn patriarchal men with these inserted dialogues, they feel forced. In one of the final scenes, Stefica has an emotional monologue within these interludes. She points out how men deceive women at the beginning of a relationship, and then they capture her emotionally and economically in a dark prison of marriage. This feels intrusively didactic, like a foreign body in the dramaturgical structure. 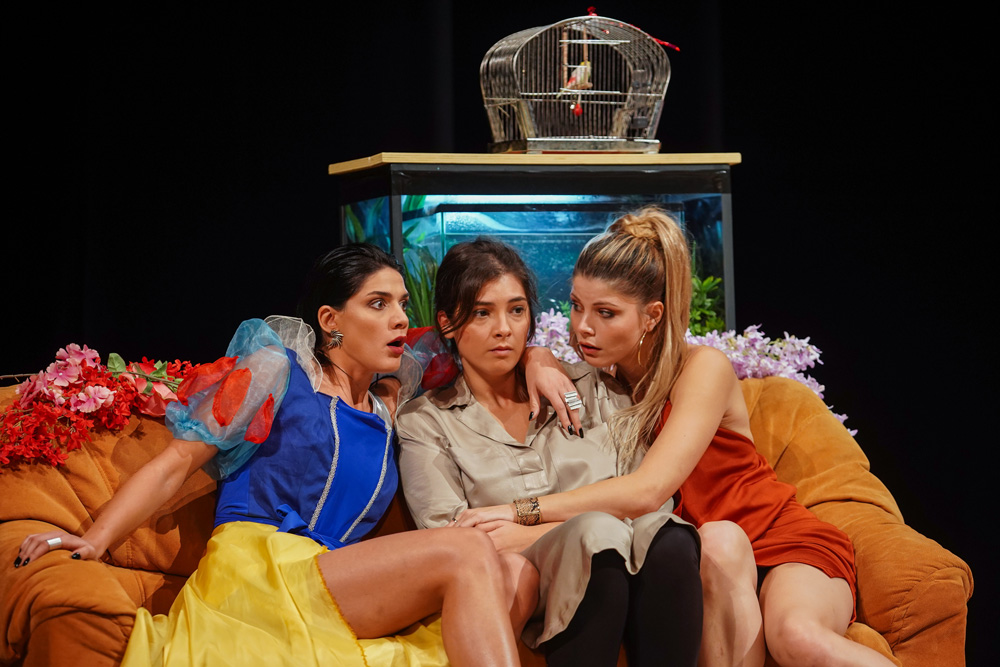 Director Andrej Nosov has missed the opportunity to make something more out of this pessimistic and seemingly feminist text. It feels as if the director chose to withdraw and let the text be directed by itself. Even the mise-en-scène is completely static. The actors sit or stand for most of the performance while exchanging remarks. The scenography (Una Jankov) represents Teta’s apartment decorated for a party. There is a pink sofa, a table and chairs dressed in white cloth, a refrigerator, an aquarium, a houseplant, balloons and decorative ribbons. There is also a strip-light in the shape of a phallus with a heart on top. It shines in the middle of a scene. But nothing more happens with it. It feels as if there was an intention at the beginning of the process to say something about male domination, but it was given up somewhere down the line. So, only the male organ remains – shining meaninglessly throughout the performance.