You are here:
croatiaserbia
Reviews 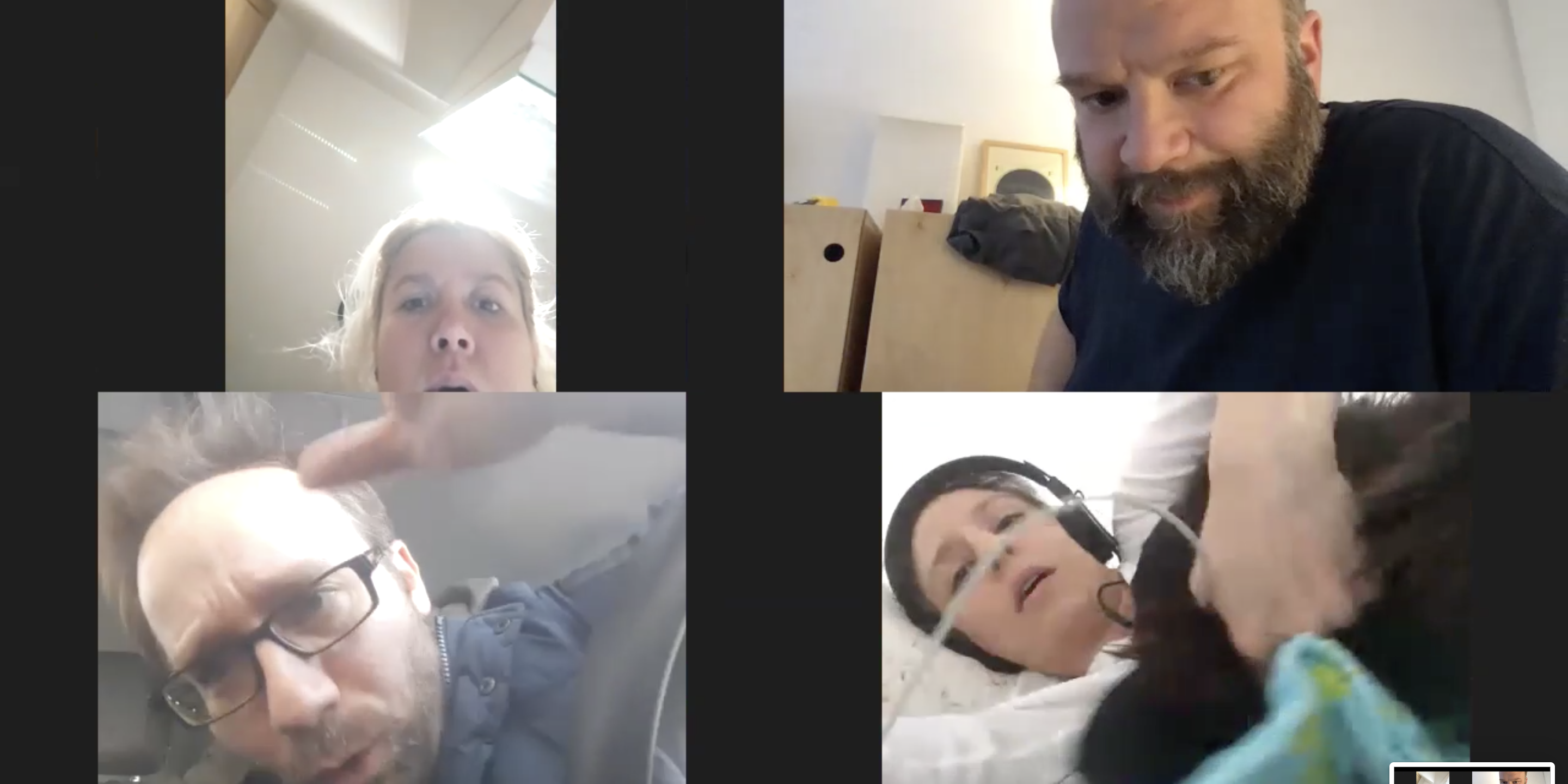 Since its foundation in 1967, Belgrade International Theatre Festival (BITEF) has been at the forefront of experimental theatre forms and innovative intercultural exchanges. It showcased some of the most important avant-garde and post-dramatic works from the sixties through the eighties – like performances of Richard Schechner, Jerzy Grotowski and Peter Brook – as well as traditional Asian art forms such as Beijing Opera and Kathakali Dance Theatre. During the Cold War, it was one of the few global hubs where artists from the East and the West could meet safely. During international sanctions of the 1990s caused by war and the break-up of Yugoslavia, BITEF continued presenting international performances, but put a special accent on regional ones. As the new century approached, it found a special place for technologically innovative works, but it took a devastating pandemic and a global wave of lockdowns for the festival to showcase the first performance that takes place entirely online – The Cherry Orchard in the Cherry Orchard.

The Cherry Orchard in the Cherry Orchard is a production of de facto theatre company from Zagreb, a company that liberally works across disciplines of theatre, dance and performance. The director Bobo Jelčić together with the cast of six made the performance in January 2021 during the Covid-19 wave that brought theatres in Croatia to a halt and they made it in the only way possible at the time, via Zoom. But unlike many other Zoom performances that use the medium as a pure necessity, Bobo Jelčić’s concept brings the story of Chekhov’s The Cherry Orchard to present-day pandemic stricken Croatia. The pandemic doesn’t play a large role in the story, but it’s the reason why characters see each other and talk during a single Zoom call. Lyubov Andreievna joins with her laptop from a flat in Paris where she currently spends her days, Leonid Gayev joins from their family apartment in Croatia, and Lopakhin is connected via his cellphone since he rambles the city with his car as an active businessman who doesn’t stop working even during a lockdown. 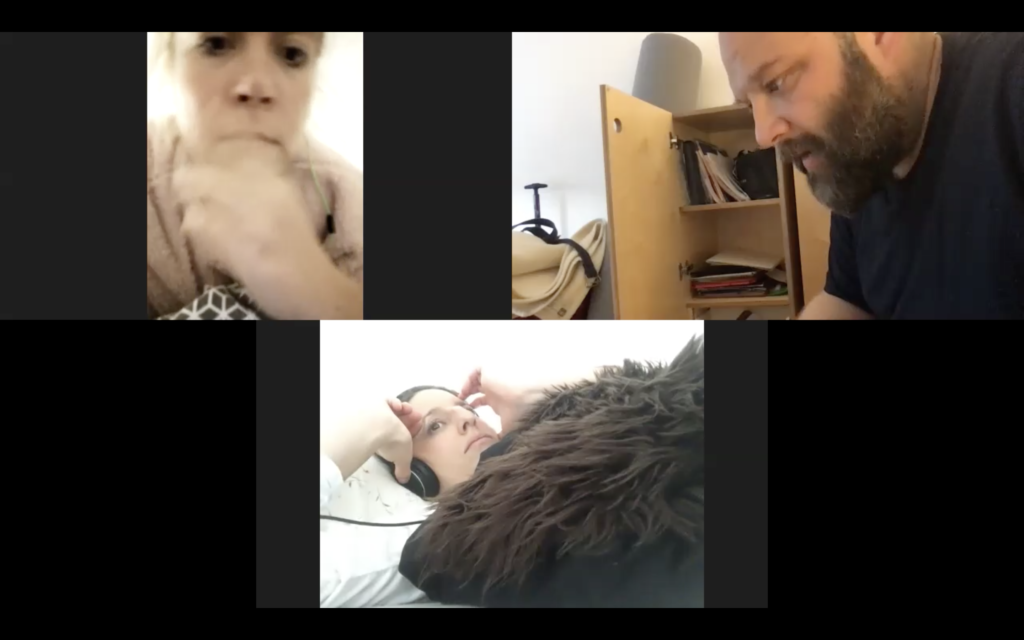 It’s fascinating how Jelčić and the cast bring to life contemporary versions of Checkov’s characters in a condensed show that lasts a little less than an hour. Since the main storyline of the Andreieveitch family losing their beloved property with the cherry orchard stays the same, Jadranka Đokić plays the passive Lyubov Andreievna who somehow believes that their cherry orchard will not be sold even though they can’t pay their enormous debt. During the whole show, she barely does anything else than laying down on her bed. Đokić skillfully plays her character as a calm person who just periodically has moments of despair. Jerko Marčić as Gayev is a confused and perhaps frightened character who wants to take steps to save the property, but is incompetent and only knows how to tell sweet optimistic lies to his sister and himself. Marko Makovičić as Lopakhin, on the other hand, is a hectic and talkative businessman who tries to cheer everyone up with his energetic movements and clumsily said anecdotes. Most importantly, he tries to convince the Andreieveitchs to save their property with his detailed business proposal. But, of course, no one listens to him and he ends up as an owner of the cherry orchard, emotionally torn between not wanting to hurt the Andreieveitchs and not being able to resist the fantastic opportunity.

Not a lot of critics, theatre practitioners and spectators noticed how The Cherry Orchard in the Cherry Orchard is deeply rooted in the socio-political context of the contemporary post-Yugoslav region. Many were amazed that the fully digital show managed to present the depth and subtleness of Checkov’s story while linking it to the pandemic, but the characters are representatives of different social classes just like in Ckeckov’s play. Lopahkin is a representative of the small but influential business class who profited from the transition to capitalism and who bought valuable assets for a low price. Lyubov Andreievna and Gayev, on the other hand, are the remains of a once strong middle-class which arose during socialist Yugoslavia. They look nostalgically back to the period and are inactive since subconsciously they believe that the state will always protect them. And it’s notable how Jelčić shows all this with just a few simple signs. For example, the beginning sequence sees Gayev taking Lyubov Andreievna on tour through their family apartment via camera – a spacious place with old but quality furniture and small decorations that point to the Yugoslav period, like the picture of Marshal Broz Tito that hangs on the wall and to whom Lyubov comically exclaims “there’s grandpa” (although sadly it’s unresolved if she’s joking or serious, which could have tremendous implications on the context).

This show in a way feels very theatre-like. Not only that it has live interaction between actors, but it’s also an adaptation of the classical play using the concept of actualization, an often used theatrical tool in the region and Central Europe. But it’s also hard to categorize it as theatre since there’s no interaction between the performers and the audience and the use of medium points more to video art or television than to theatre. For one part of the audience who watched the show as a projection at BITEF Theatre, the whole conundrum is even more confusing since it resembles the experience of cinema (the other part of the audience joined the show via Zoom). In the end, the hybrid form of the show might be one more thing that adds to its quality. And that’s certainly true for the monotonous regional realm of digital works that mostly based its existence on pre-recorded videos of in-person performances. The Cherry Orchard in the Cherry Orchard blends the best both from the classical and the experimental, regarding story and form alike.