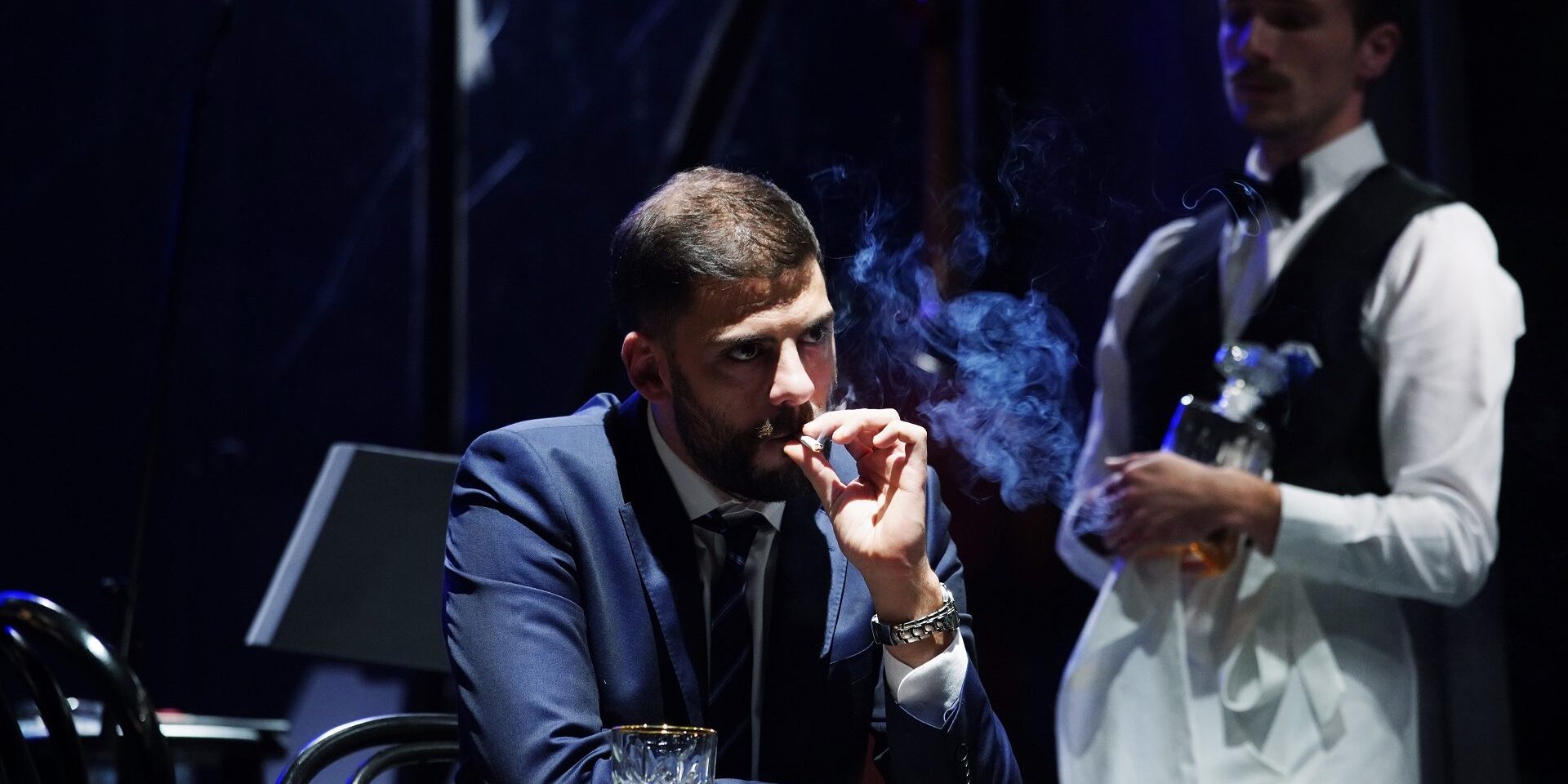 The new season at the Yugoslav Drama Theatre began with an ancient drama: Sophocles’ Oedipus the King, directed by the famous Slovenian director Vito Taufer, his first time working in Serbia for some years.

Oedipus is a play that marked the formulation of the old and modern European thought and continues to serve as an unlimited playground for theoretical and theatrical games.

Taufer’s directorial approach connects a contemporary context, in terms of costumes, scenography and music, with archaic textual characteristics such as faith in Greek gods and belief in the truth of prophecies.

Taufer locates the play in a nightclub-like restaurant. This is a world of dimmed lights, whiskey, and clouds of cigarette smoke – a world inspired by noir films. The actors speak concisely and slowly, mastering the art of speaking in verse so that it gives the impression of everyday speech, but also the secretive communication of noir (stage speech: Ljiljana Mrkić-Popović).

However, this noir atmosphere is not carried out through to the end. As the play progresses, a gloomy and reserved performance style is replaced by an emphasized emotionality that is necessary for achieving tragic pathos.

In the role of Creon, Srđan Timarov stands out among the cast as someone who manages to maintain the initial noir tone. He provides a perfect demonstration of the way moments of high tension can be performed with low intensity, with nuances coming to the fore. In the title role, Milan Marić shows a great deal of reactivity to every new situation. His Oedipus resembles a typical Serbian politician; he is quick-tempered and always restless even when he learns information that seems to improve his situation, and especially when things start to fall apart. That’s very effective on stage, even though his brutish Oedipus does not resemble the wise man who manages to solve the Sphinx’s riddle when all of Thebes could not, and who is always one step ahead of entire polis.

Nataša Ninković plays Jocasta as the type of person  who thinks first and only then reacts emotionally. Her famous naturalness and spontaneity as an actor come to the fore in the context of Greek tragedy. Because her Jocasta receives everything first with her head, and only then with her heart, the contrast between her original calmness and later emotional collapse is made possible – something that wasn’t the case with the almost always tense Oedipus.

The actors are dressed in contemporary business suits, waiter uniforms, priest’s robes, and elegant evening dress (costume design: Marija Marković Milojev). Only the costume of Tiresias (Bojan Dimitrijević) carries an ambivalent meaning. He wears a man’s suit, trousers and a pullover, combined with red high heels. But, according to one account attributed to Hesiod, the goddess Hera condemned Tiresias to spend seven days as a woman, which may explain Tiresias’ costume.

The scenography, by Lazar Bodroža, features one large table and two microphones, which at the beginning, represents the press conference where the priest begs the ruler Oedipus to help the country ravaged by the plague. Later, the entire space is transformed into a restaurant where the rest of the performance will take place.

These choices create paradoxes that require the audience either to overlook them or to work them out independently. A modernized Oedipus makes the use of messengers redundant – the audience must ignore the anachronism. The presence of the orthodox priest and the reference to Greek deities may draw attention to the pagan features of orthodoxy, but the audience is left to treat that suggestion freely. In fact, the direction opens up several such spaces for free interpretations.

It’s interesting to note that the beginning of the new season at JDP resembles in many ways the main production of the previous one: The Miracle in Šargan, directed by Jagoš Marković. One takes place in a tavern, the other mostly takes place in a restaurant. Miracle is made up of an abundance of folk motifs, while the chorus in this staging of Oedipus is replaced by Serbian Orthodox priests and the staff of the restaurant i.e. the sacred and secular centres of the nation. In both performances, the musical elements additionally emphasize ethnic localism. In the case of The Miracle in Šargan, we hear recordings of original folk music, while in Oedipus, excellent musicians perform live newly composed songs by Robert Pešut – Magnifico and Aleksander Pešut.

However, the productions differ in one significant way. Whereas in The Miracle in Šargan, metaphysical forces prevent recognition and tragedy comes from the loss of identity, while in Oedipus, a metaphysical force in the form of a prophecy encourages recognition. This leads Oedipus to the knowledge that he killed his father and married his mother, that he is a father and brother to his children, a husband and son to his wife. Tragedy arises from the realization of identity.

The contradictory messages of these two productions does not suggest recklessness in the repertoire of JDP, rather a consistent presentation of the identity crisis of Serbian society and politics, which is divided between East and West, church and Pride, ecology and industry, traditional and progressive values. The fear of losing one’s identity and the fear of one’s own identity is at work at the same time. In that respect one could argue that The Miracle in Šargan and Oedipus are complementary plays. Though independently entertaining, only in the duality of comparative observation do they become aesthetically and politically relevant and compelling.

The Miracle in Šargan reminds us of the virtues of our lost identity. In Oedipus, the character of Tiresias announces at the beginning that Oedipus is looking for himself. The investigation that follows is no longer a search for the truth. Oedipus examines how much evidence is needed to prove him the culprit of the disaster, so that no one can pretend anymore that we didn’t know this long ago. In this way, Oedipus reminds us of all the rotten parts of our current identity.