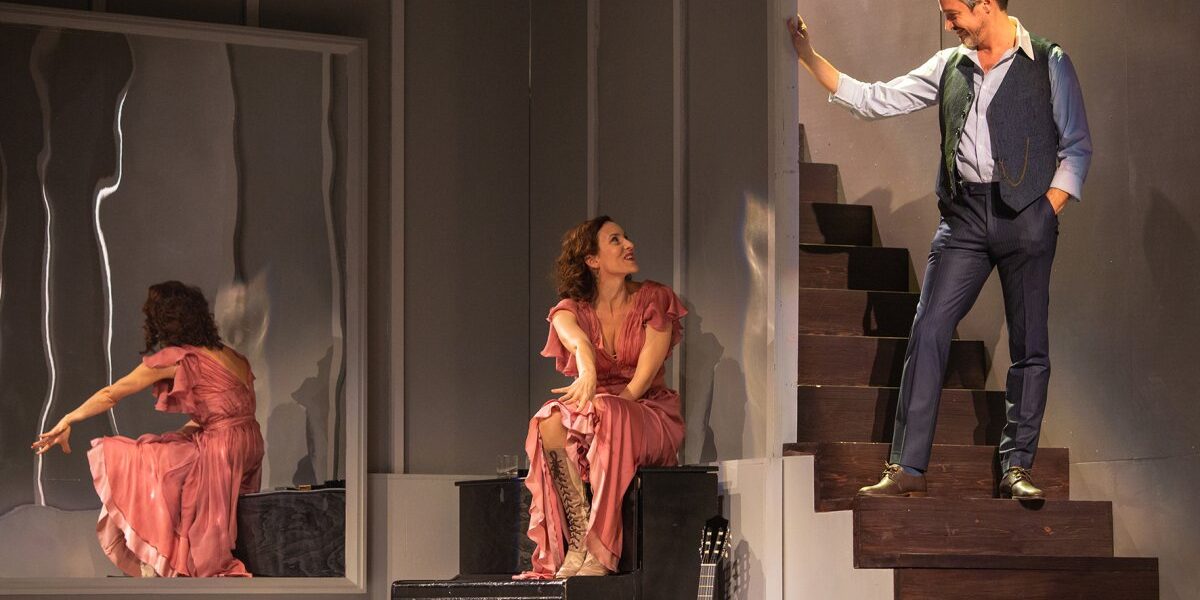 Ibsen’s play A Doll’s House is the perfect example of a classic that invited different interpretive approaches.

Nora is often depicted as a feminist heroine who defies the patriarchy, leaves the husband who treats her as property and goes out into the world to find her new identity and freedom. More conservative thinkers mostly criticise Nora for the same reasons. The fact that she leaves her three children leads them to condemn the protagonist as cold and egocentric – a woman fulfilling her selfish needs and placing her individual development ahead of family and society.

There are also those rare interpreters who see in Ibsen’s dramaturgy an apologetic approach to the subordination of women. Nora does everything to save her marriage and her subordinate position within it. When she realises that the man she married is not what she imagined him to be – strong and protective of his property that is his wife – she is disappointed. According to this interpretation, Nora is not a supporter of women’s emancipation, on the contrary, she is a supporter of unquestionable male domination and unwavering will. She leaves the family because she no longer sees in it those patriarchal values ​.

This can be seen in the visual identity of the play. High grey walls surround the wide open space of the Torvald family’s living room filled with a piano, guitar, silver Christmas tree, huge mirror on the wall and a chandelier that looks like a bird cage. Helmer Torvald’s grey suit befits the cold atmosphere, while Nora’s numerous brightly coloured dresses defy such a room. That design concept suggests a contrast between the restrained and serious Helmer and the seemingly childish and frivolous Nora. He seems to be merging with the lifeless house while she brings life to that same space and makes a home out of it.

At the same time, neither the space nor the costumes clearly indicate the time period. While some details point to the fashion of the past, the sudden taking of a selfie situates the action in the present. While the play says that the home of the Helmers is modestly furnished, the square footage and monumental nature of the scenography point to great wealth of the Helmers. While Torvald admonishes Nora for spending too much and while Nora secretly has to do extra work to pay off her debt, the Torvalds have enough money to spend on a full-time maid/ nanny who also plays the piano if needed. Who else lives like that today except the rich? And if they are so rich, why did Nora ever have to borrow money to treat her husband? Why are there still rules that a woman cannot take a loan without her husband’s knowledge in the time of android phones? We do not know exactly to which class Nora and Torvald belong, or when this is set. It meanders freely through different circumstances

The character of Torvald bears the least resemblance to that in the play. He is vain and conceited. When Nora (Nada Šargin) puts a red ornament on the Christmas tree, he moves the decoration a little to show that he has more sense of detail than his wife. When Nora dances the tarantella, he takes the position of a connoisseur, evaluating her dance as untrained. When he finds out that his best friend Dr. Rank (Hadži Nenad Maričić) is dying, he shows a complete lack of care and compassion. He fires the counterfeiter Krogstag from the bank, but although Torvald is aware of Krogstag’s misdeeds, he does not dismiss him because of this, rather because his subordinate Krogstag addresses him as a friend.

However this Helmer also has a cold, calculated and threatening nature. Nenad Stojmenović portrays him with great persuasiveness. He treats Nora as if he is above her. When he is sweet-talking her, it seems as if there is no sincere tenderness in those words. Instead, he seems to be concealing a restrained predatory threat. Stojmenović shows enviable acting skills when, with a forced smile and waving a threatening finger, he tells Nora she is his little bird. In the same manner he tells her what she needs and doesn’t need, what she can and can’t do. The latent bully reveals himself near the end of the play when he starts raping Nora, only to be interrupted by the arrival of Dr. Rank.

The gradation of the hidden threat that Helmer expresses culminates in this scene of attempted rape and is resolved in a confusing way. When Nora confronts Helmer’s and tells him what she thinks, her speech in no way refers to his subtle threats and attempted rape. At this point, the superior and dangerous Helmer suddenly becomes confused, obedient and pleading before Nora who has decided to leave him.

Nada Šargin’s Nora is the main stabilising factor in this performance, managing to overcome and connect all the directorial ambiguities. Her acting is chameleon-like. She convincingly adapts to all circumstances. Although the character of Nora has a lot to worry about (she forged her father’s signature, secretly borrowed money from the usurer and secretly earned money to pay off the debt), Šargin dances cheerfully, energetically and in a carefree manner in her first appearance. In front of Helmer she is kind, meek and naive. With his friend Kristina Linde (Katarina Marković), she shows her other side, an enterprising, strong and organised woman. In her performances between scenes, Šargin plays a panicked woman who is afraid of the possibility that her husband will find out about the secretly borrowed money. 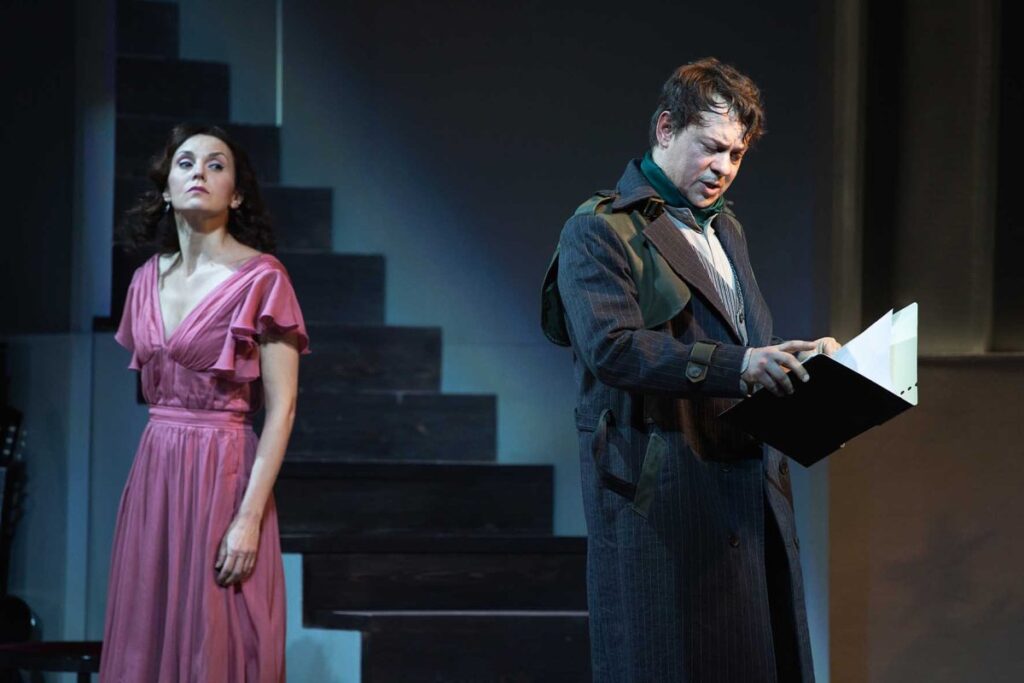 Šargin’s wide acting range corresponds to every possible interpretation. She is a feminist heroine who gradually becomes aware of her subordinate position in order to eventually rebel. She can also be a woman who wants to keep her subordinate position at all costs, because her will is the will of her strong and powerful husband. Only after she is disappointed in his protective and patronising nature does she decide that she no longer wants to be his doll.

With her skilful performance, Šargin manages to homogenise the semantically open performance not by reducing it to one possible interpretation, but by making all interpretive possibilities simultaneously active.

The attempt to rape Nora opens a contemporary and provocative theme – the theme of forgiveness, redemption and rehabilitation of criminals in the context of the cancel culture.

Helmer: Nora – can I never be anything more than a stranger to you?

Nora: Ah, Torvald, the most wonderful thing of all would have to happen.

Helmer: Tell me what that would be!

Nora: Both you and I would have to be so changed that–. Oh, Torvald, I don’t believe any longer in wonderful things happening.

Helmer: But I will believe in it. Tell me! So changed that–?

Nora: That our life together would be a real wedlock. Goodbye.

Although Helmer tries to rape Nora in this production, the lines by which she briefly considers their reunion are not cut out. This begs the question: what kind of crime deserves the permanent exclusion of the perpetrator, and what can be forgiven?

We should not forget that Nora herself committed a crime: she signed a document on behalf of her late father. But she did it to get a loan to treat her husband. The audience is on her side, but that does not mean that the law would spare her in case her crime is revealed.

Goran Jevtić’s magnificent performance in the role of Krogstag also evokes empathy in that regard. Although perceived as an antagonist because he was a usurer and a forger, we should not forget that Krogstag wants to redeem himself: I want to rehabilitate myself. (…) I have been struggling in most restricted circumstances. (…) Now I shall find a way to clear myself in the eyes of the world. His reputation prevents him from leading a normal life. When the character Krogstag speaks of his past crimes and the way society perceives him now, the audience cannot but notice that the personal life of the actor who was convicted of illegal sexual acts echoes through those lines. Those factual circumstances add much to the perception of the fictional universe of this performance.

It may not be considered appropriate by everyone to involve the private life of the artist in discussion of a performance, it is hard to believe that this particular actor was inadvertently chosen for this particular role with exactly these lines. Although this is a conventionally dramatic and not a post-dramatic performance in which the actors often openly place their identity to a fictional context, it is impossible to ignore the effect of reality and sincerity that ripples through the scenes with Krogstag. That is especially the case in a performance where the last words are: if we find honesty.

A dramatic performance that in any way evokes reality is in danger of disrupting the artistic illusion. To some extent, this happens, momentarily in this production of Nora. The illusion is briefly interrupted in order to uplift the topic in question, to raise issues that cannot normally be easily explored: where does the border lie that separates the acceptable from the unacceptable? Where is the border that separates the forgivable from the unforgivable?

Neither this play nor this text provides an answer to such sensitive questions. But when one is stepping on such sensitive ground, then just asking questions is of revolutionary importance.