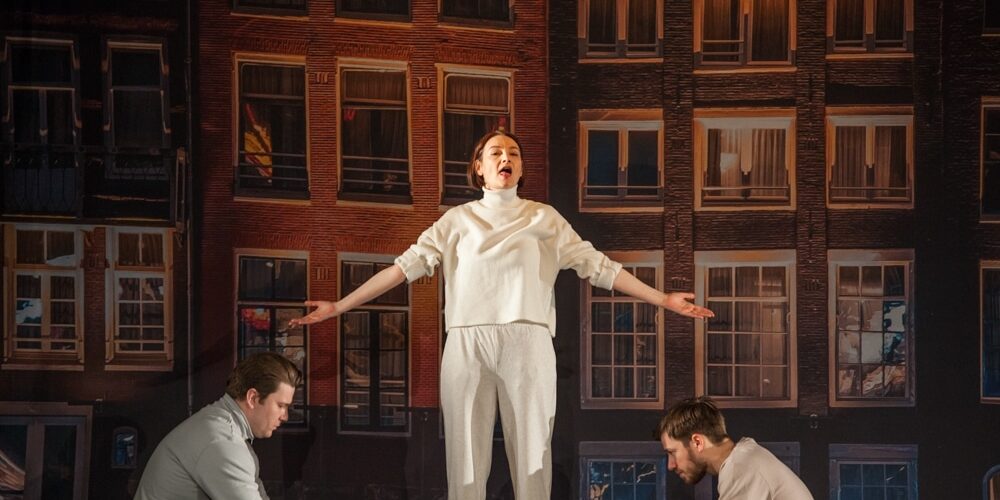 In a review published in Serbian daily Danas, Zlatko Paković accused the creative team of Amsterdam of cowardice. According to him, the topic of genocide is becoming a kind of staged social game, which, with an ironic deviation, is jokingly repeated, and when they could have staged the key event of their play, they did not dare to do it.

According to Paković if they want to talk about genocide they should speak about Srebrenica and how it was inspired by Serbian politicians, academics, and clergy. This is a legitimate objection if you demand that every theatre production must be translated into local context. Nevertheless, genocide is not the real subject of Amsterdam, rather the experience of living after a genocide.

Maya Arad Yasur’s Amsterdam is not written in conventional dramatic form. There are no characters or stage instructions. A note at the beginning suggests that the text be spoken by at least three people. Instead of a dramatic mode of expression in the first person is employed; the lines form an epic structure that is told in the third person by multiple narrators – storytelling through several people.

The information we get from these narrators is very often incompatible. Several voices argue about the facts as if they are establishing or fabricating them on the spot. These intentional ambiguities point to the inability of an individual to know all the circumstances of an event; in this way the drama examines the prospects for determining an acceptable version of a sequence of events.

Via this unreliable and fragmentary collective narrative, we manage to discern the story. The main character is an Israeli immigrant, a pregnant violinist, who lives in Amsterdam. She receives a gas bill of 1700eu dating back to 1944.

The drama is divided into two parts, charting two days of her life. The first part deals with her confrontation with racism and the attempt to translate the contents of the old gas bill. We see her going to the supermarket. She suspects that other customers are looking at her with hatred and prejudice because of the colour of her skin. In next scene, she is examined by a gynaecologist, where she thinks she is disgusting to the doctor. In both cases, we see only suspicion that her environment is racist. It all happens in her imagination. At the same time, it is a manifestation of internalized racism. Only in the meeting with her agent do we see one of the actual causes for her internalized racism. The agent advises her to write a requiem for 551 dead children in Gaza – it would be politically popular for her as an Israeli musician to distance herself from Israeli aggression in the Gaza War and to condemn it.

This ordinary violinist wonders: why do they keep smearing me with this blood? In that moment she refuses to be identified with her origin. Instead of a requiem for dead children from Gaza, she composed Starling paradox, a song that signifies the individuality of starling in a flock of birds that fly synchronously and uniformly. She is not interested in politics, but in paying her bill.

In the second part we learn many things about the hiding of Jews, the resistance movement, betrayal, concentration camps, rape, torture, death, survival, revenge, and the still unpaid gas bill made by the Nazis. The need for the tenant to deal with her problem in the form of an old gas bill with accrued interest brings her back into contact with the forces beyond the individual.

Both parts show one thing very clearly – no one is free of history. But it depends on the director as to what kind of relationship will be established towards this unfreedom. The director Iva Milošević does not take a clear position on the text. Her production is restrained in this sense, because it tries to leave questions open. The focus is instead directed towards the stylization of this open text.

The performance of the actors are crucial in this respect. Dragana Đukić, Ana Mandić, Dejan Dedić, and Marko Grabež are dressed in grey sweat suit, in a comfortable costume that marks out the actors as actors (costume designer: Marija Marković Milojev). They tell us a story, immerse us and identify with the text, while distancing themselves from it to create the desired dramatic effect.

In their precise, synchronized, and dedicated performance, no one falls out of rhythm. They all equally contribute to a well-harmonized production, accompanied by the compositions by Vladimir Pejković, who performs them live on an electric piano.

Gorčin Stojanović’s scenography is unpretentious and does not depart from its denotative function: the scenery is printed with Amsterdam architecture – tall, narrow houses in various colours.

In the first part the focus is on collective, recent, memories and condemnations. The narration is mostly about the contemporary context and the staging complements the performances. For example, while the main character is obsessed with suspicions that all the customers in the supermarket are watching her with hatred, the actress who embodies her is surrounded and captured by the other actors with shopping carts.

The second part is organised around more distant cultural memories and events from the period of the Second World War that took place in the apartment where the protagonist now lives. The actors have the task of reviving objects; from the kind of boxes that we may find in museum archives, a pile of clothes and shoes is thrown out.

The most impressive scene in the play shows – or rather doesn’t show – Nazi soldiers raping a woman. The actors put the women’s clothes on one chair, and then surround her with military boots, kicking and undressing, extinguishing a cigar at the place where the skirt was. 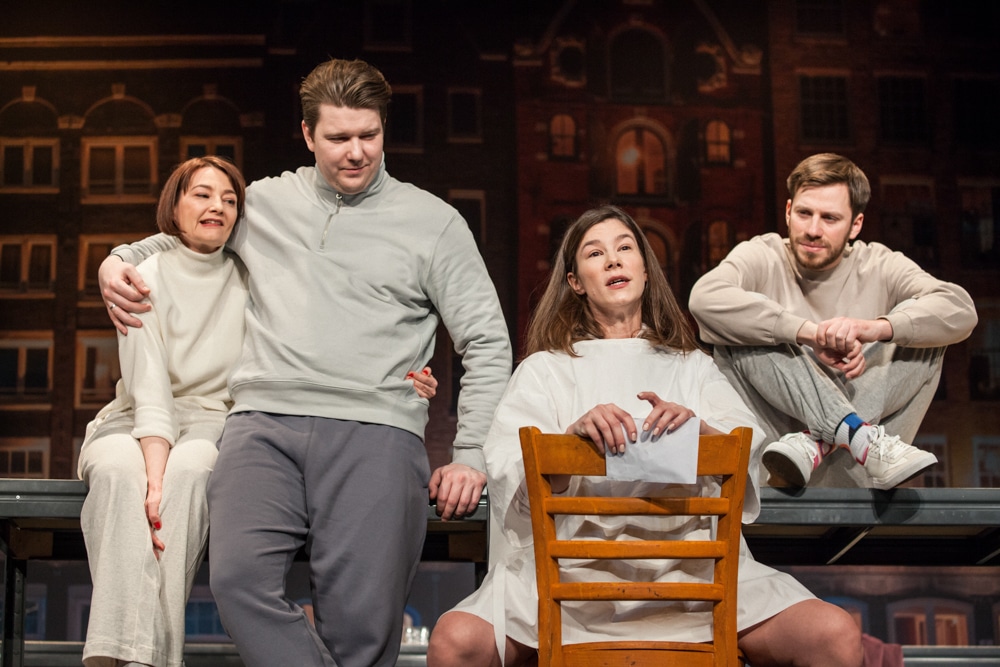 The cast of Amsterdam at Atelje 212, Belgrade

Only at the very end of the play do we have something that reads like an author’s commentary. Gathered in semi-darkness, the actors put a bunch of bills in a box and light a match, after which there is complete darkness. That’s the end of the performance. Neither the debt from the past nor the obligations of the present have been settled. The message is that we treat problems carelessly and recklessly, whether we face them or deny them. For this reason individuals can only approach them with a fiery response.

Perhaps it is not a lack of courage that led the creators of this production of Amsterdam to remain silent about Srebrenica. Perhaps such a sensitive topic polarizes the Serbian public and requires a pragmatic approach. Perhaps the direct path to confronting the Serbian society with Srebrenica has been so undermined by trauma, condemnations, and denials that it has become completely impassable, so the destination can only be reached by this round-about routes. Perhaps this then is the main virtue of Atelje 212’s decision to stage Amsterdam, because it presents a problem that is relevant to us: how one nation can be identified as both a victim and an aggressor and how can individuals deal with this identity of collective suffering and guilt.

What needs to be done? Where questions begin, the performance ends. Many, like Zlatko Pakovic, have the answers, but the way they formulated them does not suit the majority of the Serbian public. The public that denies Srebrenica rejects the truth. But the truth can be told in many ways. What constitutes the identity of an Israeli violinist after the Gaza War is the same question that a Serb faces after Srebrenica. What can an individual do with a collective debt? Can we expect more from a theatrical performance than pointing out this issue?

How do we talk about all this without having a polarizing atmosphere between denial or escapism and condemnation or self-condemnation of an entire community? The lack of answers to this question is one of the many sources of racism and internalized racism today.

That is the main theme of Amsterdam, and it is more relevant today than it was even at the time of its premiere. It opened on 11th February, and on 24th February, Russia invaded Ukraine. On 3rd March, the Metropolitan Opera in New York cancelled the engagement of the famous Russian diva Anna Netrebko. Instead, Turandot will be performed by Ukrainian singer Liudmyla Monastyrska. The nameless heroine of the play Amsterdam, is plagued by the Starling paradox, she is Israeli and Serbian, she is Anna Netrebko and Liudmyla Monastyrska; she is all of them and many others.