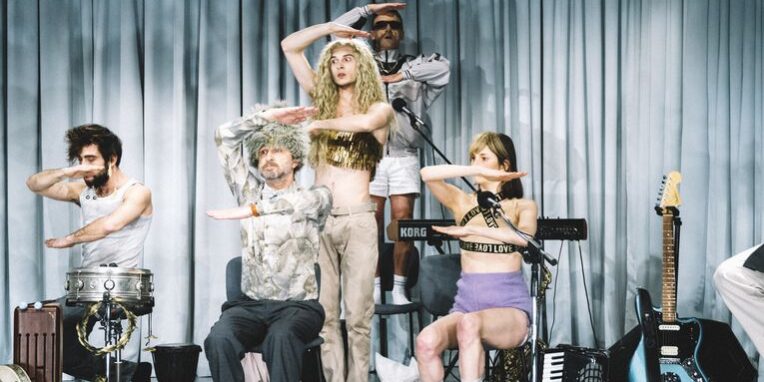 The first Slovenian performance by theatre and radio director Bojana Lazić for Slovensko mladinsko gledališče is divided into two parts.

The first part consists of a theatrical staging of the most extensively preserved section of Petronius’s Satyricon, Trimalchio’s Dinner (Cena Trimalchionis), one of two partially preserved “Roman novels” written in the 1st century AD, during the reign of Emperor Nero – who was a possible inspiration for Trimalchio.

The actors step on to the stage, put down their jackets and shoes, sit down in front of musical instruments – drumkit, guitar, synthesizer, saxophone, accordion – and start to play.

The freed slave Trimalchio (Ivan Godnič) is enjoying his new role on the social ladder and the power brought to him by money gained by the deep devotion to the ex-master and dirty business deals. During a lavish encounter, his slaves play in a band for him and his wife Fortunata (Romana Šalehar). They must obey their every command and applaud his every performance if they do not want to end up being thrown to the tiger.

Then, during the climax of this scene of wantonness, in which Trimalchio forces his own wife to sing and ring a bell around her neck, a break in the theatrical illusion occurs. One of the actors expresses doubts about the suitability of using the Slovenian folk song “On the Mountains, the Sun Shines” (Na planincah sončece sije). We are no longer in Rome, instead we find ourselves at the last rehearsal before the premiere. Instead of the characters of the ancient Romans, the performers assume more or less typical personifications of the actors of today. The cast is also joined by the play’s “director” (Daša Doberšek), who has been sitting among the audience until this moment. The seemingly innocent event of questioning the director’s decision grows into an act of rebellion and the stage becomes  a playground for revealing the relationships between the creative team and showing how manipulation can be a modus operandi when you no longer have tigers to feed.

The two parts of the performance are connected by a conceptually complete design by Zorana Petrov. It resembles an updated version of an aristocratic apartment and at the same time it is a (humorous) reference to “minimalistic modern” scenography.

It is easy to recognize the parallel narratives of the hierarchical relations in Trimalchio’s dinner and the theatrical process. The second part is even inspired by the first in terms of dramaturgy and the sequence of events. Both “masters” have to go to the toilet, during which time the others take advantage of their absence for partying, dancing and “mating” with each other. 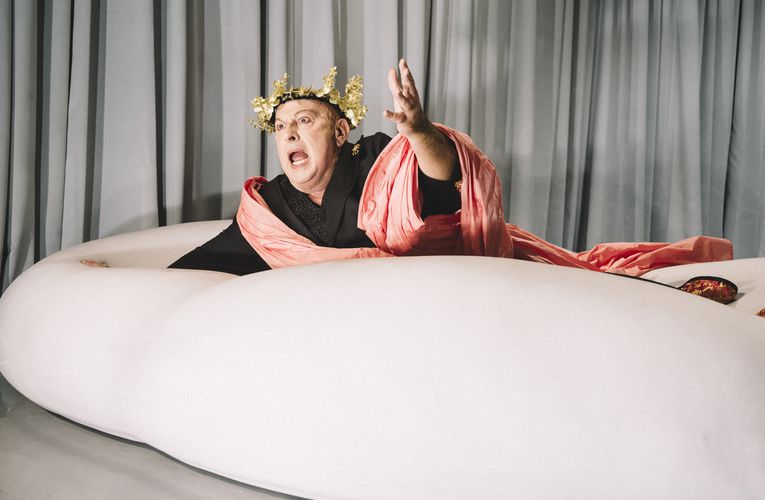 Despite the apparent symmetry of the performance, the approach to and the way of dealing with the common theme is very different. While the first part makes use of the literary grotesque, which glorifies ambivalent (joyful and at the same time mocking) laughter and puts a fool in the king’s place (well, Trimalchio), the second stems from the language and logic of parody as a tool for one-way ridicule.

The formal distinction between the grotesque and the parodic approach in the performance is reflected in the usage of the physical, the principle of the body. Trimalchio, with his (actor’s) stomach and embodied eating, is a classic image of Bakhtin’s grotesque body. Maja Mirković’s costume design also supports this idea, since Trimalchio’s cloak is too long for him, is in his way and he does not know what to do with it, as the position he occupies is too big for him. The performance highlights the lack, or in the world of the comic, the surplus of the characters through their physicality and movement. As in the original text, they use different linguistic and literary genres effectively on stage for comic effect and characterisation.  That said, in the first part, they still deal with meta-theatricality, only it is less overt and revealed in the staging – there is a song about a song written by the composer of the performance for the actress to show her own death (Janja Majzel).

In the second part, the performance is at its most effective when the principle of embodiment is used. Here the youngest cast member stands out. Klemen Kovačič justifies his character extremely skilfully via the invention of a specific way of movement that combines the devoted obedience of those in lowliest social position with overflowing youthful energy – we might say, with the spirit of satyr, Dionysus’ attendant.

But this is not the case with everyone. The use of embodiment in the second part takes a back seat, and the style of acting becomes less consistent. As performers, starting from their real-life roles developing their potential doubles, a certain divergence is visible within the choice and manner of their embodiment. While some characters  emphasize the generic features of their role within the social and theatrical space, others offer witty but less tangible images. This created a kind of safe distance from the subject. Along with the performers, the audience also reclined comfortably in their seats and laughed at the pretentious directors, oversensitive actresses, disengaged actors, egocentrics all (not like us).

This second part  focuses more on mocking a person’s “bad” traits, while the first part divided the “complete” person into “good” and “bad” as a disruptive element. It highlighted the human being as an individual rather than a member of the community. Emphasising individualization coincides with today’s zeitgeist, but it feels like a step back after we were presented with Trimalchio collective grotesque body that provokes ridicule while at the same time laughing at itself.

Lazić’s performance, a catalogue of imaginative meta-theatrical elements, is extremely entertaining, perhaps even more so for “theatre people”, who will recognize even the most subtle hints and in-jokes.  The audience is kept laughing throughout the performance. But this overflowing laughter gradually closes in on itself and increasingly starts to feel satisfied with itself.  Just like the audience. 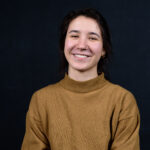