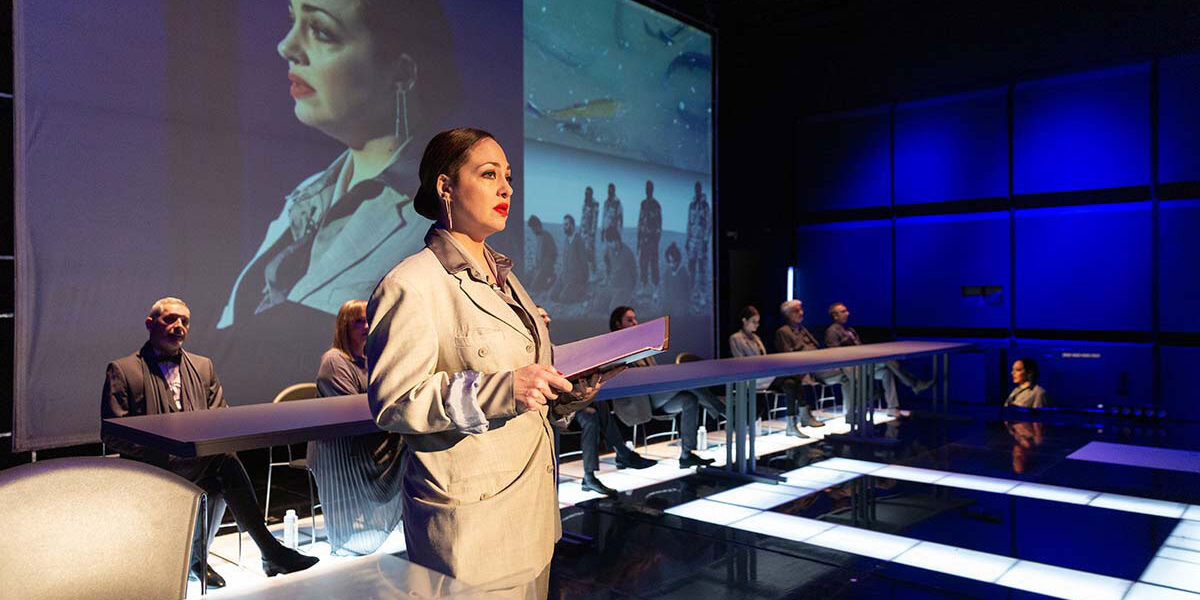 The conference participants climb onto the stage from audience to the sound of Beethoven’s Ode to Joy. They move in a coordinated way. Everyone sits down at the same time. For the rest of the performance, they are motionless and show no reactions to the presentations of other speakers.

Written in 2017 by Russian playwright Ivan Vyrypaev, The Iranian Conference is directed by Ivana Vujić, who also contributed to the set design. Together with Sonja Vukićević, who worked on the stage movement, they have created a stylized staging of a conference taking place in Copenhagen. Video projections accompany the presentations of each speaker, their faces displayed on a large screen, and alongside their face is a video of different thing each time the speaker changes: a snail moving slowly, a scene of crucifixion, a snail moving over an image of Yugoslavia, the sea, the EU Parliament Hall, then the Iranian Parliament Hall, an apocalyptic video game, the Vietnam War, pictures of Pentagon. The rhetorical hollowness of the presentations contrast with these seemingly randomly selected videos conveying the message that the world is falling apart.

And what are the presentations about? The cultural gap between East and West is the topic of the conference in Copenhagen. The intellectuals will not comment on such a topic. Their speeches are incompetent, reactionary and devoid of reality. They make personal revelations and affinities as political statements, and make quasi-philosophical arguments.

Anyone who has ever been to a scientific conference knows that they can be extremely boring even for those who deal professionally with the topics in question. For that reason alone, the decision to us such an event as a material for a theatrical play is very confusing.

The lack of thematic focus is even more confusing. Their motives emerge completely randomly and without any order or reason. One speaker describes what he wants and what he doesn’t want, what he likes and what he doesn’t like: he wants the soup to be salty enough, he doesn’t want to smell bad breath from the person he is speaking with, he wants his clothes to be nice, but not expensive… Someone else will ask in vain: why do I live? A melody from Tchaikovsky’s Swan’s Lake accompanies one of the speeches, because why not? The speaker talks about myth and unification with truth. What truth?

The intertextual connections with Shakespeare’s Hamlet don’t add much to this play. Yes, the conference is in Copenhagen, but the projection of Hamlet’s quotes about fortune do not bring anything substantial to the production. We know something is rotten in the state of Denmark. What about it?

One of the problems with The Iranian Conference is that Vyrypaev’s play is composed from a series of long and boring speeches spoken one after another. It takes almost two hours to establish one point – that intellectual debates are meaningless. In the end, the character of the Iranian poet Shirin Shirazi offers a solution. Unlike other participants in the conference who lament over their own and the world’s fate from privileged positions, the Iranian poet spent most of her life in captivity. For that reason, her words carry great authority, which goes beyond that of the other speakers.

Her message is a simple one – you must believe and you must love. This feels like a banal solution. It is as if the power of the message is directly proportional to the amount of suffering that the sender has suffered. A further implication is that we cannot understand the essence of any serious problem if we haven’t suffered, and not just any suffering will do. It must be great suffering. A Western intellectual simply doesn’t have the authority nor understanding of any serious problem – because he hasn’t suffered enough.

There is a degree of cynicism to The Iranian Conference. Education and doctorates serve no purpose, and intellectuals are just one type of deceiver. Although this is often the case, this generalization undermines trust in the work of those public intellectuals who really understand and describe the world well.

Vyrypaev arms his speakers mostly with conservative, religious and outdated ideas. Most of them speak in metaphysical categories of god, faith, love, and the meaning of life. Vyrypaev presents those few speakers who nurture attitudes that we might recognise as progressive attitude as if they are parroting fashionable doctrine. If thinkers like Noam Chomsky, Slavoj Žižek, Gianni Vattimo, Charles Taylor, Martha Nussbaum, and Alain Badiou, for example, were visiting this conference then the appearance of the Iranian poetess might have seemed more  unconvincing. The emotional blackmail would not succeed in the face a strongly argued debate.

What the director Ivana Vujić wanted to achieve with this production remains a mystery. The results are often deeply boring. The actors try to make these empty and meaningless speeches feel dramatic, but the text is resistant to any meaningful interpretation and when Ivana Žigon, in the role of the Iranian poet, starts to speak, the whole thing reaches the limits of unwatchable absurdity.