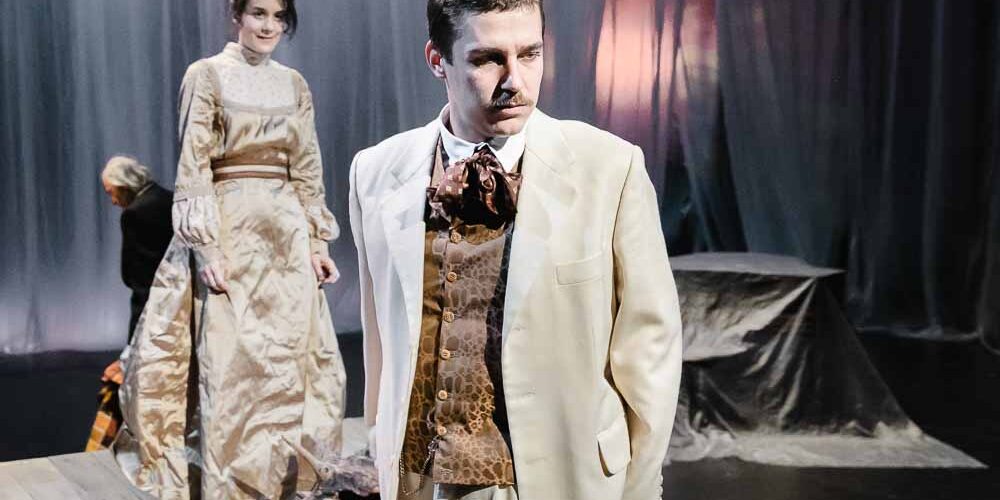 Ivan Popovski returns to Zagreb Youth Theatre with another staging of a Russian classic. His three-hour long adaptation of Dostoyevsky’s The Idiot was well acted by the ensemble and a marvel to look at – a captivating spectacle. This time Popovski directs Chekhov’s last play The Cherry Orchard  in an equally visually and dramatically striking staging.

Popovski dresses most of ZKM’s vast hall in white, plastic sheets, only reserving a small corner for a historically-decorated room which stands in for the whole Andreiev family estate. Emphasizing the emptiness of the stage and choosing to mark the existence of the grand cherry orchard in a minimalistic way through the use of ‘blank pages’, Popovski’s interpretation creates a sort of nostalgic absurdity – creating a sense of melancholy for no good reason save for the inability to fill in the pages of the book of life.

At the start of the play, the housemaid Dunyasha (Petra Svrtan) and the wealthy merchant Yermolai Alexeievitch Lopakhin, son of a former Andreiev family’s serf (Ugo Korani) sit half-asleep between the antiquities, awaiting the return of Madame Lyubov Andreievna Ranevskaya (Katarina Bistrović Darvaš) and her entourage. This sets the tone for the production. Sequence of physical comedy are juxtaposed with Chekhov’s sentences, making it clear from the beginning that Popovski and his artistic collaborators plan to respect one thing that is often forgotten about Chekhov – he was a writer of comedies.

Comedy is only a fine line away from tragedy. Yet to dance on this line and not fall or even slip into pathos, is probably one of the hardest things to accomplish. Relying on their physicality, on this omnipresent sentiment that the human body is put in space as a joke conducted by the universe – always knocking down some piece of furniture or finding itself in an awkward position. The actors maintain this sense of the comical in their stage presence. 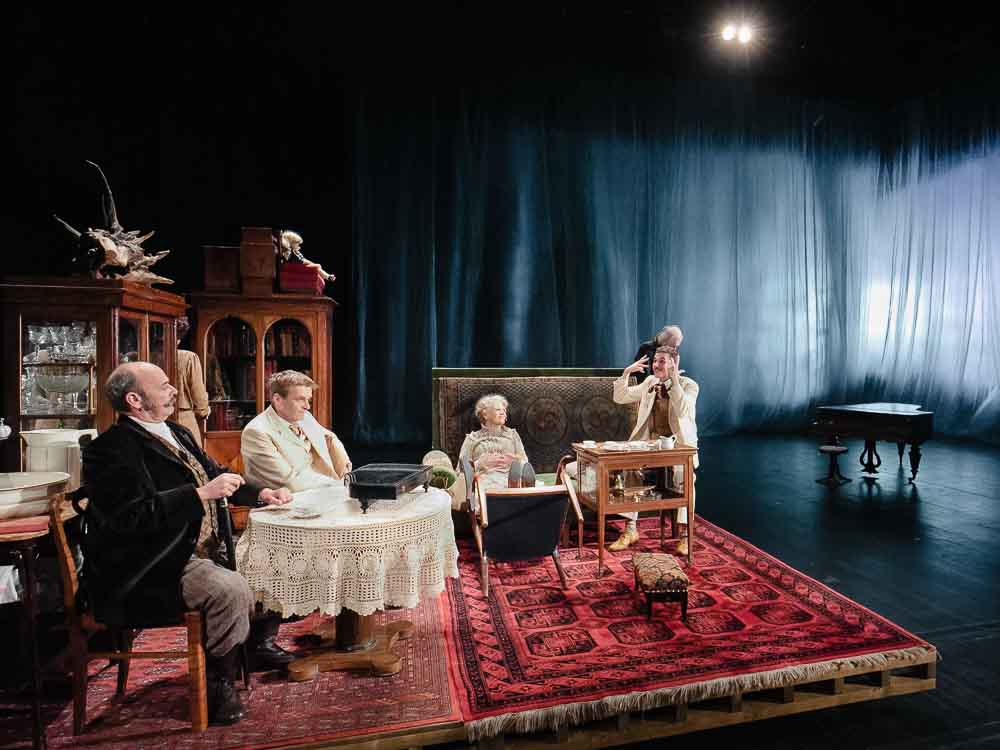 In the outsize stage world of the orchard and the estate, human figures cannot be anything else but distorted, forever lost in respect of what could and should be done on this planet. They always seem to air a bit ridiculous stuck, either stuck between the couch and the table, or moving around so as not to usurp the wooden furniture.

Chekhov’s The Cherry Orchard (as with most of his plays) is at the same time sharp but also a gentle and sentimental outlook on the state of Russian society and the turbulences caused by the changes in the class system. What is ironic about Chekhov’s approach is that characters like Lopahkin (Korani) who are able to prosper in their new-found circumstances, end up in an even deeper existential dread when they climb up the ladder than the ones they surpassed on the journey up. Becoming an owner of the famous cherry orchard in which he was once a mere servant’s boy for Lopahkin is more a source of shame than pride. It is as if he considers himself a mere usurper of the lightness of being that only the aristocracy possess and truly feels remorse that it cannot be upheld, just like the old orchard cannot survive.

On the other hand, the Andreiev family brother (Leonid Andreieveitch Gayev, played by Filip Nola) and featherheaded sister Ranevskaya who is in debt and in the process of losing her childhood home, still gives a golden coin to a passing stranger (Kristijan Ugrina), no matter how deeply aware they are that the society they knew is slipping away underneath their feet. They ate consumed by the seductiveness of melancholy and self-pity, blissfully doing nothing.

Popovski stays perfectly attuned to these layers of irony in the play, to this penetrating feeling that not much can be done about life: like the cherries in the orchard it is not to be picked up, but marvelled at its decaying and rotting beauty which will somehow regenerate again and again, season after season – until it will not.

Music is a kay part of this staging, presumably thanks to the dramaturgical work of Ivana Đula who also comes from a musical background. The musical quartet even joins the actors on the stage at certain points, playing the most significant role in the second act dance scene which is happening parallel to the auctioning of the Andreiev family property. It is a macabre scene with a whimsical undertone in which the whole company moves along with the live music, enjoying themselves whilst the destiny of their financial and existential future is being resolved somewhere far away, off stage.

From beige in the first act to black in the second and finishing in white, the costumes designed by Doris Kristić (who also did the costumes for Popovski’s The Idiot) are true candy for the eyes, with their numerous details and the evident care sewn into them. While intended to give a historically precise impression, in their colourings, they faithfully follow the plot and the emotional atmosphere of the play and like most of the stuff which can be said about Popovski’s interpretation of Chekhov, they are always on point.

ZKM has a rightful reputation for the quality of its acting talent. While many of the cast of Popovski’s The Idiot, have now gone, the actors here once again stand out. The young duo Korani and Svrtan are both accomplished in their roles with Svrtan in particular a master of comic physicality. The old hands like Doris Šarić Kukuljica, who here appears in the episodical role of Charlotta Ivanovna, even with her small amount of her stage time, manages to vivify in the role of Charlotta, the literary and metaphorically magical interloper who doesn’t seem to fit the society’s ladder. 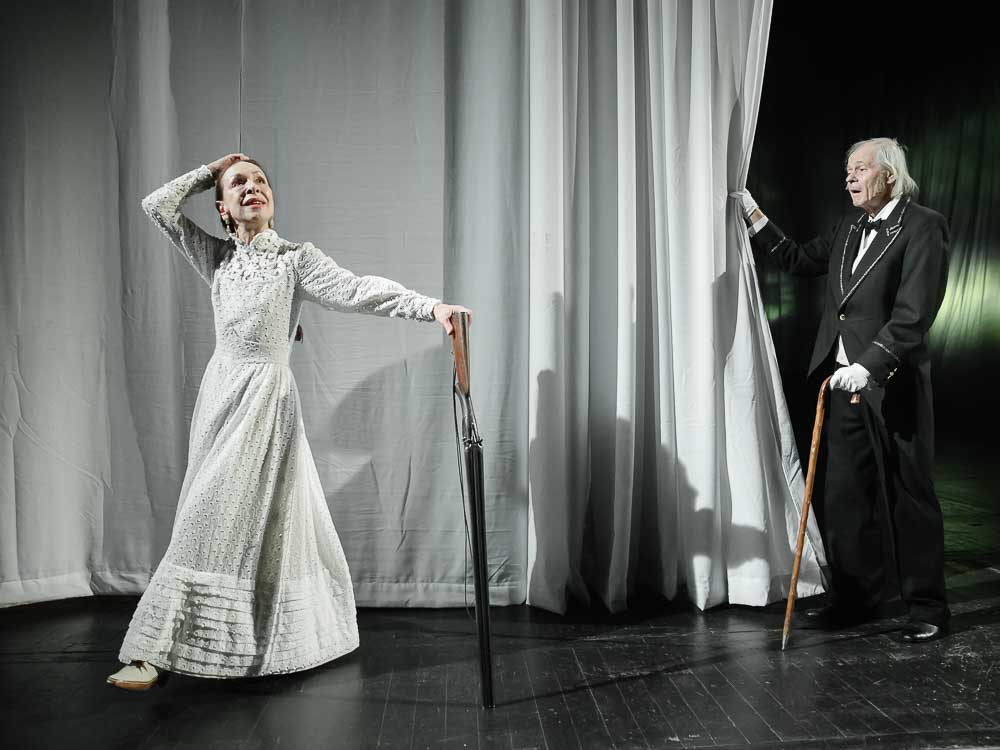 Also superb are Bistrović Darvaš and Nola as the heads of the slowly succumbing Russian aristocratic class while Rakan Rushaidat plays to his strengths, depicting the internal disturbance and way of thinking of characters like eternal student Peter Trofimov.

It is hard to imagine Popovski being able to make such a cohesive show anywhere else in Zagreb. ZKM has once again proven it can stage classics like The Cherry Orchard in a way that will delight both the more demanding audience members as well as those who are not regulars in the theatre. With the luxurious, historical costumes and striking stage design – with those big white sheets and a floating piano that you know will at some point fall to the ground – it works wonders in its grandiose minimalism. The classical and ethno musical numbers and the skill of the acting ensemble are a force to be reckoned with. This Cherry Orchard is a spectacle in every sense of the word.

While it is hard to find a fault in this staging, it does raise certain questions. More and more it seems, Zagreb Youth Theatre has taken on the responsibility of delivering classics on stage, in a manner which is more than respectful to their status. Even though it is always a privilege to watch these classics being given the treatment they deserve, the question remains – is this what the Zagreb Youth Theatre is supposed to be doing? Or is it perhaps time to reconsider what the Youth in the theatre’s name stands for? This is just something to ponder, but in the meantime, it is wonderful to have a staging of Chekhov that shows his true nature – as a comedian. 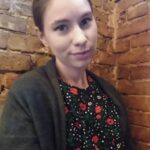 + posts
Lucija Klarić is a dramaturg and writer based in Zagreb with a passion for games and game-like things. She writes plays of which some were rewarded and had concert readings and has co-written screenplays for kids for the National Croatian Television. Her interests are also hybrid works with an interactive element. Regularly writes film reviews and occasionally, theater ones.
Category: ReviewsBy Lucija KlarikJanuary 10, 2023
Tags: croatia