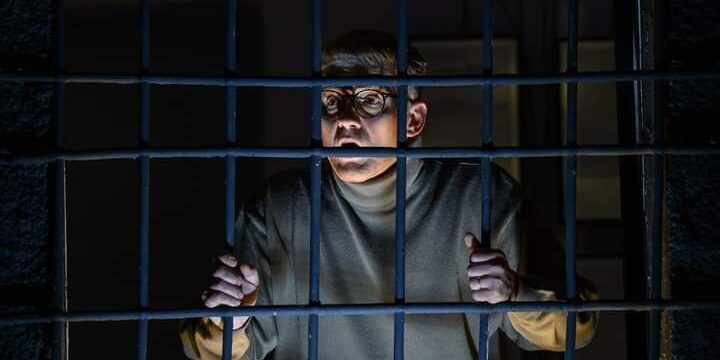 “Out beyond ideas of wrongdoing and right-doing, there is a field. I will meet you there”, Mawlana Rumi

In Albanian, Çimka (bug) is a broad term for an insect that lives as a parasite in the cracks of rooms and home furnishings. The word Çimka was used in the Albanian communist dictatorship to refer to miniature recording microphones used to eavesdrop and identify the ‘internal enemy’. Due to their small size, these bugs were placed on various items such as tables, cigarette boards, picture frames, coats, folders, and so on.

The relationship with our communist past remains problematic – that is clear even in museums dedicated to that time period. Political prison camps have been forgotten, and there have been little attempts to turn them into memorials to totalitarianism terrors. Bunkart 1 and Bunkart 2, the army’s and interior ministry’s former anti-nuclear bunkers that have been transformed into museums, are little more than time capsules for that period. One woman I met at these museums said they sparked her nostalgia for the communist past, and for “the previous order”. According to rumours, the dictator’s residence will also soon be turned into a museum.

The play Çimka was staged at the premises of the National Museum of Secret Surveillance, also known as the ‘House with Leaves’. From the establishment of the communist dictatorship in 1944 until its collapse in 1991, this building, which was converted into a museum in 2017, operated as the secret headquarters of the Secret Service. The goal of this museum is to show how Albanians were subject to state surveillance. During the dictatorship, it was said that one out of every three Albanians was a state spy and no one knew how true it was, or how much state security had spread this as a rumour to terrorize its citizens.

This play, directed by Zana Hoxha and written by Shpetim Selmani, is a collaboration between the National Experimental Theater ‘Kujtim Spahivogl’ and Pristina’s Artpolis, featuring actors from both Kosovo and Albania. It is a site-responsive performance. The audience is separated into two groups: ‘Leaves’ and ‘Çimkas’, and the performance takes place in different spaces inside the building, as well as outside in the courtyard. The play takes the audience on a journey between two storylines that eventually converge.

One of the stories takes place in Kosovo, where the real-life rhapsodic singer Dervish Shaqa  and his friend Demush Neziri, also a rhapsodic singer, travl to Albania after being pursued by the Yugoslav UDB. The other story takes place in Albania, where a rebellious young woman called Musine (inspired by Albanian writer, politician and dissident Musine Kokalari) refuses to accept the system’s conventions and is eventually killed.

The play aims to pay homage to these two figures, as well as a third one, Edison Gjergo, an Albanian painter who was a victim of the totalitarian dictatorship. But the play as a whole feels unsatisfying. The problematic relationship that Albanian society has with its communist past is simplified more than it should be, by placing it in a black-and-white frame of good and evil, one in which everything communist is automatically bad and everything non-communist is automatically good. Decommunization – a process which Albanian society must pursue – is not the same thing as blind anti-communism. 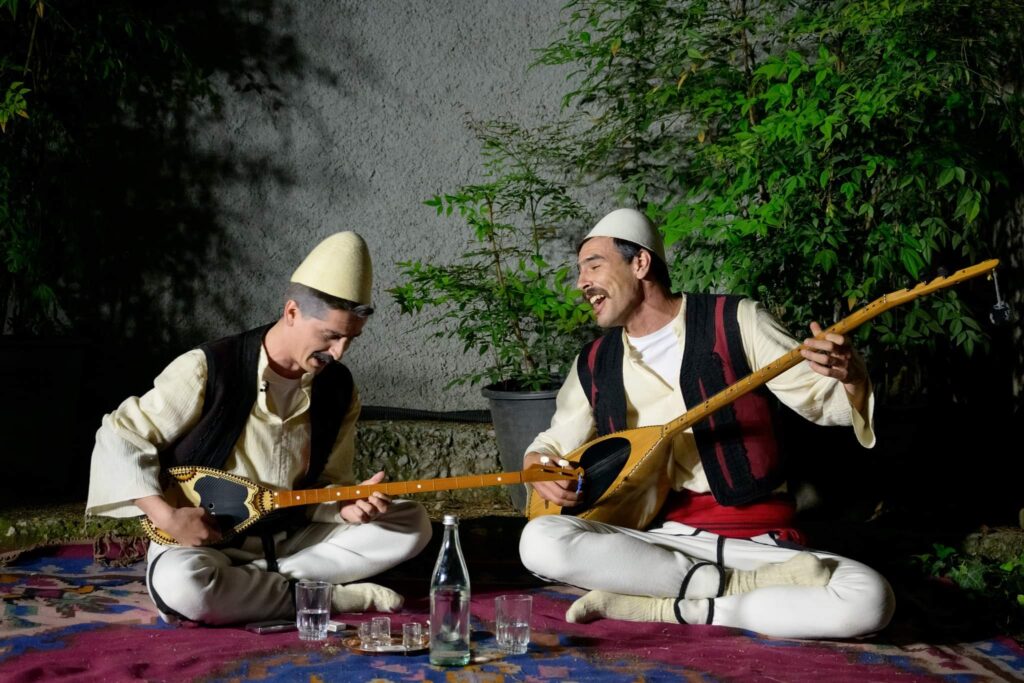 Many scenes feel incomplete. Despite the good efforts of Myzafer Zifla, who plays the investigator, one of the first scenes, set inside one of the rooms of the ‘house of leaves’, in which he interrogates someone (played by the boy who was guiding us during the show), seemed unreal. It was unable to create the tension that we were presumably supposed to feel.

The scenes in Kosovo can be easily distilled: Dervish is wanted by the UDB, so he flees to Albania; everything else feels like unnecessary filler. Musine’s character has similarly been reduced to a typical adolescent who argues with her parents about lunch. She asks them for new shoes, to which her father (Lulzim Zeqja) responds: “You have new shoes, you bought those just three years ago”.  This is a way of depicting the poverty that seized Albania during the communist totalitarian regime, but it has been exaggerated and simplified to the point where it ignores all of the true issues. Though complex concepts are haphazardly sprinkled throughout the play, much of the dialogue about art and the truth of art do not clarify the issues being explored.

Eventually, the two separate stories merge: Musine and her friend end up in the military wing, while the two men from Kosovo cross the border into the Albanian mountains. The climax sees them finally meet.

But for Musine Kokalari and Dervish Shaqa, the two real people on which the main characters are based, to suddenly meet in this way appears strange. It also remains unclear why they would embark on a love story in this play.

Shpetim Selmani’s play addresses the lack of communication between Albanians from the homeland and those outside its borders, a lack of communication that has persisted for 45 years and still makes it difficult for us to communicate with one another. (Though, ironically, the culture ministers of our two countries chose to see the show together).

And the play’s final act brings to mind the imagery from communist movies, in which the hero, usually a virtuous and dedicated partisan, is killed by the Nazi-fascist occupier as gunfire rings out (this is also how the communists created state martyrs). But, in this case, the roles have been reversed, and it is Musine who is killed by communists while dancing (possibly to signify her freedom). 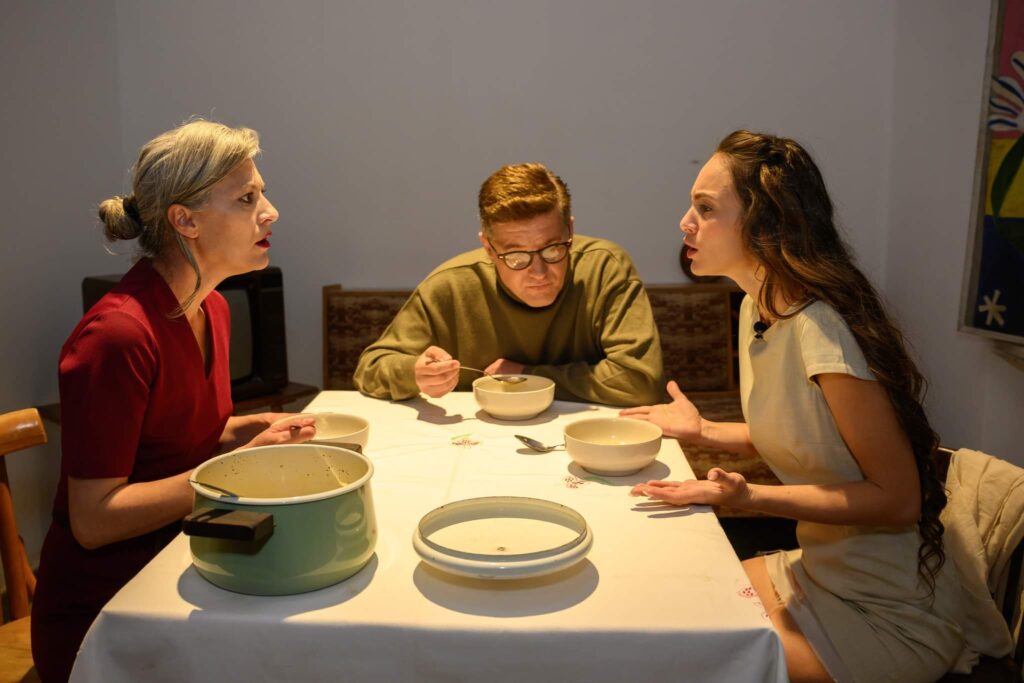 Ultimately, Çimka tries to take on more than it can handle. It tries to address wiretapping, totalitarianism, lack of artistic and individual freedom, economic, artistic and spiritual poverty, fear and submission, and the lack of communication between Albania and Kosovo. It seeks to pay homages to several people at once. But all of these concepts appear to be stuck together – the play is like a small vase filled with too many flowers.

Personally, I believe that Dervish Shaqa was a good man who was a patriot rather than a communist, but he was utilized by the communist dictatorship. The fact that he was a rhapsodist from Kosovo who sang about bravery and Kosovo was used by the communists in Albania for patriotic propaganda, blinding the people to the truth that Albanians overseas were left at the mercy of fate and the Yugoslav UDB.

On the other hand, figures like Musine Kokalari can provide us with much more than just the image of a rebellious girl who rejects the system’s rules. If we read Musine’s diaries, which she kept until her death while living inside a barracks and working as a street sweeper (even though she had finished her doctorate with a thesis on the Albanian national poet Naim Frasheri), we will not find within those pages hatred for anyone, not even for her persecutors.

In the end, the more we know about people like Musine Kokalari, the more they show us how to live with dignity, even in a society that doesn’t allow for this.