You are here:
Albania
Interview 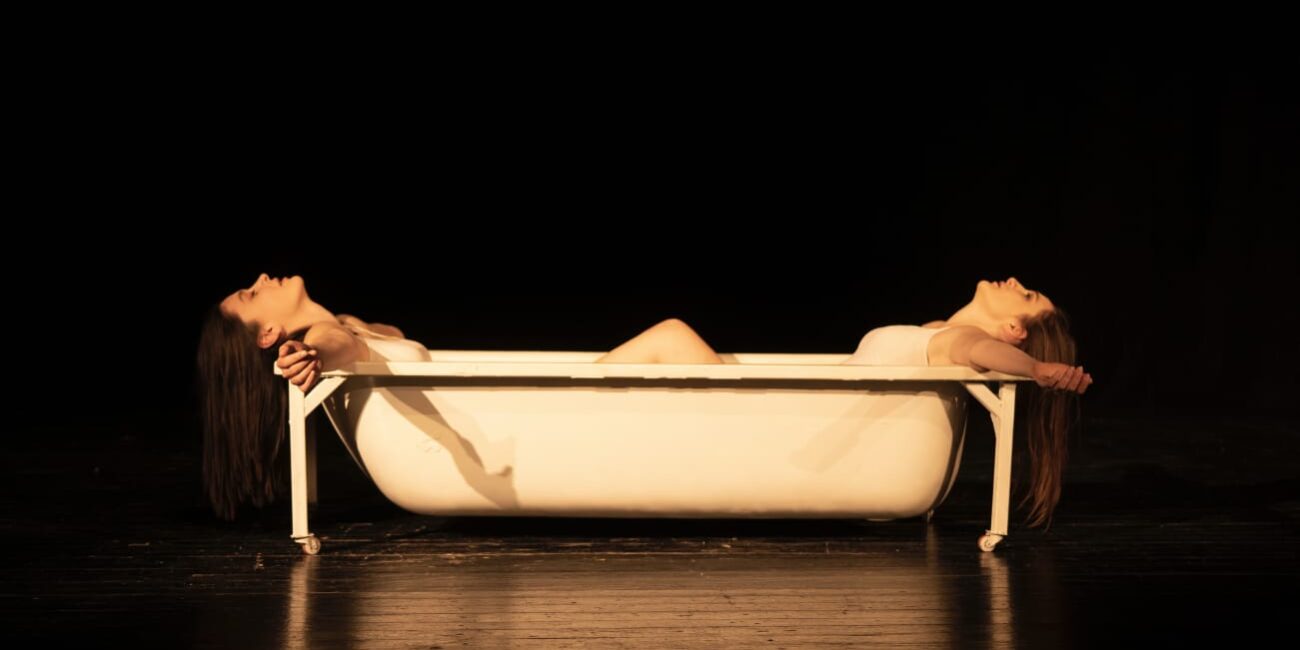 Directed by Klaudia Piroli, Pa Ze, a play about a young woman who finds out that her mother has died, was originally staged in Toronto in 2015, under the title Mouthpiece. Flamur  Dardeshi talked to Piroli and the performers Vlera Pylla and Enisa Hysa, about feminism and what it is to be voiceless.

Staged at the National Experimental Theater “Kujtim Spahivogli” in Tirana, Pa Ze has only one character, Casandra, a woman dealing with her mother’s death. Vlera Pylla and Enisa Hysa both play Cassandra and are constantly on stage together as two sides of the same coin.

The play, by Canadian performers Amy Nostbakken and Norah Sadava, shows how Cassandra’s mother lived her life in a patriarchal culture where she was expected to be perfect and, in response to societal gender inequity, Cassandra has built a persona that is the polar opposite of her mother, and asks how easy is it to live with this “duality”?

Flamur Dardeshi: How did you first come across this play, Mouthpiece?

Klaudia Piroli: Altin Basha, the director of National Experimental Theater ‘Kujtim Spahivogli’ handed me the text and asked me to consider staging it. After reading the play, my first feeling was that I wished I had written it, and I was thrilled to stage it.

Flamur Dardeshi: What piqued your interest in bringing this play to life?

Klaudia Piroli: I believe that theatre should always have a mission, rather than simply to [be about] performing a play or a written text. There has to be a purpose for why I want to stage this play now, in this reality. And I liked the play because it centred on the modern woman, the woman we see every day in the city, who appears calm and cheerful on the outside but struggles internally. And the main struggle that Cassandra, her mother, and many other women face is being obliged to repress many of their feelings and thoughts.

Flamur Dardeshi: Klaudia, you have presented your past shows in alternative spaces. How was your first experience inside a theatre institution?

Klaudia Piroli: This is my sixth show; the last five were held in alternate spaces. Everything went really well at the Experimental Theatre, which makes me very happy.
However, it was not easy because the audience was accustomed to seeing shows with costumes and musical elements. The public is unaccustomed to alternative shows, which makes my work difficult. There were a few spectators. People here come to the theatre to laugh and have a good time; they are not looking for shocking performances. “Why do you use such dirty language?” someone asked me. When two young women expose some truth on stage, it is difficult for people to accept it.

Flamur Dardeshi: In this show, the same character is played by two actresses. What was this like to perform?

Vlera Pylla: The work was challenging. When a project runs into difficulties, it becomes more appealing and advantageous to an actress. It was also beneficial because the final product was beautiful. Being able to interpret in such a fantastic drama is, in my opinion, a wonderful stroke of luck for an actress.

Enisa Hysa: Working in a piece like this is a great chance, and it would be even more difficult if the two actresses were completely unconnected or if there was just one actress on stage. It was both beneficial and challenging, in my opinion.

Flamur Dardeshi: The play was written by two actresses-choreographers who also
performed it on stage. Were there any parallel between Cassandra’s relationship with her mother and yours with your mothers?

Enisa Hysa: I’ve heard the writers’ interviews, and they’ve been asked similar questions such as “Are there any personal details from your life in this text?” to which they replied, “This text is our reality.” They had been working on the text for months. They claimed that they would accept a piece of what they were writing only if they were certain that it was the plain truth, not something fancy. The mother-daughter relationship is one of the show’s key themes, and it has had similarities with our lives as well.

Vlera Pylla: When I initially read the text, I thought it was fascinating how the authors viewed Cassandra’s relationship with her mother and how she found herself in her life. After that, the statement “all women become like their mothers” came to mind, and I realized that is true.

Indeed, we women are profoundly affected by what we see. When faced with the most difficult decisions, we realize that we make the same choices that our mothers did. I reflected on myself while working on this piece, and every conversation we had throughout rehearsals or preparation for the show began with us. We also gained a better understanding of ourselves and our relationship with our mothers. 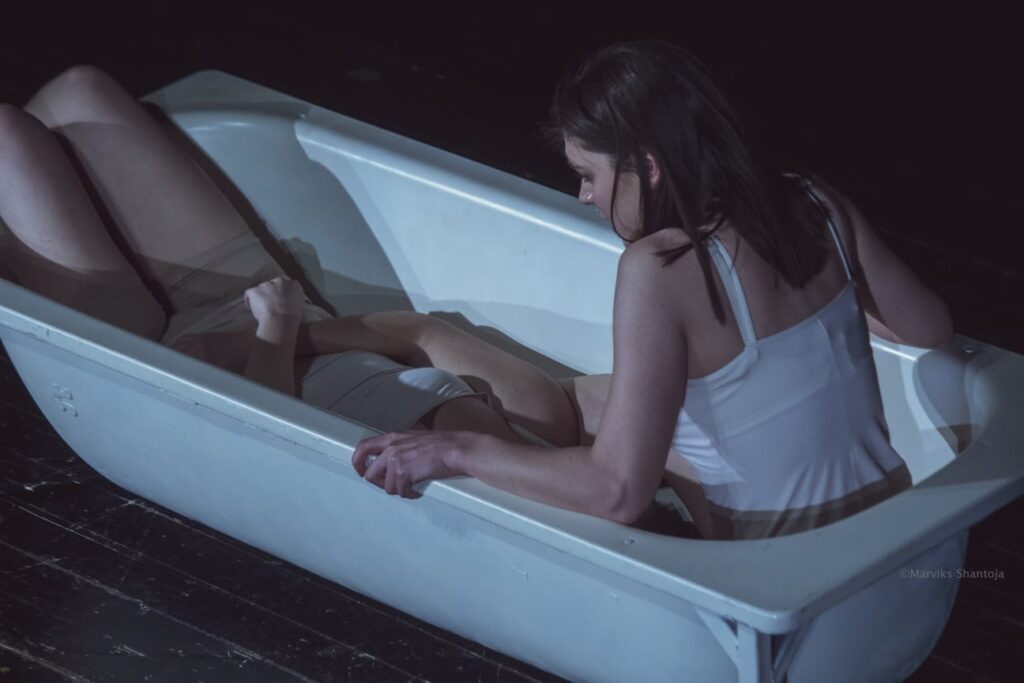 Flamur Dardeshi: What reaction did the audience have to the show?

Vlera Pylla: I cannot know for sure. We wished for more male spectators, but that did not happen. Most of the men did not like the play. “You girls were very good, but why this text?” Girls, however, they applauded endlessly.

Klaudia Piroli: A woman said to me “I found myself in this story, it was my life in this”

Vlera Pylla: Many women have told me “I am Cassandra.”

Flamur Dardeshi:  What is the relationship between Albanian theatre and modern and feminist theatre, in your opinion? And how are woman portrayed in the theatre?

Enisa Hysa: It’s not that feminist works haven’t been staged before; they have been for many years. The issue is how much they are absorbed by society and how much changes it. I’m not sure if anything has changed.

Klaudia Piroli: Not only on stage, at work in the theater I think actresses are very intimidated. Women, in any profession, are very intimidated. It is different for an actress who is married, has a child, and it is different for an actor who is married and has a child. Her attention is focused on many other things, she is not completely focused on the profession.

Flamur Dardeshi: The title of the show is Mouthpiece in English, which means to give voice, while in Albanian is brought Pa Zë, which means without voice.

Klaudia Piroli: The play was not translated by me, I just adapted the title to Pa zë because it has a negative connotation; there is nothing, there is no voice. Women struggle to have a voice. I talked to the authors and proposed this title and they agreed to it.

Flamur Dardeshi: Are you without a voice?

Flamur Dardeshi: What about Kosovo, is it different? Do women in Kosovo have more voice?

Vlera Pylla: It’s the same. Perhaps I am [wrong], but it appears to me that they are even more ‘voiceless’ in Kosovo than they are here. Albanian women, in my opinion, are not allowed to have a voice and must learn to live without one. Even if they have a voice within their heads, they are taught to silence themselves in order to be accepted in society. 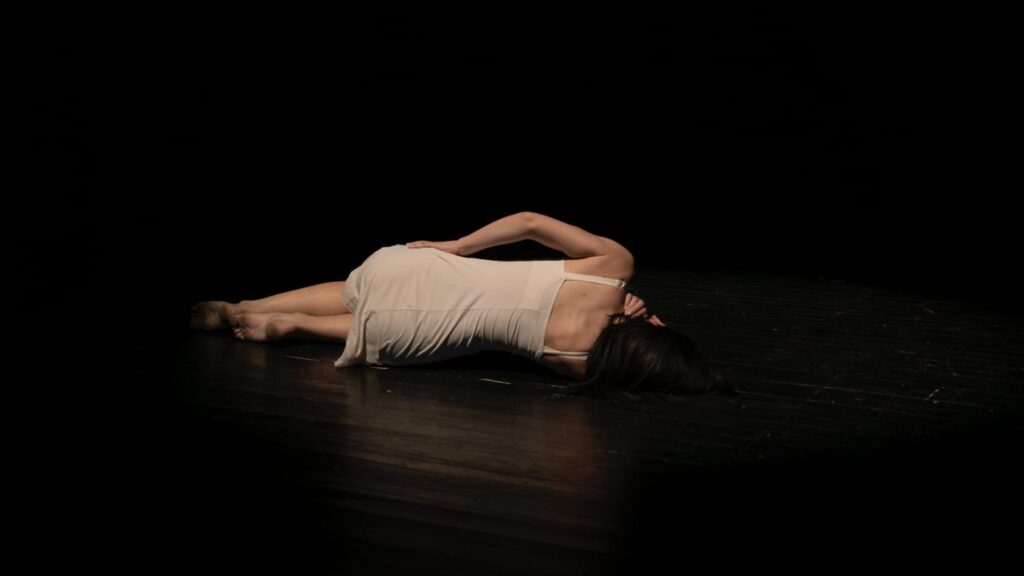 Flamur Dardeshi: What is feminism in your opinion?

Vlera Pylla: The need for feminism is born with the idea of being equal, because we live in an unequal world. We are actresses and we are doing a profession that maybe makes us bolder and freer, but in fact we are not. We are not at all, we even become more inhibited when we choose this profession. I’m more inhibited just being an actress. Because we are actresses, we are prejudiced by our own artists and colleagues.

Feminism was born as a need of women to be heard and to be equal to men. And, we need to raise the voice for feminism to achieve equality with the man. That is why my favourite scene in the drama is the one with the fairy tales. Why do girls grow up with the dream of being a princess? As a younger generation, our children who will grow up to be more equal, both girls and boys.

Enisa Hysa: Feminism, in my opinion, is the rejection of gender stereotypes. There are many stereotypes, both global and local; even colours are divided into blue for boys and pink for girls.

Klaudia Piroli: For me feminism means to speak. I’ve wanted to speak since I was a child, I wanted to speak and I often encountered difficulties and I was forbidden to speak. When it comes to feminism, I believe we can all rely on our mothers. The way they’ve portrayed the role of a woman in this male-dominated culture. They gave up their lives to complete this task since it was so important to them. For example, I recall my mother always encouraging me as a child to study and attend college so that one day I would be more independent and free. Because there are many girls who wake up without a voice, without a shape, who are unable to communicate, articulate, or speak because we live in a world where you are not free and independent. Many girls would be happier and more fulfilled today if they were here having this talk.

Flamur Dardeshi:  There is a story about potatoes in the play that is interesting. Cassandra’s mother never ordered potatoes in a restaurant, whereas Cassandra orders potatoes even though she dislikes them, to show others that she was not interested in being a “lady”. As a result, we have a Cassandra who opposes her mother. Is feminism also a reaction to the mother, her notion, image, and the way she has restrained herself? What should women’s relationship with potatoes be like?

Klaudia Piroli: Cassandra is a rebel; she orders the potatoes despite her dislike for them. In some ways, she, like her mother, is doing it for others. When you are not free you have neither identity nor personality, nothing. If I am not free, I will never know who I am; I will be a woman without identity, form, or personality. As a result, we must fight for our freedom.

Further reading: Ema Andrea: “Freedom is not something that is given to you, it is something you fight for.”

Sasha Milavic Davies: “The audience were on the verge of rioting”
November 13, 2022
Most read articles
Most used Tags