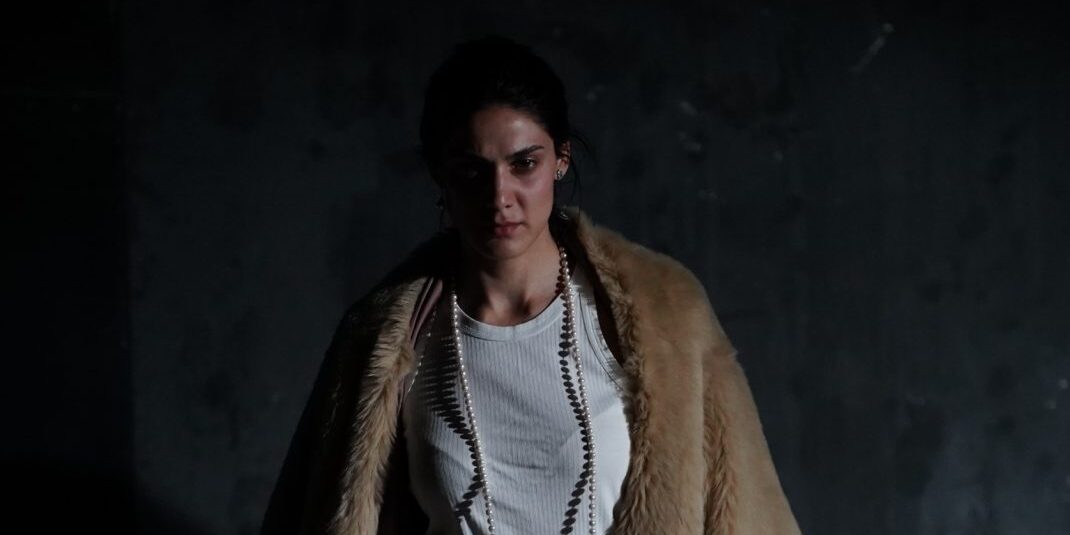 There’s a reason why Sophocles’ Antigone is continually being reworked and revisited. Its protagonist remains one of the great female characters. Antigone defies authority to give her dead brother, Polynices, the burial he has been denied. She refuses to be cowed or to apologise. She is willing to give her life for what she believes is right. She is also single-minded to the point of recklessness and won’t let anyone dissuade her, even her own sister.

It feels superficially fitting that, in this production by Slovenian director Diego de Brea, Antigone is played by two actors – Dunja Stojanović and Jana Milosavljević. It’s a way of giving her internal turmoil external form. But her double presence on stage also accentuates this production’s muddled approach to gender and power.

De Brea places Sophocles’ play in a contemporary setting. The staging is spare, the back wall of the theatre visible and a projection has been screen suspended from above on which video is projected. It has the feel of a hip art gallery. Antigone has a smart phone in her handbag. We hear traffic noise in the background.

Antigone is costumed in glamorous black – black pleated skirt and bustier, teetering heels. When she sits on a chair her pose is not demure, rather she sits with her legs slightly spread, one foot propped up, a woman who is comfortable taking up space. Her sister Ismene (Mina Nenadović), in contrast, wears frilled white ankle socks and a pristine white coat. It presents us with two starkly different images of femininity. The actors transcend this intentionally reductive view of womanhood. Stojanović, in particular, is a magnetic performer, conveying the depth of Antigone’s pain; on hearing of the death of her brother, she falls to her knees, she pounds both the ground and her own body, taking her grief out on herself. Milosavljević is also compelling. However, de Brea’s production feels in conflict with itself, perpetrating some of things it appears to be critiquing.

Antigone is, at its core a play, about power and the production attempts to explore this in a post MeToo context. Repeatedly we see the male characters abusing their power, menacing and intimidating women, slowly unbuttoning the coat of a trembling and terrified Ismene. But there’s an uneasy tension between the way these scenes are presented and the way the audience is invited to look at Antigone (both versions). She looks ready for a Vogue photoshoot at all times, even when wearing her black mourning veil. I also remain unconvinced  that the best way to represent a woman’s vulnerability is to have an actor stand before us quivering in her underwear. Very often male directors seem to feel that the best way to explore misogyny is to depict it, without thinking deeply about the implications of this. There are several moments when it feels as if it’s not interrogating problematic tropes so much as indulging them. 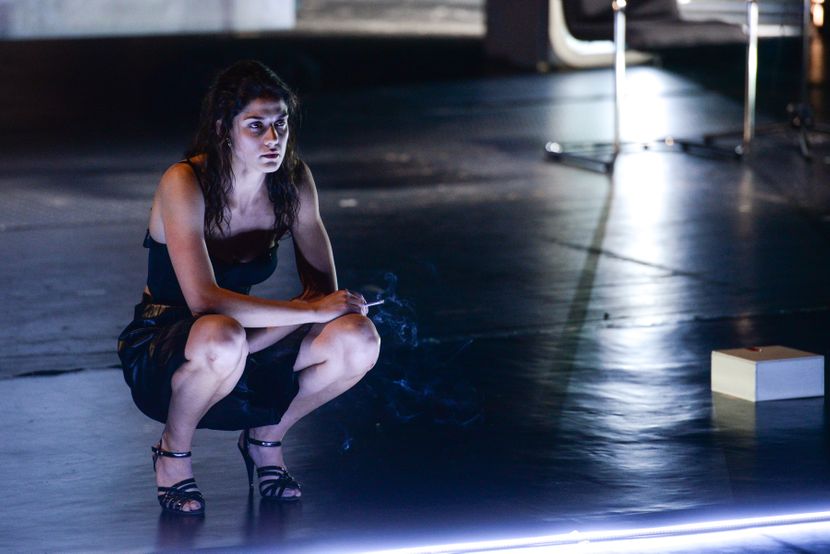 Pavle Pekić, with his sonorous orator’s voice, plays Creon, King of Thebes, with the casual arrogance of the autocrat. Clad in vaguely papal robes, he is aloof and callous, he is a man accustomed to being obeyed, commanding, in every sense, and utterly unbending. He puts the needs of the state above all else and is willing to override the gods. Pekić is the kind of actor who feels very present on stage even when sitting still. He is deeply imposing, yet he also imbues Creon him with flashes of humanity. This is particularly true after the self-inflicted death of his son Haemon, played here by Luka Grbic (the young star of Shakespeare in Love at the same theatre).

Haemon is shown shooting himself. The production also includes repeated video imagery of suicide. In filmed dream sequences, we see Antigone hang herself (while wearing high heels, underwear and pearls). We see her shoot herself. We see her face streaked with blood. We see her dead body on the mortuary table, soaking wet, the ligature marks visible on her neck. Quite apart from the fact that depicting suicide in this aestheticized way is discouraged by mental health organisations, it once again feels like the production is overly fixating on Antigone’s beautiful body

De Brea is clearly a director interested in looking. Polynices is represented as a painting (I wasn’t close enough to see if it was Holbein’s The Body of the Dead Christ in the Tomb, but it’s what it reminded me of) which is elevated above the stage in a box, as if trapped between realms. Antigone takes Polaroids of herself and hands them to the audience. The idea that this is a gallery, that theatre are spaces in which we look at things we find appealing is borne out. But, even given the episodic nature of the text, the pacing feels sluggish in places

The final moments frame Antigone’s act of sacrifice as one of strength and resistance, an act that will have consequences, but once again she/they are shown in their underwear, breasts covered by crimson tit tape, still in high heels. It feels like the production is struggling to say something about empowerment and disempowerment. It also kind of feels like an excuse to put attractive women on stage in their knickers. It sours the final scene and undermines the strong work of the two leads.

Further reading: Review of Shakespeare in Love at BDP