You are here:
Germany
Reviews 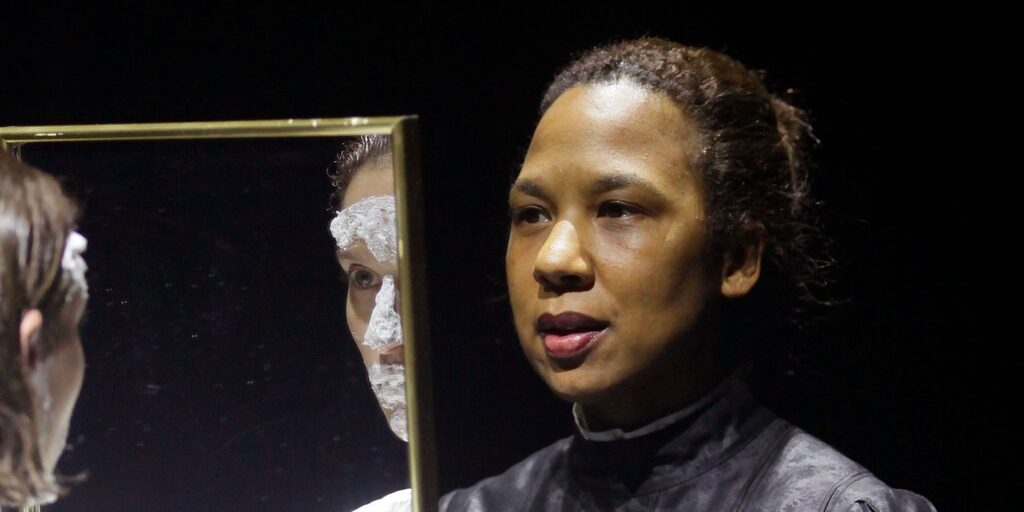 Oliver Frljić is a director who regularly sinks his teeth into the hand that feeds him. His work for the Maxim Gorki Theatre in Berlin frequently interrogates that theatre’s artistic policy of centring migrant stories and migrant performers.

The rules designed to limit the spread of Covid-19, while restrictive, also forces artists to explore new forms and to rethink the relationship with the buildings in which they operate, the performance spilling into parts of the building normally off-limits to audiences as well as into the digital realm. That’s the case here. Premiering last summer, when in-person performance in Germany was still subject to restrictions, Alles Unter Kontrolle is an Oliver Frljić promenade performance. Designed to be viewed by small groups of masked audience members, the show consists of a series of scenes performed by actors in different spaces around the Maxim Gorki building. The audience are separated from the performers by Perspex corridors.

The show takes its inspiration from Walter Benjamin’s assertion that “the tradition of the oppressed teaches us that the ›state of emergency‹ in which we live is not the exception but the rule. We must arrive at a conception of history that is in keeping with this insight.” The first scene features an actor pacing around in a satin skirt and talking furiously about the idea of the ‘state of emergency’ throughout history from Napoleon via the Second World War and 9/11, up to, inevitably, the current pandemic, and the erosion of democracy and human rights that often run concurrently with such events.  It’s an intensely physical performance; he doesn’t stop moving or speaking as he delivers this whirlwind of words.

While this mode of performance – volatile, confrontational, edged with irony – feels in keeping with Frljić’s past work, the next scene is markedly different. Two people sit at a table, one questioning the other.  One of them, the performer Maryam Abu Khaled is forced to answer questions about her past experiences at the Freedom Theatre in the Palestinian refugee camp in Jenin. Her interrogator charges her with the “theatrical crime” of “trying to be yourself on stage.” (Khaled’s biography echoes that of the character she is playing).  This is, he says, a clear violation of the law of representation. Her response: “Theatre is the only place I could live the illusion that I was a human being.”

The next scene is wordless. Two women – one black, one white– enact a scene in which the black woman (Abak Safaei-Rad), dressed in period costume, serves the white woman (Lea Draeger) a glass of milk and then, having done so, commits an act of violence against her. Both acts are performed slowly and gracefully, with Draeger collapsing to the ground as if in slow motion, to a soundtrack of classical music.

After this, we switch to the performer Kinan Hmeidan, who uses cardboard cut-outs – including one of the Gorki Theatre – to tell the story of his journey from Damascus to Berlin, with an interlude at the Munich Kammerspiele. It’s the most overtly funny sequence of the show but one that once again probes the Gorki’s motives for turning “lucrative humanitarian disasters” into products for western arts markets.

Plastic sheeting is laid out on the floor for the next sequence – always a concern in a Frljić production, as you know it’s likely to smeared with some form of fluid or edible matter before the show is out. In this case it’s Schokokuss, a German sweet treat that once was also know by another, more offensive term. This is catalyst for another silent exchange on power, race and identity played out by the two women from the earlier scene.

These themes are further unpacked in the following scene, though the tone – once again – is completely different. We’re told that this is scene has been directed by Frljić’s assistant on this project, who is both female and from Colombia – a country whose ongoing conflict is often downplayed or absent from western headlines. The performers, who are also female, have a conversation about zombies, but it is really a conversation about control – and power. If a male director – one of theatre’s many “white male arseholes” – gives female creatives a platform does this undercut their agency? If he puts words in their mouth, does this dilute the power of their presence on stage? What if turns out Frljić’ wrote this scene too? Does that nullify what it’s trying to say?

In the final scene we are in a kitchen where a man in an apron talks us through the previous scenes, the ingredients that made up this particular performance, dissecting everything we have just seen and either voicing the thoughts of some of the audience members or planting seeds of disquiet in the minds of others.

The use of plastic corridors to navigate the space makes the performers – and at times the audience – resemble exhibits. The audience members can also see each other, they can watch the other watchers in their beaked N95 masks; they are more than usually aware of their role as onlookers, which is exactly what Frljić wants. He wants people to feel a degree of unease and tension; as is often the case with his work, it constantly anticipates and articulates any criticism they may have about what they are watching.

The piece’s key theme, its central emergency, is one of representation: who decides who gets to speak and in what context? Where does the line lie between empowerment and exploitation? Is the act of ‘giving someone a voice’, still one of inherent power imbalance? Is this whole exercise an example of the white gaze in action? Are we – the, it is presumed, non-migrant audience – being invited to watch migrants perform their stories so that we can give ourselves a pat on the back afterwards?

There’s a paradox in much of Frljić’s work, in that its relentless self-critique –at one point, the soothing narrator raises the question about the white gaze – on the one hand diffuses criticism but at the same time it can feel like a way of sanctioning its own more ‘problematic’ aspects. Actors frequently appear to break from the script to berate the director for saddling them with such contentious material. Here the implication is that this show mining its actors’ lives, but that it’s not alone in doing so – there’s a whole wave of western theatre that does this.

It’s exciting to see what results when Frljić is forced to work within a set of restrictions, but there are some habits he can’t shake.

Alles Unter Kontrolle will be streamed on 11th February 2022