Olga Dimitrijević: “It’s impossible to do this job without falling into a trap”

You are here:
serbia
Interview 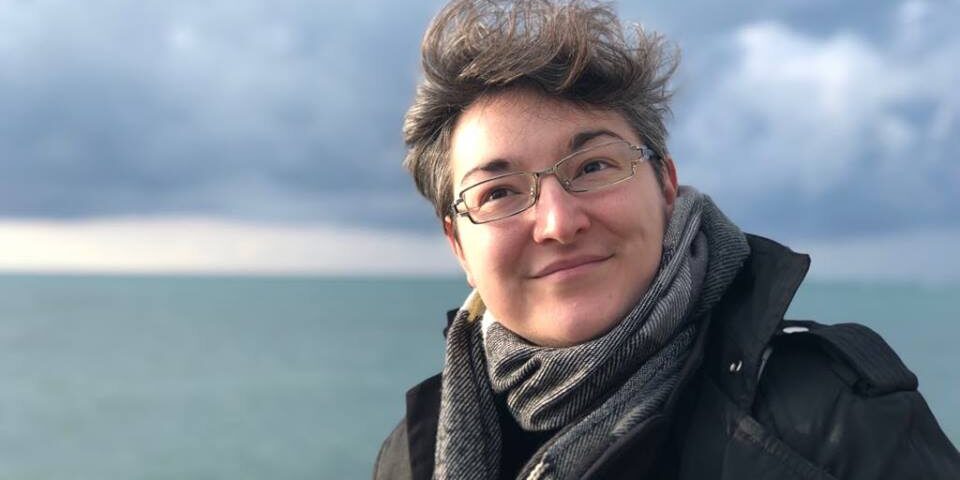 Olga Dimitrijević is a playwright, dramaturg and performer whose most recent show World Without Women explored conditions for female artists in Serbia. She talks to Natasha Tripney about structural inequalities in theatre and imagining the end of capitalism.

Natasha Tripney: Your latest show World Without Women, made with Maja Pelević, started with a presentation of data about the position of women in the Serbian theatre scene. What prompted you to carry out this research?

Olga Dimitrijević: As we said in the show, we were sitting and having coffee one day and talking about how someone had said there is this huge problem with the lack of female directors and authors in European theatre. We thought the situation must be better here, because there are some very strong women voices, both in the field of writing and direction, but nobody had ever taken a good look at the numbers.

We got the idea to see how it really is, to see what’s the situation is really like. We looked at the repertoires of the biggest theatres in the country – and then we started laughing, because it was very clear, both that the situation is not equal at all, and that the distribution that exists in relation to gender and money is just insane, that work by men was often on the bigger stages, where there is a much bigger budget. We decided to make something more systematic about this. To make a show about this. Why not? It had been a while since we last made a show together and, having glimpsed this inequality, we decided to dig deeper.

Natasha Tripney: How did you go about that? What research did you do?

Olga Dimitrijević: We knew from the beginning that focusing only on the on the numbers, on the position of women, would not be enough, because there are so many issues underlying the issues of women and theatre. The numbers are only the tip of the iceberg. We said: for the beginning, let’s talk about quotas. Let’s ask all the managers when and if they will introduce quota. Let’s start from that perspective. But, then, we wanted to go beyond mere liberal feminist perspective, and to bring in the issues of class and labor, according to our political background. The logical next step was to ask who has access to the theatre at all? What is it like to work in the theatre as a woman? What kind of discrimination is there, not only in the terms of access to work, but the actual structural violence that occurs in the theatre process and, of course, in capitalist societies. 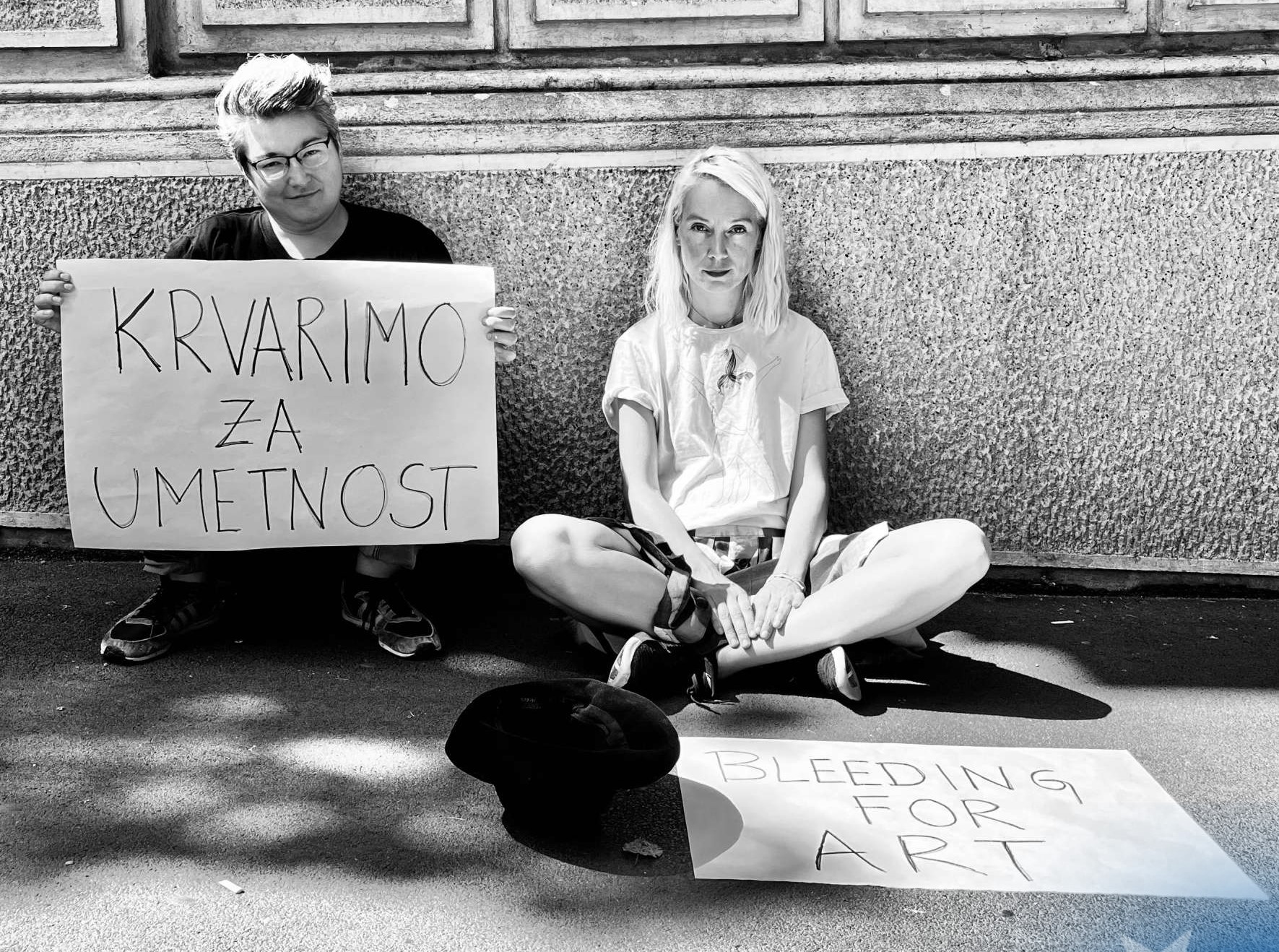 World Without Women at BITEF

Natasha Tripney: One of things I found resonant about this show was the way it explores how artists – particularly female artists – get trapped in a cycle of self-exploitation.

Olga Dimitrijević: It’s impossible to do this job without falling into a trap. The exploitation for women is even stronger because we tend to work more and be paid less. We wanted to reflect this in the show, caught between being involved and at the same time wanting to get out of it, stuck like a hamster running in its wheel. On the one hand, we have this very thorough analysis of the position of women in the arts workforce, but on the other hand it’s impossible to reduce what we do to the sheer notion of work. There is this kind of tension – at the same time as we try to get out of this thing, we are digging ourselves deeper.

Natasha Tripney: At the end of the show, you seem to conclude there is no solution, to stop fighting, and perhaps even stop making work

Olga Dimitrijević: At the end of the show, we talk about the possibility of going on strike, but the structure is such there is no way out. So we tried to open up the space instead, to reimagine a way of us being together on the stage. A friend of mine who is theatre director told me, after she saw the show, that she completely identified with the point we were making, but she left the show with the feeling that she wanted to make theatre more now than ever. I think she captured the kind of frictional problem that exists.

Natasha Tripney: A lot of your work seems to be made as part of a collective – can you tell me a bit about this model and how it works.

Olga Dimitrijević: There are actually two different models and two different approaches when it comes to making work in this way. With The Lepa Brena Project, the collective text was the part of the concept of the show itself. We were not making a biopic where there was one player, instead there were many planners. The best way to do this was to have a multiplicity of voices. That’s how we imagined it from the beginning.

When it comes to something like Lonely Planet, which also includes five different monologues, this was another form of collective work. There were five of us and it was during Covid, so we said let’s see who wants to contribute work. It was a much more democratic process and a low-pressure project, because it came out of friendship, put of our personal relationships which enabled us to play around with the artistic form and way of writing.

And then, of course, when working with Maja, that’s probably my favourite way of working, with its complex dynamics, interplays, creation and fun that collective authorship and collaboration brings.

Natasha Tripney: You mentioned in the Remembering Yugoslavia podcast, that Lepa Brena came to see The Lepa Brena Project. What was that like?

Yes, she came to see it. That was one of the most exciting moments in the theatre that I ever experienced. The whole audience, including me, was watching two shows at the same time. One was happening on the stage, but the other one was playing in the audience. It was a very special moment in that sense.

I think that she liked the concept from the beginning. We got in touch with her two or three weeks before the premiere and scheduled a meeting. We didn’t want anything from her, expect maybe her blessing or something. But the moment when we told her the concept of the show and about the different Brenas, she started listening really carefully, and at the end of the day, she was very happy with the whole thing. She came to see the show several times.

Natasha Tripney: During the summer, I saw your Drama About the End of the World, which opened in the Botanical Gardens and told the story of the city’s trees. What motivated you to write this play?

Olga Dimitrijević: It came out of this perpetual, collective feeling that we’re living at the end of the world. This is something we’ve felt for a few years now, even before Covid, a feeling that is moving through the society and it’s getting stronger and stronger. On the one hand, it is connected to political and ideological situation in the whole world, with rising repression, surveillance and conservativism; and weak alternatives to dominant structures. And the same thing applies to Belgrade, as I am deeply affected by everyday injustices that are being performed on both the people and the trees of the city.

The play is not set in contemporary Belgrade but Belgrade six months from now, It’s not yet happening, but it’s very possible to imagine that it will happen. And as it used to be, as they say in the show, 80 years ago during the Second World War. So, that play came out of my desire to re-examine what does it mean to imagine the end of the world. Or, rather, the end of capitalism. 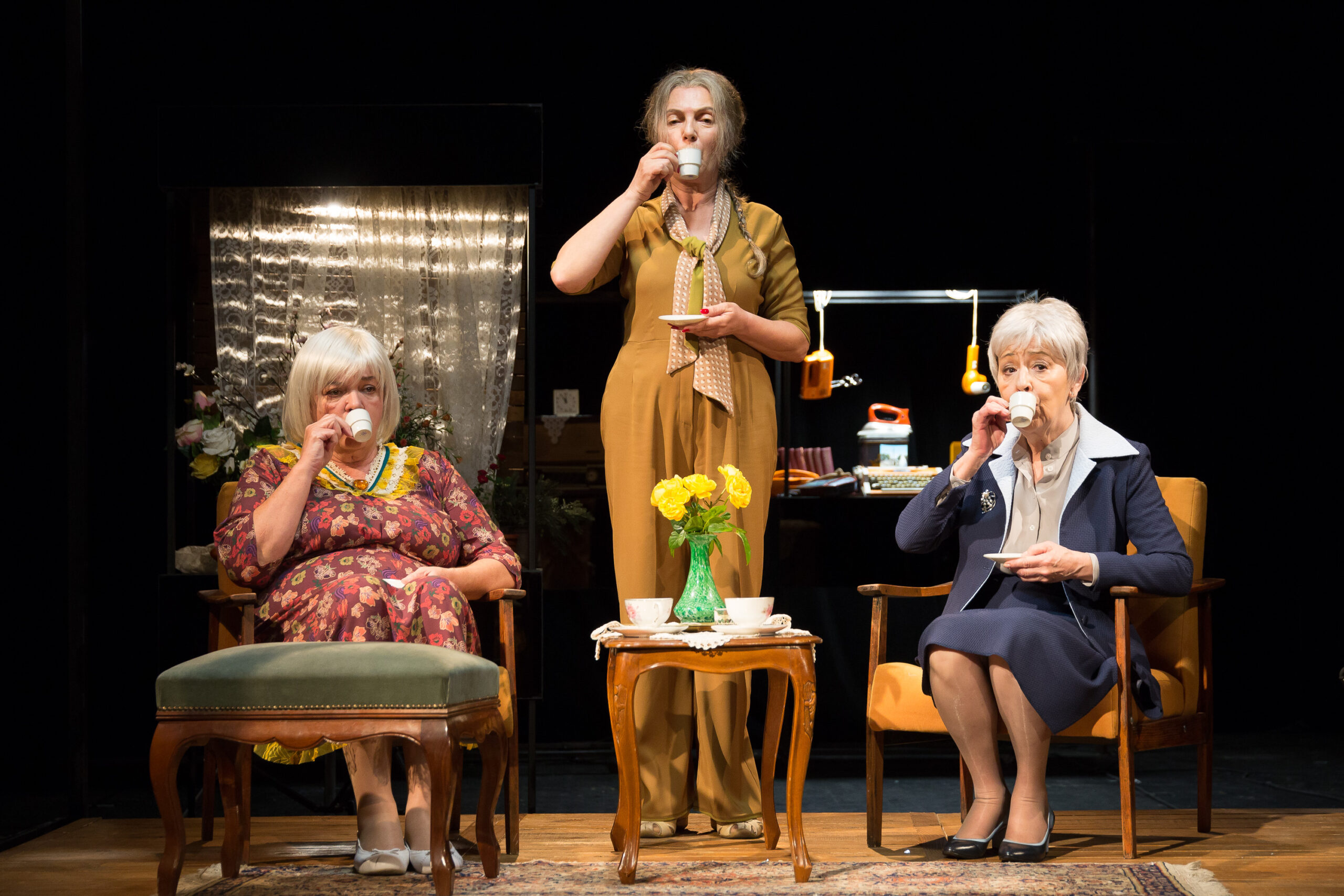 Natasha Tripney: Your play Moja Ti recently returned to the Atelje 212 repertoire. This play explores a number of themes including the emotional lives of older gay women, something rarely given space on stage.

It makes me insanely happy that it’s so successful. You really don’t have stories of older women on the stage. I was thinking about that, while writing it. You become afraid for your old age, about what will happen – will I go to the theatre when I’m 70 and only watch stories about 25 year olds? I don’t want that.

The audience also really wants to see the actresses [Serbian stage and screen stars Svetlana Bojković, Gorica Popović, Tatjana Bošković]. There is this correlation between you the lines the characters are saying about themselves – maybe we are old, but we are not ready to be thrown away – coming from the mouths of these big actresses. They have such popularity. And there is an overlap between theatre and life, which I think makes it so appealing. You could call [Moja Ti] lesbian Communist propaganda but still everybody loves it. I think that’s beautiful.

Natasha Tripney:  Why theatre? What drew you to performance in the beginning?

Olga Dimitrijević: I still think the theatre is the only art that potentially connects affects, analysis and politics in the most powerful way, and has the possibility to create intentional communities like no other. Probably that’s why I entered the theatre, and the reason why I’m not quitting yet, in spite of facing constant reproduction of all possible conservative patterns within the theatre itself.

Further reading: review of World Without Women and review of The Lepa Brena Project

Further reading: interview with Sasha Milavic Davies, director of Moja Ti: “The audience were on the verge of rioting”