The Return of The Prefect – reviving the past

You are here:
Albania
Features 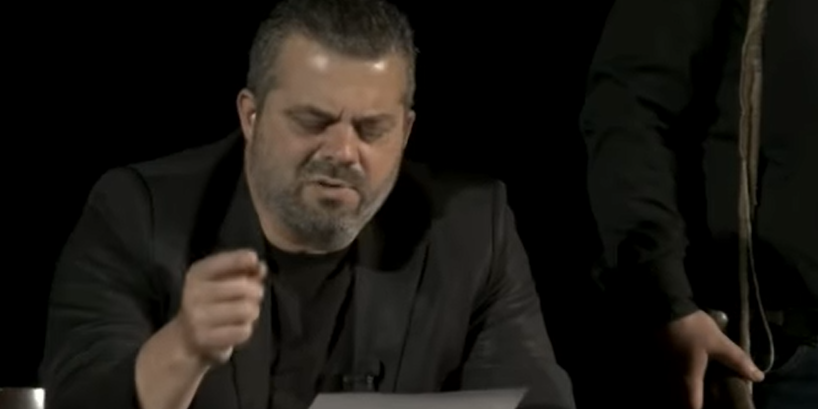 When the National Theatre of Albania decided to present an ‘artistic reading’ of Besim Levonja’s communist-era comedy Prefekti (The Prefect), some people were outraged. Flamur Dardeshi explores the controversy and what it says about Albania’s complicated relationship with its cultural history.

The announcement that the National Theatre of Albania was going to revive Besim Levonja’s comedy The Prefect on 28th November – the day of the declaration of independence of Albania- with an ‘artistic reading’ of the play was a source of controversy. Commentators opposing its return rushed in, labelling the National Theatre as neo-communists and propagandists of the class war, and the comedy as being worthless garbage that should be thrown in the dustbin of history rather than being revived.

Levonja’s comedy was staged for the first time in December 1949. It was followed by dozens of other revisions and was eventually filmed by Kinostudio Shqipëria e Re under the same title. It was one of the most popular theatre pieces of the time, and it was performed virtually every year until the dictatorship fell apart in 1990, so it is well-known to most Albanians. The comedy itself satirizes and mocks with the intention of denigration, Qazim Mulleti, who was prefect of Tirana from 1942 to 1944, as well as other real-life persons using their real names. In the play, Mulleti is mocked as being ignorant and primitive, despite the fact that he was an intellectual, a polyglot, and a high-ranking politician. He was a supporter of Fan S. Noli’s opposition and one of Prince Wied’s four adjutants. He served as mayor of Tirana and later as Prefect of Tirana during the Italian Fascist regime’s annexation of Albania. Fearful of what would happen if the communists gained control, Mulleti sought political asylum in Italy, where he died years later.

Immediately after the premiere, Mulleti’s family, his wife and his 14-year-old son, who are also characters in the play, begins the ordeal of internment in communist camps. They were first transferred to the infamous Tepelena camp, then to Saver in Lushnja. His wife spent the rest of her life in the camp, living with her son Reshit in a cabin. Reshit says in his memoirs that he had no right to leave the camp unless he got a permit, and that he worked all day in agriculture, in the most remote regions and in the most demanding jobs. He was only able to return to Tirana after the fall of communism, after 40 years of exile, at the age of 54, where he lived alone for the remaining years of his life.

Maybe this story is one of the reasons that people are disgusted by a revival. Maybe it’s because the reading aired on Albania’s independence day, and this manner of celebrating the country’s independence did not go down well, especially given the way in which communist propaganda tightly tied communism to patriotism.

Like most of the art produced during the communist regime, this comedy strictly adheres to all the norms of socialist realism and especially communist propaganda. But the revival’s director Spiro Duni insists that it is an attempt to look differently at the character of Qazim Mulleti as the prophet of what would happen with Albania under the communist regime – and for this reason he has intervened slightly in the text.

Watching it on Facebook, these textual interventions, or “repairs,” were easily discernible. At one point, it appears as if the Prefect even proclaims his prophecy that Albania would be overrun by terrible and destructive communism; “the mountains will fall and the garbage will rise,” the Prefect emphasizes.

However, after watching this one hour and 20 minute reading, it is clear that this work, hailed by the National Theatre as a masterpiece, has no real aesthetic value. The argument put forth by Duni and the director of the National Theater Hervin Çuli, that their character of Qazim Mulleti is different from the one produced under the dictatorship, does not hold water. The interventions in the text amount to nothing more than the deletion of some sentences and the adding of others, – they do not change the context. It is not enough to delete some sentences or put some new sentences in the character’s mouth to rehabilitate the whole character. The way the prefect and the other characters are written – the way the entire piece is written – is still stigmatizing and propagandistic in nature. The interventions in the text are like to trying to patch up a ship that’s already sunk, or, worse, imagining that this ship at its zenith, sailing triumphantly on the high seas, when it is actually at the bottom of the ocean.

Following the reading, Duni gives an interview (apparently to clarify things for people who “don’t get it”) in which he said, among other things, that he does not feel at all worried about the negative comments about the show; “what the madmen write does not bother me at all” he said.

The Prefect was revived under the banner of “Nights of reading Albanian drama”, a project launched years ago. Recognizing the difficulties that Albanian dramaturgy is facing, this project aimed to promote new Albanian theatre texts. Texts that would arouse public interest and criticism would be staged by the National Theater troupe. Unfortunately, over time, this effort vanished, and the nights of reading new Albanian drama turned into readings of old texts. In the absence of real shows, the National Theatre used this method to fill in the gaps. 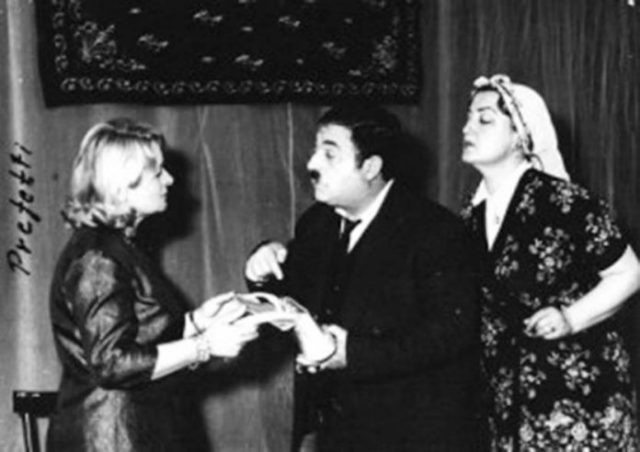 Thus, the revival of The Prefect appears to float on a sea fed by two rivers that aren’t all that dissimilar: nostalgia and neglect.

Following the fall of the dictatorial regime, Albanians did not take the time to grasp what had happened to them, much less to strive to cleanse themselves of it. No one has been found guilty of crimes committed during the communist regime in Albania, and we frequently see nostalgic declarations from various people about the communist regime. In this part of the world, the solution is usually left to time, but time moves slowly.

Communist era Propaganda films continue to be broadcast on Albanian screens and actors and directors who worked for the state appear as barricades to defend their socialist art if anyone attacks it. Albanian art persistently refuses to comprehend the regime’s effects on it, and as a result, it inadvertently returns to socialist non-realism, as a hostage to a hostage-taker.

Read Gresa Hasa’s piece on the destruction of the National Theatre of Albania.