The Never-Ending Story: On The Matrix: Resurrections, time and memory 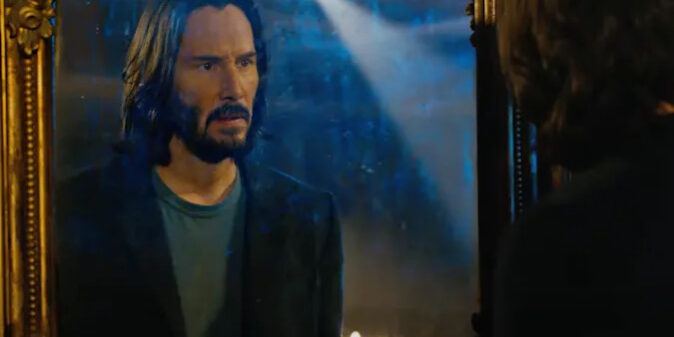 The new Matrix film revisits the saga 18 years on. Natasha Tripney attempts to unpick the film’s metatextual layers and asks whether it can be considered a post-Yugoslav movie?

At one point in Terry Gilliam’s Twelve Monkeys, Bruce Willis’ time-traveller Cole and Madelaine Stowe’s Dr Kathryn Railly, the psychiatrist with whom he is on the run, hide out in a cinema. The movie playing is Vertigo. As they watch Jimmy Stewart and Kim Novak reflect on the nature of time, Cole is struck by the parallels with their situation. “It’s just like what’s happening with us,” he says. “The movie never changes. It can’t change. But every time you see it, it seems different, because you’re different.”

You don’t have to be a time traveller to experience this feeling. Every time we re-watch a film, we watch it as someone else.  The wonder of watching a film for the first time is replaced by a sense of comfort and anticipation. You gain a better, or at least a different, understanding of characters’ motivations. You understand lines that once flew over your head. You realise that those characters who once seemed so impossibly grown up, you are now older than them.

I watched the third instalment in the Matrix series, Revolutions, in a cinema in Belgrade in 2003. It was my first visit to the city. It was raining and I was feeling a bit overwhelmed by the traffic, by the noise and the smoke, and feeling intensely foreign in the city in which my family lived. So I went to the movies, specifically to the Tuckwood multiplex across the street from the Serbian parliament building, and I watched something that, while new, was also familiar.

Eighteen years later, on another rainy Belgrade afternoon, I went to see The Matrix: Resurrections. This time I went to the cinema housed in the building that used to be known as Dom Sindikata, Belgrade’s former Trade Union Hall, which now houses a shiny, corporate-sponsored multiplex. On one of the walls, a painting by the Serbian artist Petar Lubarda links its socialist past to its glossy, popcorn present.

Change is central to The Matrix: Resurrections. During the early part of the film, Thomas Anderson (Keanu Reeves) doesn’t remember that he’s Neo, nor does he release that he is living within a system designed to blind him from the true nature of reality, that he is back in the matrix. He believes instead that he is a game designer, that he is in fact the creator of the matrix, albeit a fictional version of it with a large, obsessive fanbase. The success of the original trilogy is such that he’s under pressure to produce a sequel.

It’s a very metatextual approach, but then that shouldn’t be surprise given, alongside the original director Lana Wachowski, the film was co-written by David Mitchell, whose novels all exist in their own extended, ever evolving fictional universe (and whose novel, Cloud Atlas, Wachowski directed), and Aleksandar Hemon, whose work while constantly and often hilariously addressing the theme of immigration and otherness, is also playfully metatextual.

That said, metatextuality in reboots is almost a given. X men comics exist in Logan and the Scream films revelled in this kind of knowingnes. Sequels frequently nod to the audience about the fact that they’re sequels. The first half of the film swerves between being a sometimes wry, sometimes clunky riff on audience’s hunger for new instalments in their favourite franchise and the pressure on film makers to deliver.  Characters make jokes about call-backs to other films and the very first scene is basically a re-creation of the first scene from the first film. But the film is cleverer than most in this respect, problematising nostalgia while also indulging in it, questioning the way in which we use fictions as places of escape and retreat, a process intensified during the pandemic when, for so many people, immersing themselves in fictional worlds as their own lives have narrowed.

Gradually the film abandons this metatextual approach, evolving into what feels like a subtler meditation on change, memory, and ageing (with added kung fu).  It repeatedly makes us aware of the gulf between who Anderson was with who he now is. He’s in therapy for past trauma, which the film doesn’t cheapen or play for laughs which is often the case with movie-therapy. Even though Reeves looks remarkably good, he is older and the film allows him to mature (arguably both as a character and an actor), to show vulnerability and self-doubt. “What if I can’t be what I once was?”

It’s telling that the portal between the simulated and ‘real’ worlds is no longer a payphone but a mirror. There are repeated scenes of characters catching a glimpse of their reflections – occasionally the wrong reflections – in windows or mirrors. Who of us hasn’t walked past a mirror and had to recalibrate your sense of yourself, to ask: is that what I look like now? Morpheus and Agent Smith are now played by different, younger actors, while Anderson and Trinity (Carrie-Anne Moss) have got older. One of the upsides of franchise expansion, is that our desire to follow favourite characters over time allows us to address the fact that bodies get older, something that Hollywood often tiptoes around or flat-out ignores particularly in the case of women. Now, in films from the Star Wars to Halloween films, older women are increasingly allowed to show visible traces of age on their faces – life is allowed to leave its mark on them.

The Matrix: Resurrections is as much a love story as an action movie – maybe even more of one – in fact it’s not too much of a stretch to argue that, in places, it hits the same emotional notes as Richard Linklater’s Before series of films which revisit the romance between Ethan Hawke and Julie Delpy’s characters at 10-year intervals. When delight and surprise washes over Reeves’ face when he first sees Trinity, now a mother of three called Tiffany with a husband called Chad, it’s hard not to feel the similar pang of recognition and warmth on seeing her, older, yes, but still her, still Trinity.

Their bond pulses through the film. Love has been a force in the films from the beginning but now it feels more central to what the film is doing and saying – about how love can pave the way for change.

The new film’s antagonists are Jonathan Groff, as the new incarnation of Agent Smith, whose uniform of black suit and tie has been swapped for a baby blue cashmere sweater and loafers without socks, and Neil Patrick Harris as the Analyst, Anderson’s therapist, who is helping him deal with his past breakdown, who turns out to be the creator of a new, upgraded matrix, one which is essentially using Neo and Trinity as human batteries to power it. The Analyst explains that this new improved matrix is one no one will want to leave, the level of comfort and other distractions it provides are such that people won’t be driven to resist or ask questions. Twitter, it seems to be imply, is a tool of the matrix as are the fictions in which we immersive ourselves. It’s a shame these ideas aren’t explored more deeply, instead Harris’ Analyst reveals himself to be the kind of villain who revels in explaining his masterplan and even says the word ‘sheeple’ at one point, to ram things home. He also reveals himself to be a rancid misogynistic streak. The film also seems to imply the patriarchy can be bested by punching it repeatedly in the face, which while both simplistic and out of step with the film’s belief in the transformative power of love, also feels like a cathartic riposte to the red-pill bros and the uglier sections of the film’s fanbase.

Watching the movie in Belgrade, in a building that stands next to the square in which, in 2000, thousands of people gathered to remove Slobodan Milosevic from power, only to end up living under a system not all that dissimilar to the one they fought to overthrow, brings an extra resonance to certain scenes. Given Hemon’s involvement, it’s tempting to see this as a critique of how regimes restore and maintain the status quo in post-conflict societies. The film acknowledges how a sense of failure, of having failed to change society for the better, of failing to evade the tightening grip of the system, can wear you down over time and erode your resolve. Fatigue breeds compliance. Reading the Matrix as a post-Yugoslav film might be a leap, but it’s an intriguing rabbit hole to go down and a large part of the Matrix’s appeal has always been the elasticity of its metaphors, the way in which the earlier films can be read as prophetic texts for the coming digital age, as a trans allegory or an instruction manual for conspiracists seeking to free themselves from the tentacles of the deep state.

One of the film’s most striking ideas is the ‘swarm’, when large numbers of people are suddenly transformed into tools of the matrix, vessels with no sense of self-preservation. The film slightly retreats from the full horrific implication of this. One scene in which vast number of people commit what amounts to mass suicide in an effort to stop Neo and Trinity’s escape could easily have been the stuff of nightmares, but it comes off like a human variant on the rain-of-frogs scene in Magnolia.

That first time I visited Belgrade, I spent a lot of time walking around the city, compensating for my linguistic inadequacy by learning its geography, forming a mental map of the city. Last year, following the first lockdown, I found myself doing this same thing, walking the streets. I kept turning corners and feeling a strong sense of familiarity. It was not déjà vu, not exactly, more a sense of recognition complicated by time.

We cannot help but watch films from within our own skin and our own network of memories. I suspect the me of 18 years ago would have been perplexed by many elements of the new Matrix film, its mishmash of ideas, its earnestness, its awkwardness, its focus on – and faith in – love over punchy-kicky business, but I am not that person. I am someone else now, someone new.

Read Darja Davidović’s essay on theatre as a memory machine.

Listen to David Mitchell and Aleksandar Hemon discuss co-writing the new Matrix film on the Poured Over podcast.