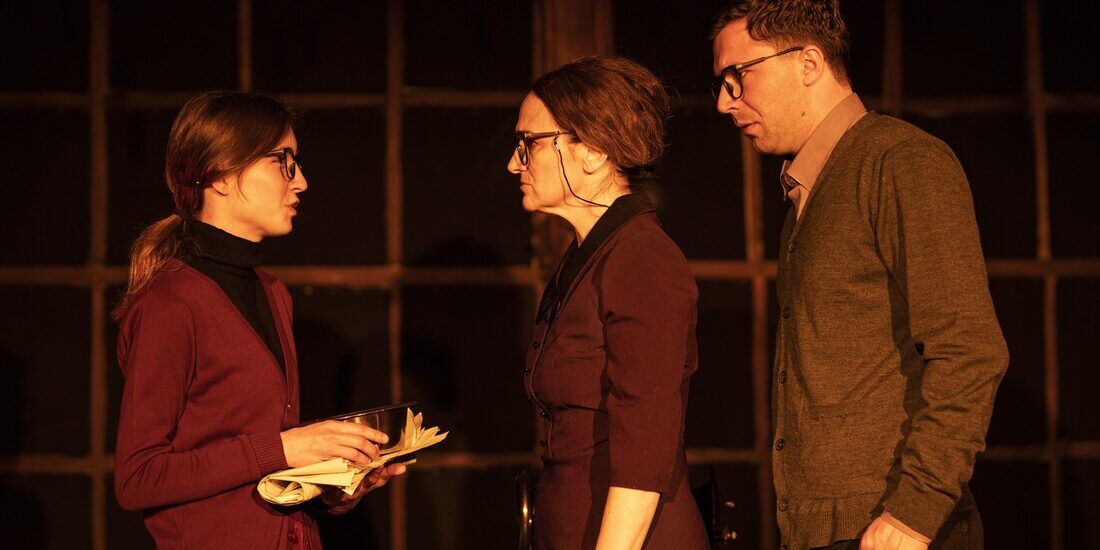 Can you imagine waking up one day and reading your name on the missing person list in the newspaper?  It seems to Din as if someone wants to erase him from the list of living, to deny his existence.  However, he is still there, in front of us, visible. No one can deny that he exists.

Father and Father, written by Jeton Neziraj and directed by Kushtrim Koliqi is performed in a small space at the Ethnographic Museum of Pristina, which creates an intimate atmosphere between the audience and the three characters of the play. By staging it in this pace, a traditional 18th-century house, the impression is created that the play will show us something essential about Kosovo.

Inside the house, a mysterious atmosphere is created using cold blue lighting during the songs which the actors sing at the beginning of every scene. The play takes place inside one room, suggesting that there are some traumas that remain within the walls of the home – no one else can see them. Time also plates a role in the play. For some characters, time passes quickly, for others, time never passes.

In the opening scene, we are presented with a family and their efforts to survive. It seems ordinary, even if later scenes show that they are not as ordinary as they appear.

Insecure in front of people, even in front of his family, Din is far from being the figure of a father. He even looks younger, and more inexperienced than his daughter, Lola.

Din plays no active role in his life either. His wife Sara decides things for him. While Sara is vividly performed by Ilire Vinca, Ahmeti’s Din is more controlled in his gestures and expressions. He stands like a statue in the middle of the stage or sits like an obedient child in the corner.

By contrast, Vinca expresses her emotions with her gestures and seems to overact even in simple conversations, to dominate, even with her laughter, her character always nervously raising her voice. Sara has an energy inside her which drives the whole drama. She is tireless, always working with her sewing machine, looking for two or three jobs, in contrast with the characters of Din and Lola. Even during dinner, it feels as if Sara is the one who holds the family together while Lola seems silent – and Din doesn’t even cut his food.

Lola, portrayed by Kosovare Krasniqi, feels distant from her parents’ conversations; at times it feels as if she is not a character in the play but part of the audience. She speaks only when she wants to bring her parents back to reality. Her conversations with her mother always end in arguments, even though Lola doesn’t appear to say anything disturbing – it seems some words are forbidden in their house.

Father and Father is a play where the audience cannot fully understand the main topic until the end. This is when Lola dares to say to her mother that her father is dead and will never come back.

This is quite shocking. We learn that the version of Din we have seen is based on Sara’s memories and imagination. Revealing the truth only at the end of the play, also feels like an experiment with the audience, proof that if we see something, we believe that it exists.

This is despite the fact that director Kushtrim Koliqi gave us many clues to the truth, such as choosing a younger actor to play the part of Din, showing how he remained young as in his wife’s memories. On stage, it is often noticeable that mother and daughter are standing closer together, while the father mostly stands behind Sara, repeating what she says.

Din exists only for the woman who loves him because she does not dare to accept the truth and continues to act as if nothing has happened.  For her, Din continues to be part of her days, and she forces her daughter to talk to her father as if he is not dead turning Sara and Lola’s daily life into a play within the play. In this way Nezraj’s Father and Father is like two plays, the main one and the one that is played out every day in Din and Sara’s family.

Din disappeared in the war and his remains have not yet been found, along with 1600 missing people from the last war in Kosovo. Choosing to present such an important social issue through a minimalist play on a small stage, with dialogue that avoids melodrama, brings the audience closer to the pain of dealing with such a loss.

Although the purpose of this play is to bring the attention to this issue, the artistic aspect dominated the performance. Focusing more on how a family refuses to accept this loss rather than on the historical context of the war in Kosovo and the missing people, gives the show a different strength – it is dedicated to all those who decide to live in hope, even when there is no hope. 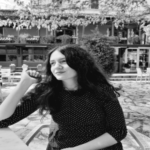 Oriada Dajko is a cultural researcher, young poet, and a short story writer. She has been representative of Albania in festivals and international literary activities
for young writers on several occasions.  Her research focuses on dealing with the past in the Balkans. Her collaborative research studies in the field of memory and dark heritage have been published in Germany and Bosnia and Herzegovina.

Oriada Dajko is a cultural researcher, young poet, and a short story writer. She has been representative of Albania in festivals and international literary activities for young writers on several occasions.  Her research focuses on dealing with the past in the Balkans. Her collaborative research studies in the field of memory and dark heritage have been published in Germany and Bosnia and Herzegovina.