Unmapping Theater: German theater and its attitude towards the ‘East’

You are here:
Germanykosovo
Features 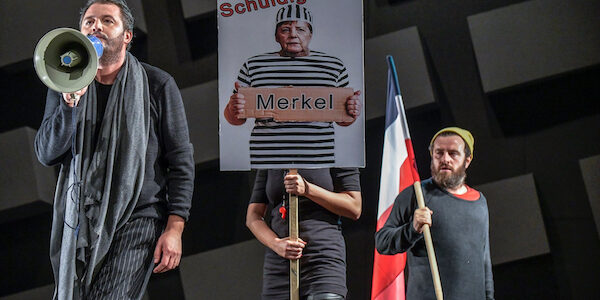 German theater is worshiped by theater-makers in both the East and West. Artists such as Heiner Müller shaped the way we think about performance on stage, as well as its position within society.

Theater can never mirror society. Instead it is a small window through which we can look into possible worlds. Worlds which, unlike real life, are not divided by borders, defined by ethnicity, racism, class and gender but are open to new ways of cohabitation. When economic and political power structures create division, theater has the potential to become a space which transgresses, which creates new spaces that are somehow ‘other’, “heterotopias”, as Foucault would call them.

Over the past few decades, theater in Germany has changed from a place which was exclusively for and by autochthonous Germans, into a place for those from all areas of society.

The experiences of migrant directors, authors and actors enlarged and enriched our view through the small window of theater; it became more diverse and historically interwoven. One of the key examples of the way in which diasporic legacy could be used to speak back to the ‘East’ – in this case, the former Yugoslavia –  could be found in Yael Ronen’s Common Ground at the Maxim Gorki Theatre, a play in which second- generation actors tried to make sense of their uprootedness.

In Germany today, state-run theaters have a duty to the tax-payers to include diverse perspectives and create rooms for encounters regardless of nationality. We are experiencing a post-migrant shift in more and more German theaters, but when will we reach a time when German theater is courageous enough to be truly post-national?  To go beyond navel-gazing and turn its gaze towards the East?

These days true transnationalism within the German theater landscape remains mostly seasonal; it takes place mainly in the form of festivals which try to lift up the iron curtain between ‘East’ and ‘West’ and restock the Spielplan.

There have been two recent festivals in Berlin that have attempted to survey ‘the East’: the Radar Ost at Deutsches Theater and the Post-West festival at Volksbühne.  The fourth edition of the Radar Ost festival took place in October 2021, under the title “Art[ists] at Risk”. Theater-makers from the ‘East’ were invited to explore the relationship between art and conflict. This festival featured collaborations with artists from Belarus, Russia, Ukraine and –  Bosnia and Herzegovina. The constellation of these ‘Eastern’ countries raises the question of which ‘East’ is being searched for and which sensational bloody conflicts they shall perform after all? As Ada Mukhina’s solo performance How to Sell Yourself to the West asks: is having experienced ‘conflict’ enough to place you into the Eastern corner of wilderness’?

Mukhina’s show took an ironic look at this year’s festival motto. Coming from St. Petersburg herself and living in Berlin in exile for a year now, she knows what it is to face a prison sentence, yet, this doesn’t make her abide blindly with Western fantasies. “Coming from ‘evil Russia’ is a big advantage when it comes to getting noticed by the Western art world … You have the best chances if you also have a prison sentence and signature haircut” Mukhina says, using herself as an example to explore the unique selling points and advantages of identity that helped her to become an honorary member of the Deutsches Theater festival. 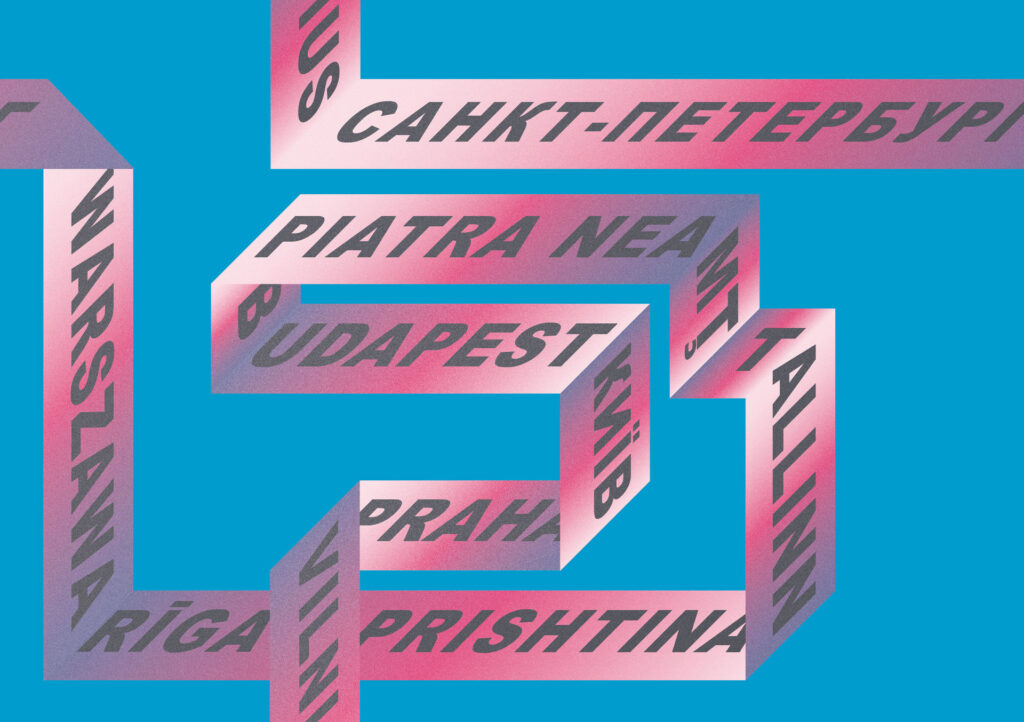 Artists at risk differ in their privilege, their quest for freedom, their history and not least their historical relation to Western Europe. Radar Ost, is the Deutsches Theater’s attempt to look beyond the fortress of (Western-) Europe and break away from the West/East divide, yet the term ‘radar’ also suggests a certain distance and reminds us of colonial explorations – of journeys to areas yet to be studied by Western (theater) expats.

The festival-curator Birgit Lenger did herself a favour by choosing a “cooperating instead of curating” approach and yet it is in such minor curation – putting Russia and Bosnia and Herzegovina into the same ‘Eastern bloc’ for example – where errors can occur and where things can feel not as up-to-date with the postcolonial discourse as in other fields of art, or in the independent performance scene.

Although ten productions were selected for the festival, only one Russian classic – an expensively produced staging of Decamerone, directed by Kirill Serebrennikov – will remain in the repertoire of the Deutsches Theater. One could justify such a decision as an example of an unquestioned admiration for big-name directors, yet it speaks to an exclusivity in the German theater industry which marginalizes other theater-makers from the ‘East’. This brings up the question why the other collaborations won’t outlast the festival to become part of the repertoire, played at least twice a year.

It is worthwhile considering whether part of this originates from questions surrounding the perceived standard of ‘Eastern’ theaters, their aesthetics and dramaturgic quality. If German theater-makers think they offer high culture, the East must therefore be delivering low culture. Within this hierarchical system, low culture is only permissible if it’s seasonal. How else to maintain supremacy?

The Volksbühne chose a wiser title for its transcultural festival, ‘Postwest’, curated by Alina Aleshenko under the artistic directorship of Klaus Dörr. The Volksbühne invited theater companies from the East to revert the gaze ‘the West’ holds towards the so-called ‘East’. The programme consisted of work from Estonia, Latvia, Lithuania, Poland, Czechia, Romania, Hungary, Kosovo and Ukraine. The Kosovo entry was made in collaboration with Qendra Multimedia and the National Theater of Kosovo. The Return of Karl May written by Jeton Neziraj and directed by Blerta Neziraj, fulfilled the promise attached to the invitation by highlighting and deconstructing the racism in the work of popular German author Karl May and his canon of travel-storytelling, which include Im Land der Skipetaren’, with its racist depiction of Muslims and Albanians.

Jeton Neziraj’s play also holds the supremacist structures of the German theater landscape accountable. Subversive interruptions are interwoven throughout the play, in which Neziraj blurs fiction with reality by mimicking the statements made by German theater directors. “Your country cannot even be found on Google Maps … our stage is reserved for civilized countries with a theatrical tradition of at least 500 years”. Although Klaus Dörr has never said these words, the fiction here is closer to truth, or as Neziraj puts it, towards post-truth. From the start of the collaboration, The Return of Karl May was planned to be staged on the side-stage of the Volksbühne in Berlin. Ironically, due to the pandemic, it premiered at the National Theater of Kosovo and Karl May has never ‘returned’ to Germany.

One wonders if exploring the racism behind May’s fantasies would be too much to handle for German theater to handle. After all, it was German amnesia on imperialist legacies that led the Kosovar ensemble to deconstruct May’s work and his racist depictions of Albanians and Muslims.  Albanians did the labour – the ‘issue’ became outsourced – but, in the end, it never arrived in the place where it could confront the German audience.  By not staging the play on the German stage, the play and the issues it explored remains marginalized, on the peripheries of ‘Europe’, lingering in the forgotten ‘East’.

In the examples of both Radar Ost and Postwest, we can see that these invited theater-makers and artists are not drowning in their own “barbaric”, “uncontrollable” local conflicts, they are not paralysed by underdevelopment, they are not waiting for a Western saviour to teach them theater.  They are, instead, concerned with unequal power dynamics between “West” and “East”, in politics, society and – theater.

A step towards making theaters places of heterotopias, places which truly dissolve boundaries, physically – by collaboration – but also in terms of intersectionality; of ethnicity, race, class, gender –  would be to integrate this institutional critique into a future artistic programming. A programming which is invested in building long-lasting alliances, in a redistribution of power, instead of keeping post-Westernism a buzz-word, a durational fashion contained within seasonal performances, whose appearance is dictated by the German theater giants. So that maybe, one day we can look through a small window and see an unmapped world in which the ‘East’ saves ‘the West’ from its megalomania. 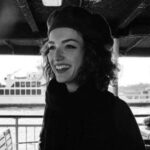 Edona Kryeziu is a researcher, filmmaker and cultural journalist. After obtaining her BA in European Studies at the Faculty of Arts and Social Sciences at Maastricht University, she completed her MA in Migration and Diaspora Studies at SOAS London University, at the Faculty of Anthropology. Kryeziu works at the intersection of story-telling and knowledge production, mostly invested in post-migratism and anti-eurocentricism practices.

Edona Kryeziu is a researcher, filmmaker and cultural journalist. After obtaining her BA in European Studies at the Faculty of Arts and Social Sciences at Maastricht University, she completed her MA in Migration and Diaspora Studies at SOAS London University, at the Faculty of Anthropology. Kryeziu works at the intersection of story-telling and knowledge production, mostly invested in post-migratism and anti-eurocentricism practices.