Independent theatre in Romania: “You can’t change the system from the inside”

You are here:
Romania
Features 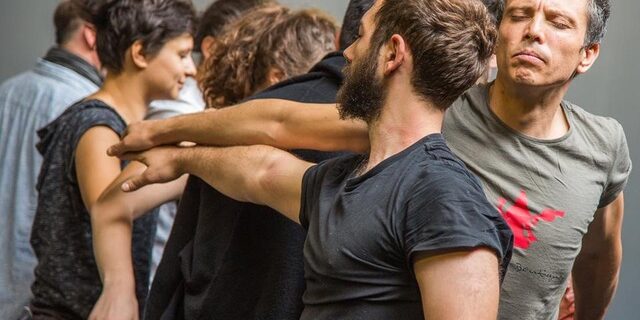 Founded in 2015, Theatre Arts Group (TAG) is an independent theatre company in Romania that trains and supports emerging artists. Artistic director Gabriela Dumitru talks about international collaboration with Louise Coles, of UK charity Creative Youth, which mentors and develops emerging young artists, about the importance of cultural exchange to the next generation of artists.

SEEstage: What is it currently like for independent artists in Romania? How does the state system work and what is it like working outside of that system?

Gabriela Dumitru: It’s only journalists that ask this question, and it’s beautiful that you do! People within the system, they never ask. We have been a democratic country for 30 years now. But we are still in a communist system, which the theatres are also part of, that means we have some government-funded venues that hire actors for over 50 years. This system is closed; nobody can enter. We have an independent system that’s trying to survive besides the communist system. And it’s almost impossible.

In the independent sector, [for one thing], you have to compete with the price of the ticket that is [set] by the government, which is very low. It’s nice that people can go to the theatres, but they are funded by city hall and government and private theatres make their money only from tickets. It is an unfair competition.

SEEstage: You’re both in the process of opening new spaces dedicated to emerging artists. How are you going about this?

Gabriela Dumitru: My idea was to find a way of surviving by cutting expenses. If I don’t have rent, and I find a way to have cheaper electricity, I can survive from ticket [sales]. We have just bought land in the mountains to make a rehearsing space, where for we can rehearse outside and perform. And we are talking with City Hall to give us land where we can put a building where we can perform without rent.

One of the main reasons that independent theatre in Romania started is because the government-funded theatres make theatre as they did in the 1960s and 70s. [On one hand] it’s nice because it’s very emotional and very strong. On the other hand, we are in competition with this system, and you cannot change the system from the inside. I know very good young theatre managers who want to change the system and they cannot because they cannot change the laws; it would take 10 years. We would get very old. 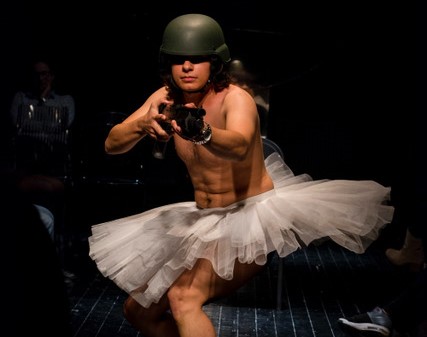 TAG’s production of The Ruling Class

SEEstage: What prompted you to start your own company?

Gabriela Dumitru: In 2015 I started working on a performance in a state theatre of [John Hodge’s] Collaborators. The actors and the theatre management, they couldn’t or didn’t want to change the system. So I stopped. And said I’ll do something private [instead], even if it’s hard, even if it’s complicated.

I met Louise [via] the Actors’ Centre, and she understood the need for change here. I think it’s very important, that when we do a partnership with foreign countries, they have to understand our system. Louise came and understood.

Louise Coles: Yes. I got your mission! My relationship with Gabriela and TAG started when I was Chief Executive of the Actors’ Centre, because we were sending over some of our workshop tutors to do some targeted work with her young actors, so we developed a friendship as well, because I found Gabriela so inspirational, trying to work in that system or work outside of it in terms of what she was doing in Bucharest at the time. I wanted to support her as much as I could on an organisational level, but also on a personal level.

Then I left the Actors Centre and started running Creative Youth. Young people more than ever need the opportunity to connect with Europe and sit on a global stage. I wanted to create a group of like-minded organizations, companies that work towards supporting young people, young, emerging artists, young actors. We’re in the same business, we’ve got the same kind of values. I was keen to get Gabriela over and share her practice with emerging directors.

Gabriela: I’m a theatre director. But here I have to be an acting teacher also, because there are problems with acting and I discovered is it’s harder to change an already-formed actor, than it is to teach a young one. The actors here are in the system for 10 or 20 years. And it often feels like you’re watching a performance from the 50s, or a movie from the 80s. They don’t change. Bucharest is a big city and the theatres seat around 20,000. So they’re always full, because the tickets are low.

Gabriela Dumitru: They don’t have a reason, right? They have the money; they have a salary.

Louise Coles: Basically, there’s no investment into continuing professional development, which is why you came to us, for basic things like voice projection.

Gabriela Dumitru: [In Romania] We had a revolution; we said ‘democracy,’ but the system didn’t change with us. 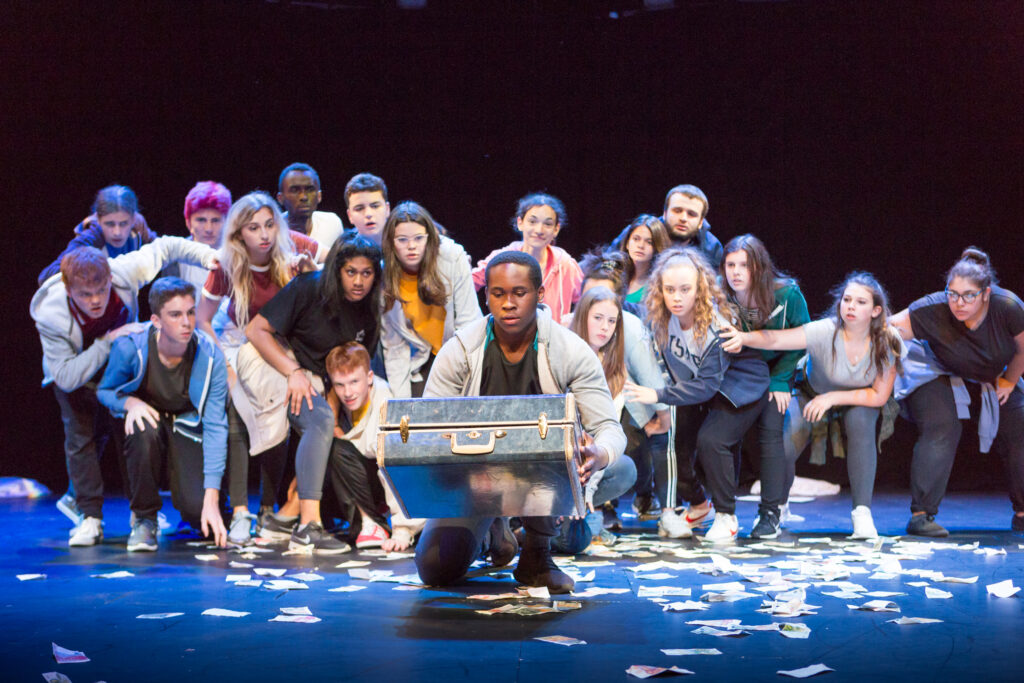 SEEstage: During the pandemic, TAG participated in the IYAF [International Youth Arts Festival, now known as Fuse International], making work online. How important was it to keep making work?

Louise Coles: The young people I work are really resilient. They’re actually more positive and resilient, than I think I gave them credit for. If anything, I was honestly surprised that people were just  staying focused and getting on with what we decided to get on and do, including our digital festival. They just kept on with it. They wanted a purpose.

SEEstage: What does the idea of collaboration and exchange mean to you? What are the benefits?

Louise Coles: To me, [collaboration] is about sharing practice, sharing networks and knowledge; it’s also about starting to do exchange projects, having co-creation projects, with our young emerging artists. Both companies have new training spaces, which is really exciting.

English artists all moan about lack of funding But, actually, when you go somewhere like Romania, where there’s no funding for independent artists, I hope it will give them some perspective. It’s not about saying we don’t deserve more, but it’s about understanding the political environment of the countries and how their systems operate. And I think it’s really important for them to get practice in a global context, if they want to try and get work abroad as well. Because we don’t just support emerging creatives but also emerging leaders and businesspeople, producers.

I started my art career in the early 80s and even then we were desperate to collaborate internationally, to speak to different cultures. And that hasn’t changed. It’s true of young people more than ever, so we don’t become isolated as a nation.

Louise Coles: There are good environmental things that we could learn from, because there is an emphasis now on environmental practice from the Arts Council, and there are some adjustments we could certainly learn about, to focus less on flamboyant productions and more on the quality of content.

SEEstage: Gabriela, what impact has the situation on Ukraine had where you are? Obviously you’re much closer geographically and are taking far more refugees than the UK…

Gabriela Dumitru: During Covid, we continued to work. Now, for the first time, we stopped, because I don’t think it’s the moment to be creative, when people are having these very serious problems.  [The Ukrainians] are coming to us. And they have a lot of questions and speak Ukrainian, so it’s difficult for them to manage here. Also, here. It’s a very expensive country. So I think we have to stop [what we are doing] and help – and really help – or we all give up and we let him do whatever crazy thing he does. We are in the middle. The [Ukrainians] are dying. Russian soldiers too. It’s a tragedy on both sides. Because of this one egomaniac.

Gabriela Dumitri: Yes, because we have a border [with Ukraine], and in the past {Russia] has wanted parts of Romania too. People are buying gasoline, they buy beans, everything they would need to survive because war is coming. And the banks are full of people, trying to take Euros out of the bank.

Louise Coles:  It’s not the right time to launch now  – or is it? Maybe something can come out of this?

Gabriela Dumitru: It’s a very strange time – when people are dying. The strangest time. We are not performing but we have prepared the building, we already bought lights and sound systems. I’m trying to see what plays I would like to perform and to do a repertoire – and wait. Now is worse than Covid. Now it’s really not the time to make the leap.

As a theatre director, I have to study human beings, this is my job, I have to understand human beings and understand a little bit of how this universe works. What I understand is that the creative industries should help people to survive. And more than survive. To make life beautiful.

We have a holiday here – Mărțișor [a celebration of the beginning of spring). And we have to give small gifts to all the women, like a pin or something because spring is coming. We did some creative things and we took them to the park and we gave it to the people to see their reaction. And they were very surprised and happy. Finally smiling a little bit. Saying: it’s beautiful, it’s colourful, thank you. And was very strange but also it was like, oh, I’m still alive. And this is what we have to remember: that we are still alive.

Louise Coles: That’s the role that we play; it’s not just about watching the show, it’s about what we bring to life, isn’t it?