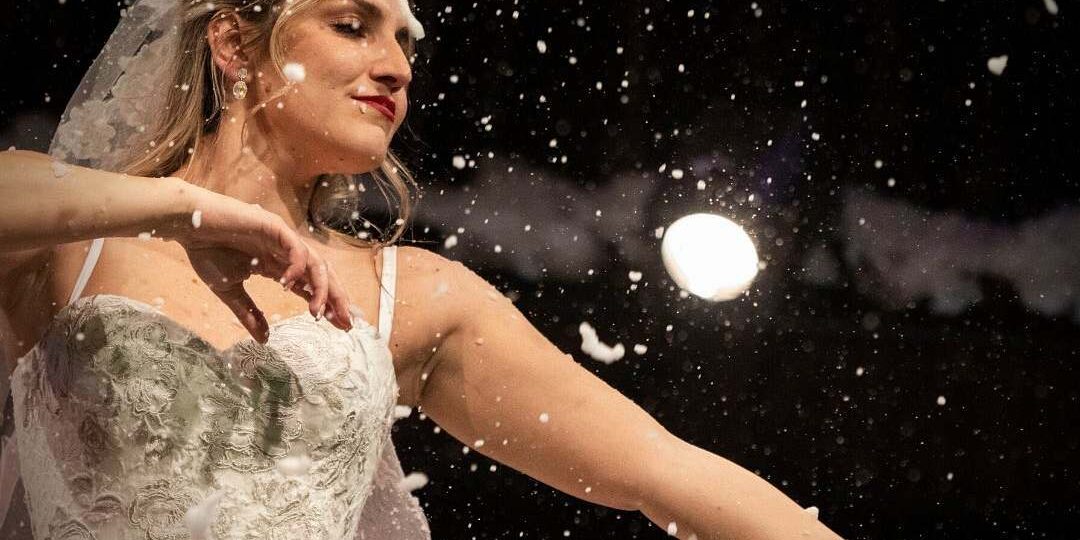 “I will never understand why dinner conversation with you lot always turns so damn contentious. why can’t we have some pleasant anecdotes for example.”

For four generations, only girls have been born in the Kos family. The most striking elements of Tena Štivičić’s play Three Winters (Tre Dimra) are the bonds the exist between the different generations and the sisters. The male characters function as foils for the female characters, rather than being the centre of attention.

Spanning a period of 70 years from the end of the Second World War though to 2011, Štivičić’s play which played the National Theatre in London in 2014, tells the story of the Kos family over time – and the Zagreb villa they inhabit, which was partitioned after the war.

The four main characters from the four generations of the family – Monica, Rosa, Masha, and Lucia – appear to form a straight line. Rosa is the committed partisan who has already won the war and now owns a part of the villa of which Monica, her mother, who used to serve as a maid; she continues to look after Katherine, the villa owner’s daughter, who has remained at home.

While Masha (Rosa’s daughter), who looks after the house, is empathetic, and frequently neglects herself in an attempt to adjust to the constant transition, Lucia (her daughter) is more practical and pragmatic, and strives to take over the entire house by any means necessary, removing the other residents.

The other two daughters of the family are less traditional and more disconnected; Dunja is a lonely. battered ex-wife and Alisa an equally lonely academic living in London. Both have emigrated from Croatia and observe the home and family from afar while not being fully immersed in them.

While Dunja’s relationship with Masha appears to be calm and tranquil currently (though there may have been disputes in the past), Lucia and Alisa’s relationship is quite different. Alisa raises concerns about her family’s apparent adaptation to new bourgeois behaviours. Lucia, on the other hand, is certain in her position, telling Alice that she has decided not to live in this house or in Croatia.

The performances are strong throughout. Dunja is played by Luiza Xhuvani, who is fantastic fit for the role. It appears to be relatively easy for her to convey the character’s independent and powerful personality, which comes out in the conflict with her husband, who is played wonderfully by Viktor Zhusti. 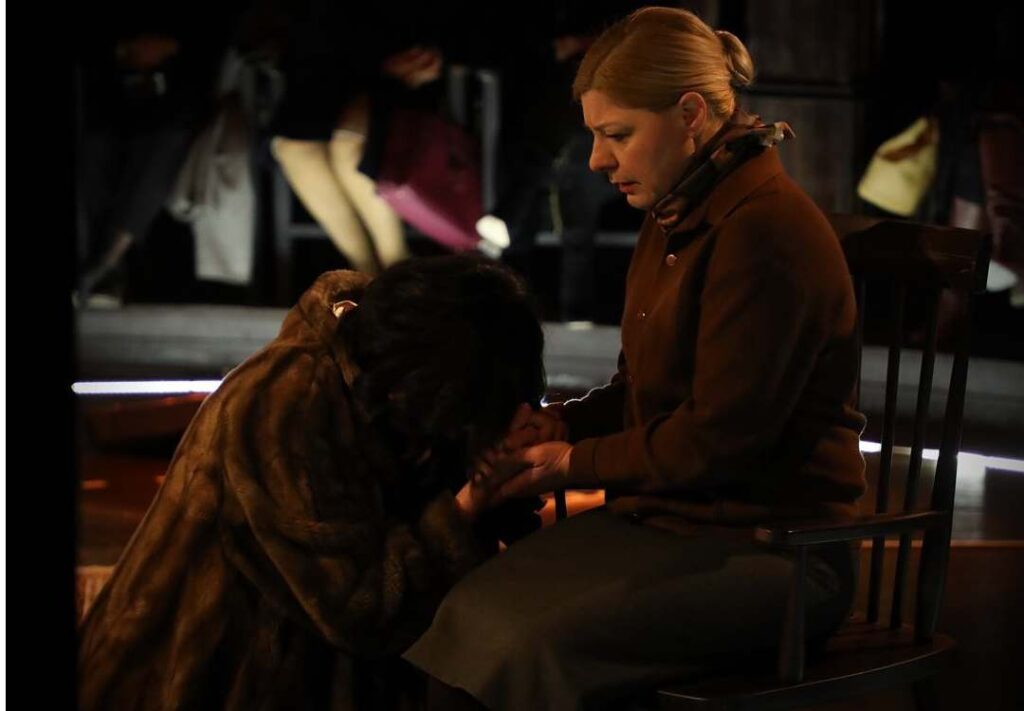 Sokol Angjeli’s portrayal of Vlado is also quite natural, and he complements Yllka Mujon’s portrayal of Masha. Armela Demaj’s portrayal of Alisa beautifully captures the differences between her and the rest of the family. In addition to having fine performances and well-built characters, Rozi Kostani’s staging is also visually pleasing (scenography by Stjuart Reçi). As partisan songs are sung and clothing is flung on stage from balconies in the first scene, we see Rosa selecting the key to the new house where she would dwell after the war. Then, we go into the house and into the living room, where dinner is being served, with a warm yellow chandelier gleaming above the table –

After all the character dynamics and events have unfolded calmly and slowly, like the burning of wood in a chimney, Štivičić’s play reaches its climax. Dressed in a white wedding dress, bride Lucia climbs on the table and dances, spinning, revealing how pragmatism is now the winning way to survive, as her sister storms back to England.

In this play, winter represents the endurance and struggle to make it through difficult times till better days arrive. However, when used as a metaphor, winter can last for years and extend beyond the period of a season; thus, children are born and raised in the winter, then marry someone born and raised in the winter. Then, in winter they give birth and raise their children, until, at a later age, they flee and vanish in the snow.

“I no longer understand this world – now trust is seen as stupidity, compassion is weakness, and solidarity means you’re unable to look after yourself,” laments Masha over her own child’s marriage to a shady businessman. However, everyone, except of Alisa, accepts it. They were all born and raised in the winter and that’s why the seal of their survival has been imprinted on them. While Alisa returns to England, they continue to live with that seal in a long prolonged winter, unsure when winter will be over.