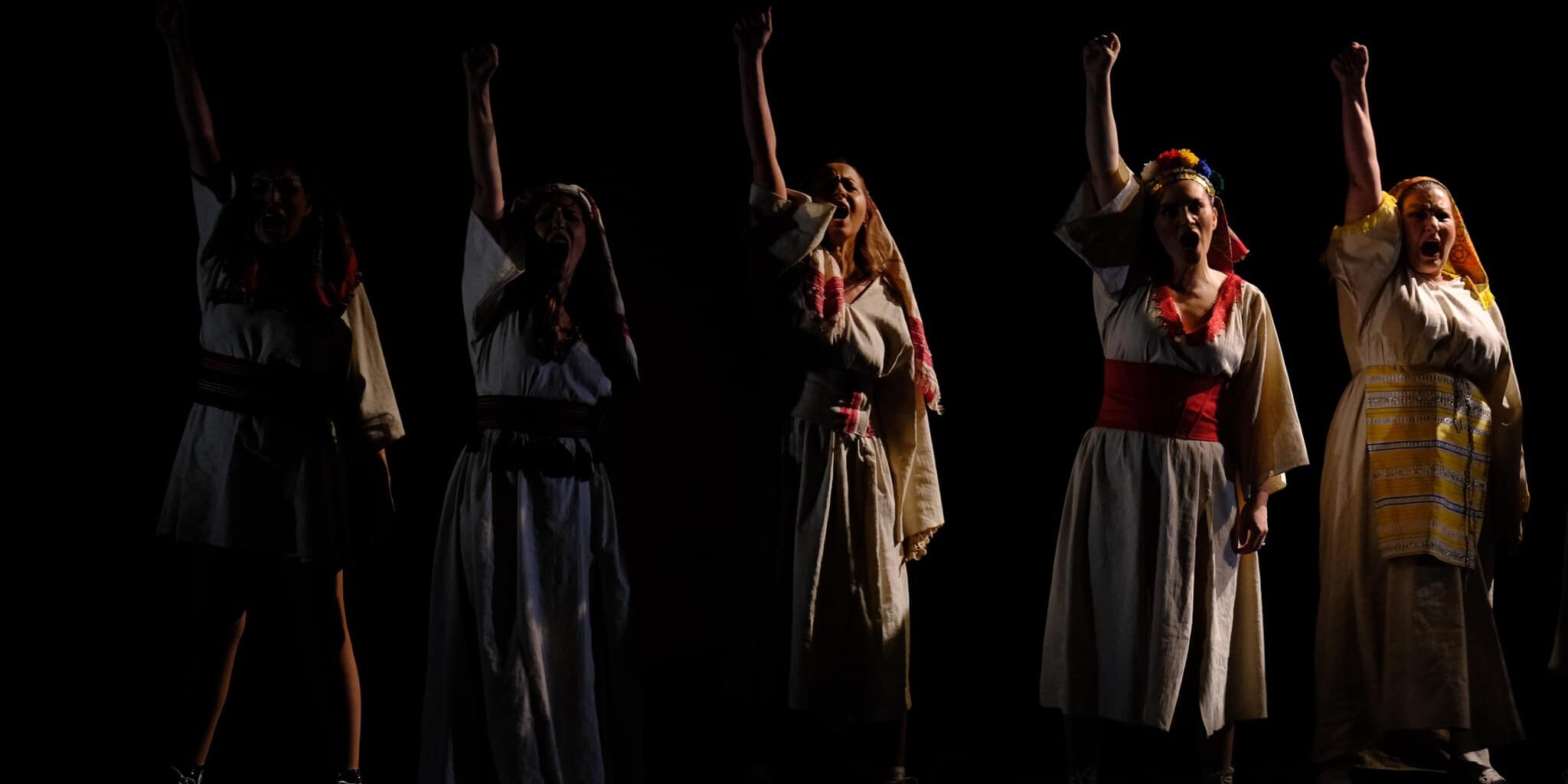 Written, directed and acted by women, The Women occupies a unique space in the Kosovo theatre scene. A devised project based on a text by writers Agnesa Mehanolli, Brikena Sopi and Ulpiana Maloku and developed with the actors and feminist theatre-maker and director Nastazja Domaradzka, it spoke about one of the most pressing social issues of our day: gender-based discrimination and violence.

The women all don traditional Albanian costumes, including fringy scarves. Their dance around the stage is only the first of several choreographic moments throughout the performance. Although at first the dancing gives off fairy vibes, the dramatic soundtrack suggests otherwise. Some of these women haven’t danced since the war, they explain, and their bodies don’t recognize the rhythm anymore. “Do you know what happened to me?!” is the simple question that sets off the performance, asked by Shengyl Ismajli as she moves close to the audience. The scenes that follow describe their experiences, different lives with one predicament in common: being a woman. That is their sin. 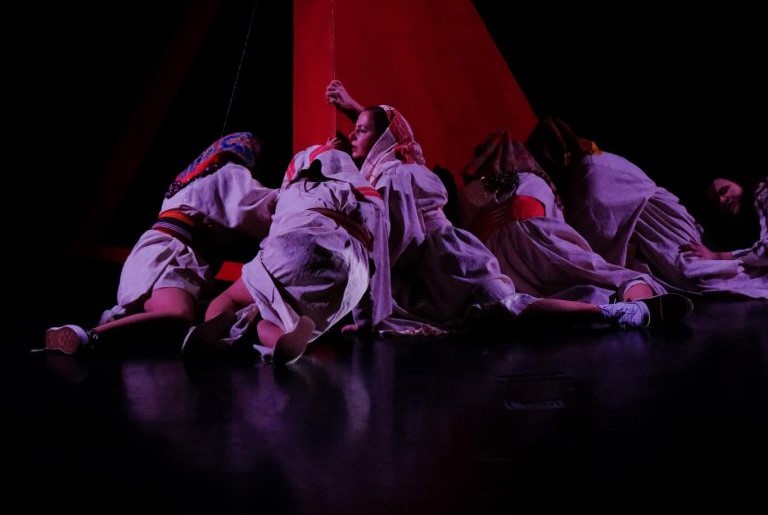 The Women at National Theatre of Kosovo

If I had to use one word to describe the first ten minutes of the play, that word would be ‘acrimony’. Nevertheless, that would only begin to do justice to the mood of the piece. As the women share their stories, they repeatedly seek evidence that they matter. “I matter, we matter, no matter what”, they sing in chorus. One of the women (Sheqerije Buqaj) glides through a monologue, deploying overwrought dance moves and repeatedly echoing the phrase: “In Kosovo, men and women are equal”. Their stories unfold with each passing moment. They are the women men fear to please and whose beauty men find discomfort in; they are subjected to cursing and shaming. But speaking out loud helps. “This is better than any drug” they repeat to themselves, to each-other and to the audience.

The play covers a wide range of gender-based oppression and violence. From fathers deciding and diminishing their daughters’ dreams to abusive husbands, from being shamed for being an artist to living as a rape survivor. In one scene we hear from the ghost of a domestic violence victim. Softness and rage are intertwined in a further musical number (composed by Rona Berisha Castrioti) which they call ‘beautiful fury’.

The supremely talented Gresa Pallaska talks, sings and dances with her back on the audience – conveying the sense of what it feels like to be alone with pain while the world looks on. “History is never made with you and for you” they agree in unison. Unfortunately, history is repeating itself as women continue to be abused and killed at an alarming rate. Many of these victims have reported the abuse to the police before, but no protection whatsoever was afforded them.

Despite having the youngest population in Europe with distinct open-minded and modern inclinations, Kosovo continues to witness the horror of gender-based violence and femicide. Only in 2022, there were two large protests where thousands of people demonstrated against the lack of legal action for cases of rape and domestic murder. They are the biggest such marches to date in Kosovo.

In The Women, the performers share and care in perfect solidarity with one another, the only heart-warming respite against the bitter-sharp reality they represent. The stage seems to be otherwise enwrapped in a dark cloak of affliction. The performance of Edona Reshitaj, as the ghost of a woman killed by her husband, is both chilling and wrenching. Gresa Pallaska gives an incredibly compelling performance, playing the rape survivor who is still reeling and wondering why this has happened to her. Lumnije Sopi gives a frank and candid performance as the woman who was cat-called in the street and is puzzled about how mundane a thing this is. Xhejlane Godanci is fascinating as the proud independent woman who became an actress, only to be labelled a ‘whore’, while Shengyl Ismajli is a force to be reckoned with, playing the woman who is just tired of having to be strong.

Whatever they wear is wrong, whatever they do is a sin. And yet, through their bond they find a way to interweave and project their pain, rebellion, strength, love, beauty and sexuality. The Women at National Theatre of Kosovo

The production is urgent in its message about gender discrimination and violence against women. Major change is desperately needed to address this phenomenon, which has grown particularly since the pandemic, not only in Kosovo but across the Balkans. Although The Women is a step forward, tangible action is required on a massive scale to address impunity and institute tough policies.

There are two phrases that are repeated at least a dozen times, “Do you know what happened to me?” and “In Kosovo men and women are equal”. They refocus the performance and avoid any possibility of digression, perceived or otherwise, while reinforcing the point of the play. The audience is reminded time and again of the gruelling impact of this treatment on mothers, daughters, sisters and lovers. These women are not having it anymore. Their rage and indignation comes through with force and fury, and it is clear that the storm has only just begun. The call of “do you know what happened to me” gets louder and more powerful every time, shaking the walls of the theatre hall.

Breaking out of character seems to be a trend in Kosovo theatre lately. It’s a bunt but effective way of getting through to the audience. The tough questions the actresses ask of the audience hit hard, because they prove once more that violence against women affects all members of society. We are all responsible for the fight for women’s rights, not only as a matter of gender equality but as a matter of human rights.

At the end of the performance, with sombre faces the actresses recall the names of those women who were victims of domestic violence at the hands of their husbands or partners. The list is long.

The stage design of Rudina Xhaferi, an artist known for breaking boundaries with new-wave art, features three concave red pyramids with mirrors on the sides. The women slide in and out of these wheeled scarlet vessels, concealing themselves within them as if to hide away their ‘sins’ in the patriarchy. The names of domestic violence victims are scribbled in chalk on the stage walls, alongside cuss-words like ‘whore’ and ‘slut’, and hopeful messages like ‘love’ and ‘confidence’. Two of these writings stood out: ‘freedom brings serenity’ and ‘my voice has wings’.

The music and sound design, curated by Rona Berisha Castrioti, is a beguiling and eclectic mix of traditional Albanian music and hip-hop. The choice of traditional clothes points to the heavy burden of traditions that have suppressed women for centuries. At the end of the play, one by one the women peel off their costumes and throw them away furiously.

Over the course of 2022, the subjects of women’s rights and male violence have become a ubiquitous and necessary theme in the arts. The fight goes on. 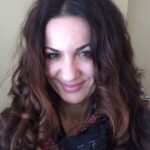