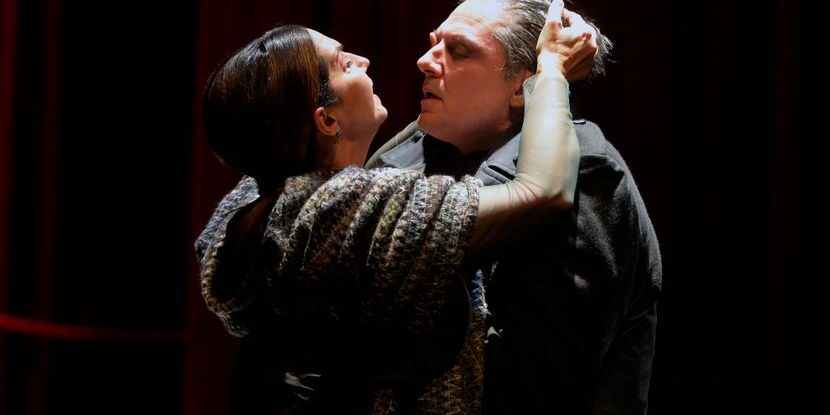 The playing space has been inverted in Jagoš Marković’s visually striking production of Shakespeare’s tragedy. The audience is seated on the stage looking out at a crimson curtain which hides the auditorium from view, while another smaller platform has been erected with a grill in the middle that is lit from below. It is atmospheric and promises intimacy.

Macbeth is an account of a couple undone by their craving for power, whose rampant ambition turns them murderous. It is Shakespeare’s shortest play and here the text has been whittled down further, galloping through the narrative from prophecy to downfall in an almost too-swift 90 minutes.

Nebojša Dugalić plays Macbeth, the ageing military man who is told he will one day wear the Scottish crown, and Nataša Ninković is Lady Macbeth, the wife who urges him to do whatever necessary to propel events forwards, even if he must take life to do so. Dugalić has the weary air of a man who has been soldiering for a long while and, on seeing a chance to advance himself, lunges for it.  The Macbeths passion for each other is evident, particularly when they embrace and he falls to his knees before her, caressing her stomach. This is a couple who have known loss and seem to feed off one another’s longings. When Lady Macbeth starts to comprehend the enormity of their actions, in a sly, presumably intentional nod to Konstrakta’s iconic Eurovision performance, she lifts her tainted hands skyward and gently rotates her wrists; but when Dugalić’s Macbeth grapples with his conscience, it feels more forced – his internal conflict too quickly resolved.

When King Duncan is eventually dispatched by Macbeth, the grill at the middle is lifted with a mighty clang and the older man descends with dignity into the darkness below (though he has to duck his head at the end). Later, when Macbeth is tormented by Banqo’s ghost, spectral fingers reach up through this grill as if from the underworld.

Marković’s production contains an impressive coup de théâtre midway through when Macbeth becomes king and the curtains behind him lift to show the grand interior of the National Theatre behind him, the pillars, balconies and boxes ablaze with red light. The three witches, who now sit watching from the auditorium, are both an audience to his downfall and its architects.  This trio of black-clad women are the shadowy forces behind the public face of power, silently observing everything from a safe distance.

When the curtains lift the Macbeths in their newly donned regalia are also suddenly exposed. Great power brings with it many things including vulnerability and, during the coronation scene, Ninković’s arms visibly tremble as the couple hold their hands aloft in what is supposed to be a gesture of triumph.

The lighting elevates the production considerably, enriching the atmosphere and advancing the narrative.  Red light saturates the theatre, transforming it into a Dante-esque space and, later, Burnham wood is strikingly conveyed via shifting shafts of green light which crisscross the auditorium. Lana Cvijanovic’s costumes are relatively contemporary. There are lots of turtleneck sweaters and sweeping grey coats. The assassins wear balaclavas, the soldiers an array of capes. Throughout the music shifts between folk and opera.

This up-close approach echoes the way Shakespeare’s plays would have been viewed in candlelit Jacobean playhouses. However, the staging seems to be setting us up for a more intimate experience than it ultimately provides. Marković’s production doesn’t capitalise on this proximity. The performances often feel as if they are playing to a full auditorium, with large, sometimes overwrought gestures and a heightened theatrical delivery – the kind of mannered Shakespearean acting that works far better for the upper balconies than the people sitting a metre or so away. It is a puzzling choice. When Jovan Jovanović’s MacDuff is informed his family has been slaughtered, the way his disbelief gives way to anguish is more effective than some of the more floridly delivered soliloquies. 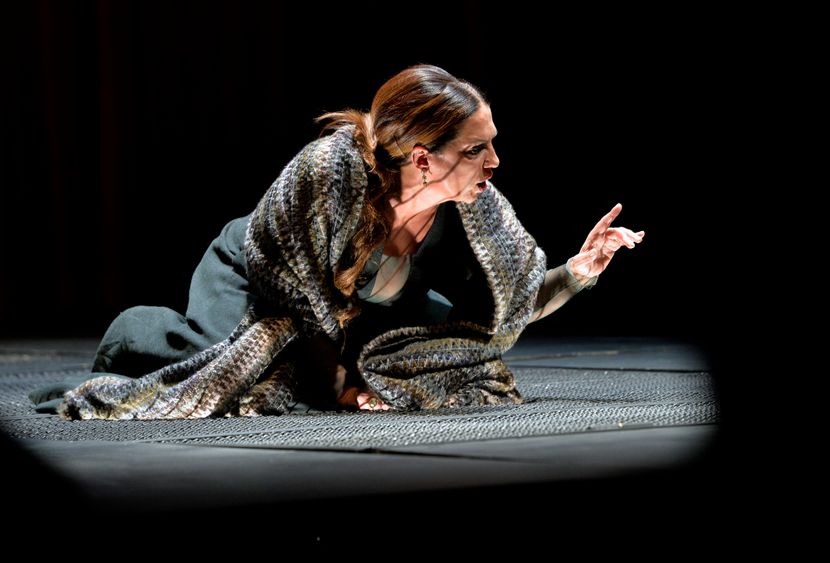 The Macbeths may have stolen power, but they haven’t mastered the art of performing power. When Banquo’s spirit appears before him, Macbeth can’t conceal his shock and panic and at one point he covers his head with his jacket as if to hide from the carnage around him; defacing himself in this way, he becomes little more than a symbol, a crown on legs.

They never get a chance to learn how to play the leadership game. Their inadequacy hastens their inevitable demise. It’s hard to tell whether Macbeth believes himself invincible – that he cannot be killed by anyone of woman born – or if he desperately wants to believe it. In the end it doesn’t matter, the unseemly speed with which Macbeth is crowned and them killed eclipses even UK Prime Minister Liz Truss’s ridiculously brief spell as leader,

In this edited version, the rapidity with which events occur undermines the play’s emotional trajectory. When leaders fall, they tend to fall fast, but even so the last half hour feels rushed. it still doesn’t diminish the play’s resonance as a text about power and the heinous lengths some will go to attain it, about how once attained people will cling to it like a child who’s recently learned how to grip, but the production lacks a sense of political urgency. It feels disconnected from world events.

Nor does it find a satisfying tonal balance. The grandiose operatic moments work best – the climactic crowning of Malcolm is very visually striking – but there’s an old-fashoned rigidity to the performance as a whole. As close as they are to the action, it keeps the audience at arm’s length. It doesn’t allow you under the characters’ skin.