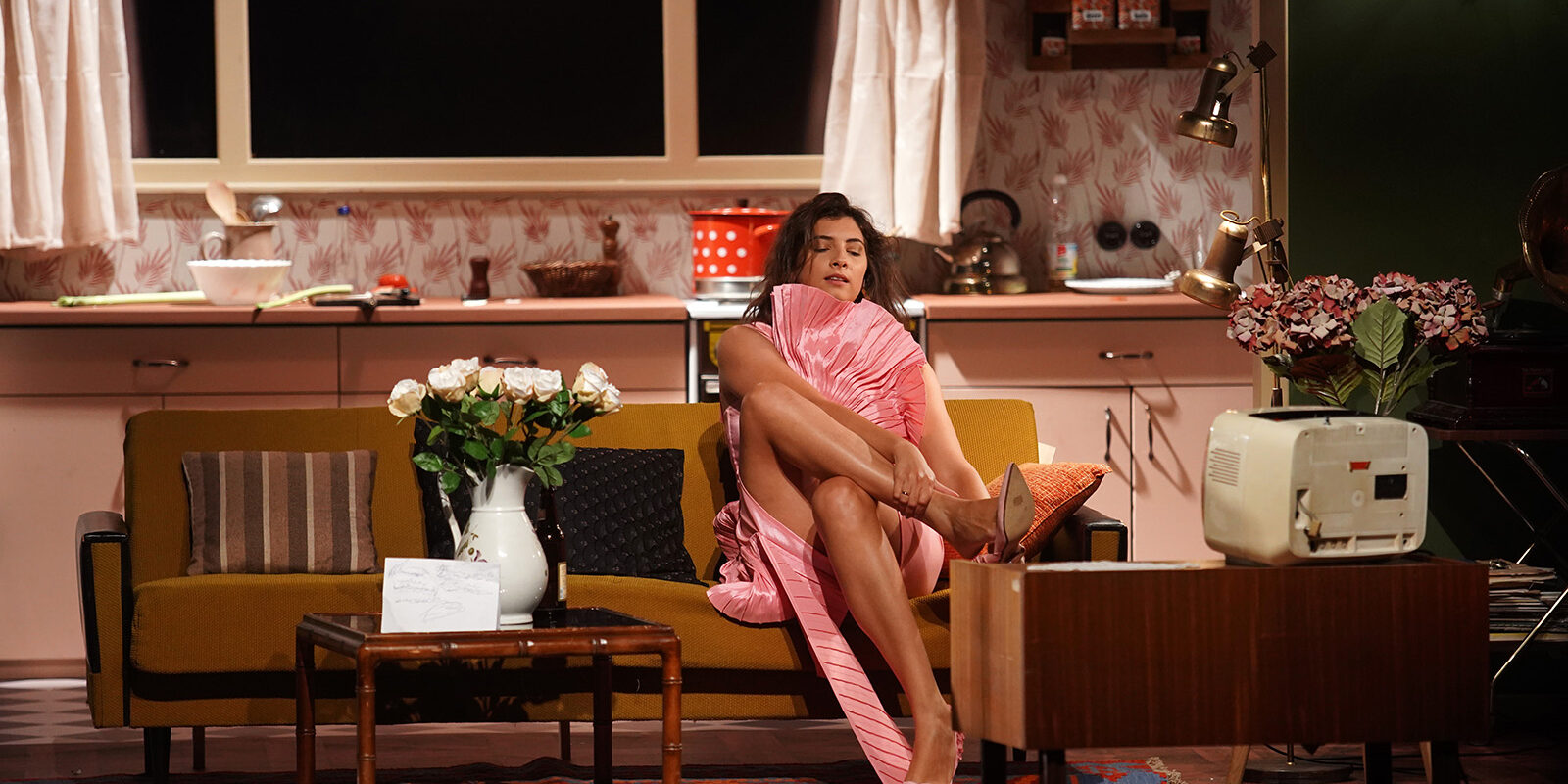 Living Room is a title that operates on two levels. It is a play on words. A room as both a space for living and a living space. The work of Ersan Mondtag – the director and designer from Berlin who has previously presented Snow at the 51st edition of BITEF – is concerned with interiors.

For this co-production between Belgrade Drama Theatre and Bitef Theatre, he has designed an immense revolving set which rotates to show the passage of time, the passing of years.

A man moves around his kitchen as a football match plays on the television in the background. The set feels like a lived-in: from the saucepan on the hob, to the bottles of cooking oil and various knick-knacks that dot the surface. The cushions on the sofa look as if they have been sat upon. The furniture is elegant but not expensive. It looks, in short, like a home. The man chops some vegetables and occasionally glances at the screen. The production devotes a lot of time to watching him inhabit this space. The pace is unhurried. Everything he does, he does in real time. Eventually the man’s wife returns, nervous, excited; she is an opera singer about to make her debut in Tosca. They eat a meal together. He teases her about farting in the bathroom. The affection between them is palpable, as is the sense of anticipation, of lives on the cusp of change.

Then everything shifts. The set rotates to reveal a second space, a bedroom with dark walls and a vast painting suspended over the bed: Osvajanje Beograda by Katarina Jovanovic. Tito’s death is announced on the radio. The phrase is repeated over and over. Tito is dead. Tito is dead. Comrade Tito is dead. The world is re-routed.

Time – and the set – shifts once again. We see the young woman making herself ready before colliding with an older woman in the foyer of her building in her haste. The set rotates once more to reveal a new face. The same apartment, but this time beautifully furnished. All mustard yellow and deep teal, handsome modernist furniture and artfully arranged photographs suggestive of a rich life. The older woman – played by renowned Serbian actor Vesna Čipčić, in a dramatic red head wrap, with a scarlet shawl draped over her shoulder – weeps on the sofa. She prepares a meal for herself. A meal for one. Once again, we watch her chopping. She eats her meal neatly, a glass of red wine at her side. As she eats, she listens to the radio. On the radio, there is a broadcast by Dejan Đurović, exploring a woman’s life – her life, her illustrious career, and the tragedy that has marked it, the death of her husband, who joined the Yugoslav army and died during the war.

She is, it is by now, obvious, an older version of the young woman from the first scene, 40 years later, at the other end of her life, looking back and reflecting. The radio broadcast plays over some time, Đurović’s voice filling the space. There is a lot of life to go through. Engagements on famous stages. The fateful moment in her younger years when Tito died on the night she was due to make her debut, entangling her story with that of Yugoslavia.

The set continues to revolve, as more time passes, as the world continues to turn. We see the woman’s possessions, her life, slowly boxed up and packed away. The past and present overlap. We see the two different iterations of the man she loved. We see her and her younger self seated together on the bed, back to back, two versions of the same woman at different points on their journey. There is a process of ghosting at work. (In this Living Room recalls JB Priestley’s time plays from the 1930s and 40s and their preoccupation with time and its passing – the “problem of time” as he put it).

This is the second work in Mondtag’s Living series. The first, De Living was produced for Milo Rau’s company NTGent, and charted the hour leading up to a woman’s suicide. It featured a similarly striking aesthetic: turquoise walls and a chequerboard floor.

I’m always hesitant to describe something on stage as having a cinematic quality – what exactly does this mean to say this? Is it purely a question of aesthetics? Does it suggest a failing, something visually rich but anti-theatrical? Because, on one hand, the revolving box is incredibly theatrical – a feat of engineering and choreography. Yet there is something of cinema in this piece too. In its visual composition, it alludes to Kubrick – if not quite as explicitly as Mondtag’s 2015 production Tyrannis, which duplicated The Shining’s iconic geometric carpet. The vast, symbolically apposite painting over the bed feels Kubrickian, but it also owes a debt to the work of Almodovar, in its colour palette and emotional register, in its pathos, in the figure of the ageing opera diva at its centre,; it has a bit of Lynch in its DNA

The one piece I found myself thinking about most while watching it was not a film but Franz Xaver Kroetz’s Request Concert, a wordless 1973 play in which a middle-aged woman moves around her apartment, changing her clothes, preparing and eating a frugal meal, using the toilet, all while the radio plays, before swallowing pills and ending her life. This level of extreme intimacy and voyeurism is certainly flirted with here, the emphasis on routine acts, on mundanity – vegetable chopping – and bodily functions – farting and pissing, the things we all do. These are sometimes dull to watch – sometimes hypnotically dull, at other times just dull-dull – but that dullness is part of the texture of the production, and of life more generally. We chop a lot of carrots over the course of our lives.

Though Mondtag attempts to emmesh the opera singer’s story in that of Yugoslavia, his production maintains a discreet distance from the collapse of the country. These events happen in the time gap. They pass into memory. They are at once the past and the future.

In the end, it would not be untrue to say that the spectacle of what we are witnessing, the precision of the choreography required to create this sense of echo, is the most impressive aspect of the production. From a technical perspective, it’s an incredible accomplishment. But there’s also a passivity to the production, a coldness one might argue, that can read like an absence, a lack of ideological underpinning. This can feel frustrating even though it feels very intentional, a way of giving its audience space. That’s the thing about rooms – we have ways of filling them up.