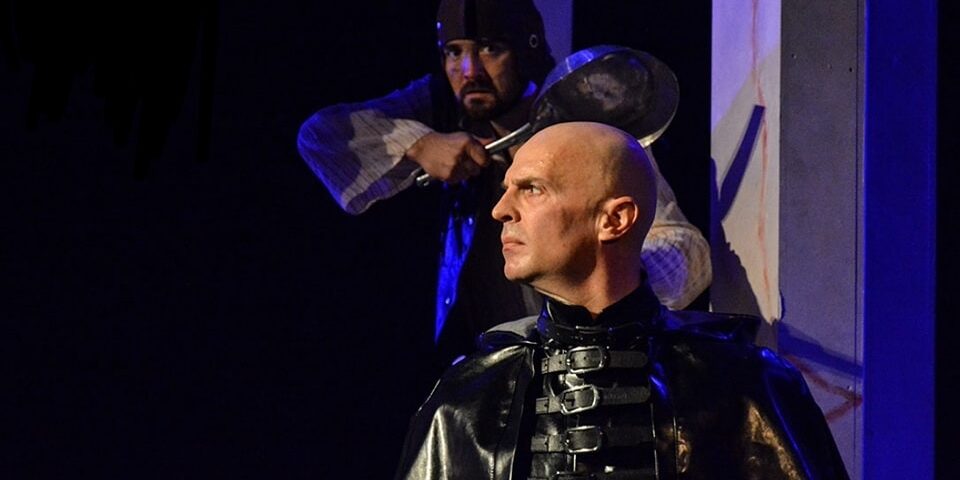 I was ready to leave behind what had happened to the National Theater, the destruction of that old building in the center of Tirana, which didn’t fit in with the surrounding “elegant” architecture. The Prime Minister is concerned about architecture, and he is rebuilding Tirana to his liking, intervening where he can, choosing architects. In the end, we must remember that he is both an artist and a prime minister. This is our misfortune; those in power tend to intervene more in the areas in which they are interested and leave the areas in which they are not knowledgeable to professionals.

In 2018, director Altin Basha (who is now the director of National Experimental Theater) said during an interview with cultural journalist Elsa Demo that Prime Minister Edi Rama and former Minister of Culture Mirela Kumbaro are behaving “like elephants in a glass store, destroying everything they touch.” A few months later, he shifted his allegiance to the government, supporting the demolition of the national theater.

Some people are still demanding that the old theater be rebuilt where it was and as it was, but this seems pointless to me. The idea was not to re-build, rather to preserve what already existed. Despite all this, I couldn’t hold a grudge against the national theater any longer; after all, I thought, I could see a good show even in the new space.

Arturbina, previously a hydraulics laboratory, has been converted into a temporary theater until the new theater is built – though construction has yet to begin. I couldn’t find the door at first, but someone helped me and directed me to the end of the rectangular building where the entrance was located. The neon lights gave it the feel of an international airport, and when the ticket collector asked for my ticket, I felt like I was on foreign soil with my non-European passport. The theater space itself consists of a flat-to-ground stage, and a steeply-raked auditorium, from the top of which it appears like you’re watching the show from the second floor, looking down on the actors’ heads.

Coriolanus marks the end of a difficult year for the National Theater. As well as the difficulties posed by the pandemic, there was also the lack of an artistic calendar. After Animal Farm (10th July 2021) and Edmond (19th November 2021), Coriolanus was the third and last premiere of the year. A massive production with over 40 extras and 20 actors on stage, as well as nearly 20 other crew members.

Coriolanus is set in ancient Rome in which people rise up and demand that the current ruling system be removed. After a successful battle, Caius Marcius, a famous general (played by Gazmend Gjoka) is given the name “Coriolanus.” He becomes engaged in internal and international strife as his mother, Volumnia, urges him to build on his fame and become a Roman consul. But he is fundamentally unsuited to politics. Coriolanus makes no secret of his contempt for the plebeians, “whose breath I hate as the reek o’ th’ rotten fens.” His refusal to court their good will leads to his banishment. This causes a turn of events for his nation, as a vengeful Coriolanus switches allegiance to Rome’s enemies, the Volscians, and returns to Rome as an invader.

Ilirjana Basha’s stage design with Roman columns atop a triple staircase takes us right to the heart of the play: power. Different characters climb the power ladder, as if to represent the oscillations of power from one side to the other. Basha’s costumes are diverse, and while they don’t perfectly resemble the Roman period, they also don’t contradict the performance and they allow us to immerse ourselves in the tumultuous period that the play portrays.

The use of stage combat at the National Theater is a novelty, with the fight scenes choreographed by expert Marco Rubboli, who came from Italy to create the stage combat for Coriolanus in collaboration with choreographer Robert Nuha. We are used to seeing battle scenes with many people in movies, but not in theatres, and this is the most interesting aspect of the performance.  At the moment of fighting between the two armies, the scene becomes slow motion under an electric blue light. The effect is akin to battles in films like 300 Spartans, but aside from the spectacle of sword-play, this seems unnecessary.

When the battle scenes centre on only two actors they work less well. The ‘warriors’ appeared to be hesitant to fight, which makes their movements feel sloppy and uncoordinated. Perhaps a few extra rehearsals might improve the quality of these fights. Guards of the Volscian in Coriolanus, National Theater of Albania

Coriolanus is one of Shakespeare’s most opaque heroes. Unlike Macbeth or King Lear, the main character doesn’t have any major monologues and one must retain an inward attitude to better understand the character. Gazmend Gjoka’s performance as Coriolanus does not enhance comprehension of the tragedy. He appears to be unsure of himself and makes no attempt to justify his conduct. The dialogues appear to lose weight in the face of the play’s focus on spectacle, and the words, which are the true driving force of Shakespeare’s works, are relegated to the background. It’s unclear whether this is due to the adaptation or translation of the text, or the direction of the performance.

In Shakespeare’s play, Volumnia is an ambitious woman who values the glory her son can bring to their house more than his own life. Playing her, Luiza Xhuvani uses a ‘hyper-theatrical’ intonation, subduing Coriolanus’ supposed aggression, and making him appear as a little boy. But, at the same time she appears as a traditional mother full of tenderness and compassion, creating a contrast between what is said and what is shown. Even in the scene where both Volumnia and Coriolanus’s wife Virgilia (Elia Zaharia) are trying to convince him to give up his bloody crusade, it seems as if Volumnia orders Coriolanus not to attack. The noble warrior’s vulnerability toward the two women of his life has been oversimplified, making the inner dilemma of the character fade to invisibility.

Viktor Zhusti, in the role of Menenius Agrippa, Senator of Rome, is the connecting bridge between other actors. He is like a wise old man who can offer advice but the power is always in the hands of others.

The plebeians, a group of about 40 extras, students at the Academy of Arts in Albania, bring the play to life and convey the chaotic state of the city, which is manipulated by their chosen representatives, tribunes Junius Brutus (Hervin Culi) and Sicinius Velutus (Genci Fuga). As puppet masters, the two cunning politicians command the crowd while maintaining their power and brilliantly bringing to the stage the true face of populist politicians.

Like putting Shakespeare in parentheses, the show opens and ends with the same scene, a ceremony honouring a hero. Caius Marcius Coriolanus is portrayed as a hero but I couldn’t understand why. He is a great solder, yes, but is this enough to be a hero? He despises the people of Rome, and after his banishment, he returns as an invader to the city. Maybe Coriolanus’ sad fate is exactly that: the tragedy of not being a hero.

The spectacle of the sword-fighting and the hilarity of the guards of the Volscian capital of Antium were the scenes that had the most impact on the audience. This suggests that spectacle was the main aim of this production, Shakespeare’s play simplified.

On my way home, I had to pass by the location of the former national theatre building. It is not known when they will start to build the new national theatre, but until then, the land remains deserted.

Further reading: Gresa Hasa on the destruction of the National Theater of Albania